On a Friday night, veterinarian Jimmy Payne was treating his wife, Phyllis, to a steak at Greensboro, Alabama's, Mustang Cafe when local banker Harris Coleman stopped by the table to say hello. "Now, that's a man that knows the value of a dollar," says Payne, as the banker walks away.

He explains Coleman had a sick cow, and by the time Payne got to her, the cow had died. In Alabama, if a cow dies or is euthanized, the state pays $100 to the owner if a veterinarian submits the animal's brain tissue to the state lab. The vet who takes the sample also gets $100.

As Payne tells it, he asked where the dead cow was, and Coleman told him he had buried her. When he heard about the $100, Coleman cranked up his backhoe and dug up the cow. That pretty well sums up Payne's ideas about running a cattle operation: Every dollar counts.

COW CHORE WINDOW. The 74-year-old veterinarian often doesn't leave his clinic until 8 or 9 p.m., unless there is an emergency. Then all bets are off. The long hours are only possible thanks to his wife, Phyllis, who helps run the Greensboro practice, and has acquired her own impressive set of cattle handling skills.

Whenever possible, though, it's Payne and Border Collie, Sadie, who tend his 60-cow Angus herd, which includes about 30 sale bulls, 44 yearlings and 2-year-old heifers. Cow chores are allotted the only time slot available, 7 to 7:30 a.m. With a feed auger that meters 60 pounds of soy hulls and corn gluten per minute into troughs, he feeds the bulls in less than 30 minutes.

With the cows, Payne rations out up to an acre and a half of pasture. He estimates they graze each square foot three times a year. Their daily allotment may include bahiagrass, crownvetch, wild barley, foxtail, crabgrass, common bermudagrass, kudzu and Durana clover. If he has any bare spots after a timber cut, he adds ryegrass to prevent erosion.

WEEDS AS FEED. When weeds are short and tender, Payne says cows will eat them, ragweed and all. "You've got to have enough cows to eat the grass and the weeds, too. It is a thin line. You learn. They'll eat 70%, trample 20% and leave 10%," he notes.

If the weeds get bad, he borrows a wick from a neighbor or hires part-time help to spray pastures. Mostly, his weed-control program consists of two plastic spray bottles in the floor of his pickup. One filled with 2,4-D, the other with Roundup. When he checks cows or moves a fence, he'll whip one out and spray. He says spot-spraying helps him avoid killing clovers which, along with cow manure and urine, define his fertilizer program.

While moving 60 cows and a fence every day doesn't sound like a time-saver, Payne insists his rotational-grazing system saves time and money by cutting down on the need to put up and feed hay. Cows, he says, can harvest grass for one-third the cost of diesel.

Like the cows, replacement heifers and bulls are also on a rotational-grazing system. Twenty-two heifers are on 100 acres, moving every two weeks when mineral troughs get checked. Payne makes the moving process faster with drive-through gates made from PVC pipe, salvaged metal from cattle panels and wood scraps.

HEAT-DETECTION CRAYON. Given Payne's zeal for saving time and money, you'd think he'd only use natural service. Nope. This man's herd is 100% AI (artificial insemination). And, they are on a tight 65-day breeding season starting around Christmas.

He times pasture rotations so cows are at the barn when it's time to AI. He freeze-brands cattle along the back of their hip to help with identification. Then, while they get their soy hull/corn gluten supplement, he marks their tail heads with a crayon and notes which cows have been riding. "Heat-detection patches cost money," he remarks. "I can buy a crayon for 70 cents. Plus, if I remark every cow every day, it forces me to look at her."

If a cow's crayon mark has been rubbed off, he gets her bred. After five days of checking heat and breeding, he gives an injection of prostaglandin to any cow or heifer he hasn't seen in heat. Three days later, he usually has a flurry of 25 to 30 cows in heat. Normally, he'll get 70% bred on the first service. But, even a veterinarian with years of experience isn't perfect. "I only got 58% bred on the first service one year," he notes. "They were too thin. I made them eat too many weeds."

By the time the breeding season ends, Payne usually has 90% of the herd bred. He culls at this point, keeping an eye out for bad feet or a prolapse. He sells any bred heifers he doesn't need as replacements.

HEIFERS GET A PASS. Payne may sound like he's on track for cattleman of the year, but here's the practice that practically puts animal scientists and economists into shock—he waits to calve heifers until they are 3 years old. This effort is contrary to every Extension recommendation available, but it fits Payne's operation.

"I used to calve them at 2, but I couldn't get them to rebreed," he says. "Calves were 150 pounds lighter because I don't creep-feed. Now, I breed them at 27 months to calve at 3. We don't have any calving difficulties. They fit the program here.

"You can't starve a profit out of a cow," Payne explains. "But, there are three things you can do to improve your bottom line: Sell more product, sell it for more money or cut expenses." He guesses his annual variable cow costs are around $350.

"It depends on what you include. My business plan is, do what makes it work," he says. "I tell folks, 'You have to do something a little different to show a profit.'" 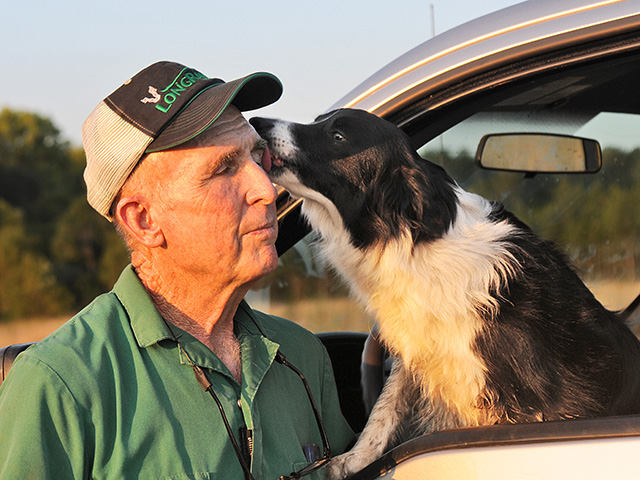