OMAHA (DTN) -- In a growing season where some regions of the Western Corn Belt have seen too much moisture, other areas have seen very little of it. From east-central Kansas into north-central Missouri, scant amounts of precipitation have led to crops withering in the field, leaving livestock with little to eat or drink.

Some areas are worse than others, but farmers in Kansas and Missouri said the drought area will grow in size the longer it doesn't rain. Moisture may still help soybeans, but it's too late for most of the corn.

The Southern Plains were dry this spring and these conditions have spread north and east. A large area from central Kansas east through north-central Missouri has received limited moisture.

Northern Missouri, for instance, has generally had only 4 to 8 inches of precipitation since mid-April, said DTN Senior Ag Meteorologist Bryce Anderson. This would be anywhere from 50% to 75% below average, he said.

Calculated soil moisture shows a deficit of 4 inches or greater in these areas. The dry conditions extend from the Southern Plains into northern Missouri and into southeastern Iowa and western Illinois.

However, Missouri has had the worst of those three states by far, he said.

"This is the first time since mid-July 2012 that northern Missouri is in Level 3 (extreme) drought," Anderson said.

Adam Casner, a row-crop farmer from Carrollton, Missouri, said he had moisture during planting this spring, but the weather has been dry since. Rains have been spotty, but he estimates he has only had 3 inches since Easter, and the last rain over an inch was back in the middle of March.

Casner said his region of north-central Missouri had "a tremendous yield potential" as they were able to fertilize, plant and spray crops in a timely fashion this spring. Dry weather during and after corn pollination, however, has led to many pollination issues and quite a bit of tip-back on ears, he said.

Further west into east-central Kansas, Jacquelyne Leffler was busy cutting silage on her farm near Americus, Kansas, the second week of July. Her home area of Lyon County has only seen about 1.75 inches of rain since Memorial Day, she said.

Leffler and her family run stocker and feeder cattle on grass in the Flint Hills region, and they will feed out some cattle along with growing crop. With the limited moisture, they decided to salvage their corn crop.

"This might be the earliest we ever have cut silage," Leffler told DTN. "Typically we cut around the first part of August."

Leffler said the corn was so damaged from drought conditions, the crop didn't even form ears.

She estimates the feed without ears could be anywhere between 50% and 70% of the normal nutritional value of silage. Their plan is to mix it with hay and grain from last year until they run out, she said.

Leffler said the grass on their pastures is quickly drying out, just as pasture ponds are. The grass is struggling, and they will be lucky to have another two weeks of grazing even with lower stocking rates.

"The grass is critical right now," she said.

While Casner does not raise cattle, he said cattle producers in his area are really struggling as well. Many of his neighbors who have cattle are already feeding hay as the grass and ponds have dried out. Cattle producers are also pumping water out of wells or tapping into rural water to get water to their livestock.

There is a lot of talk of chopping quite a bit of silage and maybe even baling beans if it comes down to it, Casner said.

On the positive side, the drought conditions have not yet seemed to have damaged soybeans.

"The dry weather hasn't seemed to bother the early beans, they are branching and blooming nicely," Casner said. "Late beans have struggled with emergence as soil moisture has to be 3 to 4 inches below ground at planting."

Conditions in northwestern Missouri are not as dire as they are in more central locations of the Show-Me state.

Bob Birdsell, who raises cattle and crops near Stanberry, Missouri, said his part of the state has been dry in recent weeks, but they were able to catch rains earlier. He estimated they had 5 inches in May and 2 inches in June.

The corn looks pretty good other than some reports of gray leafspot and some pressure from beetles and armyworms, he said. Soybeans also look fairly decent, although on some fields, signs of stress are evident.

With limited rains over the last few weeks, the grass is really not growing much. He recently baled a 55-acre fescue field and only got 95 round bales compared to the 163 bales he got last year.

"I think the hay was shorter this year more due to the cold conditions we had back in April when it was supposed to be growing and it wasn't, than the dry conditions we have seen in recent weeks," Birdsell said.

The coming weeks will be important for the crop of northwest Missouri, Birdsell said.

If rains were to fall (and there is a good chance this weekend) crops could still yield fairly well. However, if it stays dry, then all bets are off.

Birdsell said if it stays dry, many farmers in his area with livestock might resort to cutting silage, a practice not seen very often there. There are some custom choppers in the area and they might see an increase in business, he said.

"I think most anyone with livestock would be willing to cut silage with hay prices where they are," he said. "I have seen anywhere from $80 to $120 for a large bale for mixed-grass hay." 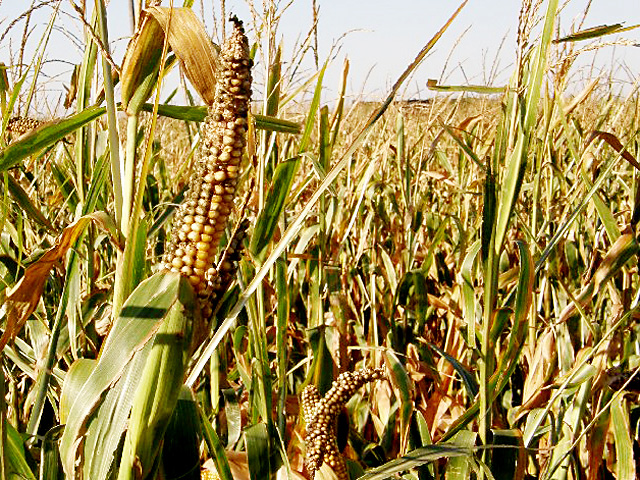