MEAD, Neb. (DTN) -- With the number of row-crop acres growing and the number of forage acres shrinking, Midwestern beef-cattle producers have responded by increasing the use of corn silage in their operations, according to speakers at the Silage for Beef Cattle 2018 Conference.

The increasing use of silage in cattle rations was one of the topics discussed at the conference held June 15 at the Eastern Nebraska Research and Extension Center (ENREC) located near Mead. The daylong event was sponsored by the University of Nebraska-Lincoln (UNL) Extension, Iowa State University Extension and Outreach, and Lallemand Animal Nutrition.

SILAGE GROWING IN USE

Silage has been an important component of cattle-feeding programs dating back to the 1880s, according to Jason Warner, nutritionist with Nebraska-based Great Plains Consulting Inc. However, with more fields being planted to corn over the last decade and less alfalfa and native grasses being grown, the feeding industry has responded by altering the type of forages used in rations, he said.

Warner said a survey of consulting feedlot nutritionists was done in 2007. He said 31% of respondents said they used alfalfa hay as the primary or secondary source of forage. The same survey was completed in 2016, and it showed only 20.8% of nutritionists were using alfalfa as their forage.

"The land-use shift from hay and pasture towards crops is very real and is contributing to the increased use of crop residues," Warner said.

The use of silage offers a benefit for many cattle operations, particularly with those who own or rent ground, he said.

The average number of acres of silage harvested by Iowa producers was 129 acres, with a range from 8 to 1,000 acres. Reported yields ranged from 20 to 31 tons per acre, he said.

The moisture levels of silage cut by Iowa producers averaged 63% while the full range was 55% to 66%. Loy reported that 60% of producers used custom harvesters, 58% used inoculants and 72% used kernel processing.

As for storage, 37% of Iowans responding to the survey had a bunker storage facility while 32% used silage bags. Eighteen percent had drive-over piles, and 13% stored silage in upright silos.

"The survey showed Iowa producers are adapting to new technologies in the harvesting of silage," Loy said.

Warner said the largest advantage of using silage is having a high-quality feed stored in inventory, although harvesting silage represents a significant time and monetary investment. Another advantage includes utilizing the crop if drought has damaged its ability to make grain. Silage is also a good energy source and works well in rations with dry feeds as well as wet ethanol byproducts, he said.

Warner said a disadvantage to silage is that once it has been chopped and packed, it must be fed, unlike hay, which still can be sold more easily since it can still be transported. Another disadvantage is that silage has to be chopped and stored correctly to assure feed nutrition quality. Silage that is not put up and stored correctly could end up wasting thousands of dollars of potentially high-quality feed, he said.

Corn silage is a viable option in a finishing ration, as it provides both a good source of energy and roughage, said Allen Stateler, nutritionist for Nutrition Services Associates based in northeast Nebraska. Finishing diets are formulated to provide rapid, efficient, cost-effective growth to achieve a desired end weight and carcass composition, and silage fits the bill, he said.

When the silage is cut will have a large effect on the nutrients in the feed, Stateler said.

The more mature the corn plant is, the higher the starch content, and energy yield per acre will be higher. But the crop also will be harder to properly pack and ensile due to lower moisture, he said. Corn silage is easiest to pack and ensile when the dry matter of the whole plant is in the 32% to 38% range. However, the weight of the grains, cob and husk is not maximized until the whole plant reaches somewhere in the 45%-to-55% dry matter range, he said.

"In a perfect world, we would have kernels that are mature to black layer while the plant dry matter remains at or below 40%," Stateler said.

Galen Erickson, UNL professor of animal science, has conducted numerous experiments in the past seven years on elevating different amounts of silage in finishing cattle rations. In five studies, he compared feeding 15% inclusion of silage in a ration to 45% inclusion in finishing cattle. Average daily gain (ADG) decreased by 5.2% by increasing silage levels, he said.

In other studies, yearling calves fed 45% silage tended to eat more with less impact on ADG, he said. In most studies, cattle were fed on the same days, which resulted in cattle being marketed with slightly lower marbling scores and fatness.

"Despite being economical, no producers have adopted this practice of elevating silage inclusion (in a finishing ration)," Erickson said.

A silage growing program will normally contain 70% silage or more, he added. 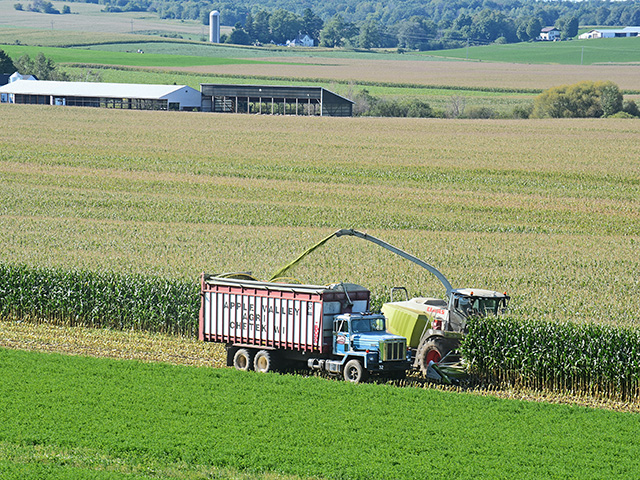