OMAHA (DTN) -- Investigators at the Food and Drug Administration spent the past two months trying to track the source of romaine lettuce linked to 172 confirmed illnesses, 75 hospitalizations and at least one death. The FDA found at least one Arizona farm involved but agency investigators can't confirm if all of the illnesses came from one grower, harvester, processor or distributor. They are still looking.

Several consumer groups wrote the FDA last week pressing the agency to propose rules for "comprehensive and rapid traceability of produce, including leafy greens." The groups noted FDA has struggled in the past to find the source of outbreaks.

"This failure to fully solve this outbreak comes on the heels of another unsolved E. coli outbreak linked to leafy greens last fall," the groups wrote.

Among the solutions, the consumer groups wrote to FDA, is blockchain technology. While FDA is taking months to find the source of a food outbreak, retailers and others have traced products from the store back to the farm in as little as 2.2 seconds.

The consumer groups pointed to a collaboration between food companies such as Tyson Foods, Nestle and others working with IBM since late 2016 to identify areas where the food supply chain would benefit the most from blockchain. Food traceability was at the top of the list.

To test their theory, Walmart took seven days to trace the origin of a shipment of mangoes. Using a digital ledger, it took 2.2 seconds to do the same thing. (https://goo.gl/…)

Blockchain remains largely associated with crypto-currencies such as bitcoin. But the core product of a digital ledger not only helps ensure secure transactions, but provides a source trail of a product: All of the records of ownership and movement are digitally held in blocks of data.

A broad array of industries are delving into blockchain transactions for supply logistics, but that traceability component is making blockchain ledgers more attractive in the food industry.

Using blockchain for food is still in its infancy, but there are more examples of tracking products such as mangoes, tuna, milk or avocados from the restaurant back to their origins. Startup companies are popping up to create the platforms for sellers, buyers and consumers.

The Produce Marketing Association didn't want to comment on the consumer groups' letter specifically, but the group pointed to industry requirements and efforts already underway to trace foods. PMA also noted that some of its members are already involved in pilot projects looking at the practicality of blockchain to find the source of an outbreak. "Blockchain theoretically presents opportunities to aid and speed traceability, though time will tell exactly how, its practicality and what that might look like," PMA said in a statement to DTN.

Earlier in May, Farm Credit lender CoBank released a report about the rapid growth of blockchain and the changes it could bring for agriculture. Tanner Ehmke, manager of CoBank's Knowledge Exchange Division, said the technology offers revolutionary change for food traceability, tracking commodities and the grain trade overall. CoBank hasn't directly been involved in any blockchain trades, but Farm Credit lenders are getting a lot of questions.

"We're getting a lot of interest about what's going on. That's the main thing," Ehmke said. "Everyone's curious about it. As for uses, we haven't done anything here, but we're looking at it and have our IT department looking at it, as are most banks."

The main emphasis initially is creating more ease of transactions. Blockchain means less paperwork and more security for logistics and the supply chain. CoBank sees blockchain accelerating traceability for both farmers and consumers. That also will likely lead to more scrutiny, but also increased sales in the grain sector because of identity preservation.

GETTING CLOSER TO CONSUMERS

"That's ultimately where this goes is value creation for farmers tying themselves to the supply chain closer to the consumer, specifically consumers interested in having more information about where their food comes from," Ehmke said. "So there is an opportunity to create value in that."

Ehmke points to a Denver coffee shop in which consumers can use a QR code to trace the cappuccino. "You can see all of the transactions that took place with that coffee all the way to the grower," he said. "If these people are willing to pay money for that information, then blockchain is how you get that information to them. So I think that would be an opportunity for farmers to use this technology and to profit from it."

The problem, Ehmke said, is how does this technology unfold in commodity agriculture with such a variety of information technology systems? "We have a lot of co-ops with IT systems from a couple of decades ago. Are they going to be able to migrate to a new system? Probably, but the question is what kind of timeline is that?"

Rod Snyder, president of the sustainability group Field to Market, said blockchain ledgers have been coming up more in the group's conversations during the last six months with member companies. IBM presented to the organization about its work with Walmart in China. Snyder sees potential; he thinks food safety will drive digital ledgers more rapidly, but eventually migrate into moving agriculture's sustainability data through supply chains as well.

"I think we're a long way from that being a reality and in the United States, where there are generally fewer perceived risks like deforestation or illegality of supply chains or child labor, you probably won't see that much pressure around that level of traceability," Snyder said. "I just don't know if companies are going to prioritize that. So right now there is a lot of chatter, but not a lot of examples yet how it would come to play in the sustainability space."

Louis Dreyfus Commodities made a big splash back in January with a soybean sale to Asia using blockchain ledgers. That remains LDC's only major blockchain transaction, but Robert Serpollet, global head of trade operations at LDC, said the test trade helped the company "realize the immense potential of blockchain." LDC is taking steps to make these trades more commonplace. Still, Serpollet said there is more work to go from proof of concept to scaling up the commodities industry.

Earlier this month, London-based HSBC and ING Bank announced they had used a blockchain platform from the firm R3 for a shipment of soybeans from Argentina to Malaysia, through the Geneva-based trading arm of Cargill Inc., with another Cargill subsidiary in Singapore as the buyer. The banks cited that such a deal normally takes between five to 10 days to complete paperwork, but ended up getting done in 24 hours.

Cargill did not respond to multiple queries from DTN. In the news release announcing the sale, Cargill Regional Treasurer Rani Misra said the company believes blockchain is a "key technology" and Cargill is exploring with more customers.

"Simply put, we took a highly manual, complex transaction and made it more secure and efficient," Misra said. "We see the exciting potential of extending this technology into other areas of our financial ecosystem."

While most blockchain trades or deals in agriculture for now seem to involve larger companies, there are startups out there looking to bring the technology closer to the individual farmer. Luis Macias, co-founder and CEO of GrainChain, a Texas-based software developer, is starting to test a platform called GrainChain. The app would basically allow farmers and grain elevators to make sales outside their normal circles. GrainChain pays using a crypto-currency, "tokens" that Macias said is backed by U.S dollars.

"Eventually what we're looking at doing by the end of this year is give them a marketplace to be able to sell on a more open forum," Macias told DTN. "It's definitely going to be a downhill process. Our target isn't the specific farmer. Our target is going to be the grain elevators, the co-ops and the larger buying facilities. Our farmers are just getting the benefits, but we are working closely with the farmers so they understand the process."

In a pilot project expected to start in September, Macias said 500 farmers will get help to deal with office logistics so they're more seamless and digital. Farmers will also have the security of third-party verification on payment, Macias said. Beyond farmers in the U.S., Macias has also been going to blockchain events in Central American and Europe to seek customers as well.

"Blockchain is not just crypto-currency but allows for security in those transactions," Macias said. "All of these products also provide an element of down-to-field-level traceability of the purchases. I think eventually everyone is going to have to be in this kind of scenario to do profiteering." 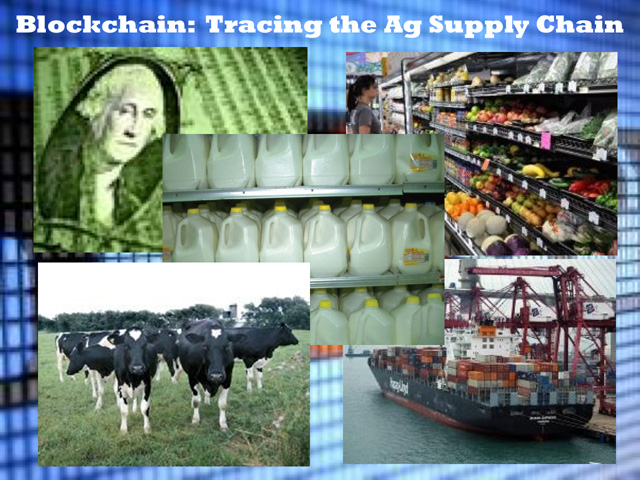