If my remote control could talk (I know, you can get one that can), it would no doubt rat me out as the world's worst TV critic. More times than not, my idea of cable surfing is limited to the predictable waves of "Pawn Stars," "America's Got Talent" and countless reruns of "The Big Bang Theory."

Yet there are those rare moments when I somehow manage to stumble into viewing a production of rare quality and insight. That's exactly what happened last night when I watched an amazing series on PBS called "First Civilizations." The particular episode that left me dazzled was entitled "Trade." It was a fascinating story of the ancient (though contemporary) connection that links agriculture, trade and the common good.

Skip the next installment of "Survivor" and seek out this extremely well produced and thoughtful documentary. Beyond your kid's first birthday, your daughter's wedding and your banker releasing your mortgage lien, I'm not sure life really has too many "must-see" moments. Nevertheless, this show could be one of them.

This show begins with an intrepid archeologist climbing a sheer canyon wall in the northern mountains of Oman (i.e., a small Arab country on the southeastern coast of the Arabian Peninsula). When he eventually crawls to a primitive display of "rock art" over 4,000 years old, the etching depicts a man surrounded by animals and holding a bull in both hands.

But here's the strange part. The bulls were drawn with large humps, clearly suggesting the Zebu breed of cattle -- livestock native to southern India, several thousand miles to the east.

Furthermore, graves scattered across the canyon floor contained pottery and copper ornaments from foreign merchants who once populated the large cities of the Indus Valley (i.e., the fertile flood plain of the Indus River, which today runs through Pakistan and northwest India).

In short, evidence like this has identified the sprawling trade network -- the first of its size and intensity -- of the great Indus Valley civilization, a society of enormous wealth and sophistication that peaked between 2500 and 2000 BCE, surpassing many of the accomplishments of Mesopotamia and Egypt, especially in terms of foreign trade.

An articulate team of archeologists, scientists and historians then began to describe how the Indus Valley Civilization developed; planning cities with population of 50,000 or better, engineering groundbreaking infrastructure like indoor water and toilets, building huge cisterns to catch rainfall that were actually designed to resist the damage of earthquakes and mapping trade routes that stretched from Arabia to northern China.

But what really caused my interest to soar was when the program's narrator asked exactly why the Indus Valley had uniquely become such a thriving epicenter of peaceful prosperity. The fundamental answer was extraordinary agricultural efficiency and production.

Before population can grow, before cities can be built, before commercial artisans can thrive, and before the seed-wealth of trade can develop, a society must be able to abundantly feed itself with a large plate of leftovers to burn.

All the fine art and magnificent buildings and creative thinking behind the great civilizations of the world surely owe successful farming an enormous debt. Only by ensuring long-term food production can people risk pursuing other forms of wealth. Of course -- once that critical Rubicon is successfully crossed -- riches, trade and increasingly elaborate trappings of civilization can grow faster, and more relentlessly, than compound interest.

To country readers, this may sound like common sense made hard. Yet, sometimes I shake my head at the severity of today's urban critics when it comes to acceptable agricultural standard of production, savagely biting the hand that feeds them as if their lifestyle could easily be sustained without it.

So, how did the Indus Valley excel in food production, sponsoring one of the greatest societies in the ancient world? Located between the generous climate of the eastern Mediterranean Sea and the monsoon rains of southern India, Indus Valley farmers enjoyed both winter and summer rainy seasons, allowing them for hundreds of years to regularly plant and harvest double crops.

Of course, until the two weather fronts stopped working so well together. Sometime before 1900 BCE, an extended period of drought caused Indus Valley food production to implode. We know this becomes that was the year commercial seals (think of seals as small stone pieces, as pictured in the accompanying photo, serving the same purpose as scale tickets, receipts or calling cards) disappear from the archeological record.

Once the foundation of food security crumbled in the Indus Valley, social standards and relationships quickly went to hell in a hand basket.

Here's one last word about what all of this told me about global trade, a reality that has grown so critical for U.S. grain and livestock producers. While trading a small amount with a friendly neighbor can be easy enough, trading with strangers is hard work, hard work that requires the tough expenditure of trust. As the merchants of the Indus Valley found out, the trust-engine of trade is much easier to start and keep running when your own belly is full.

U.S. agriculture can take great pride in its strength and productivity. In fact, farmers and ranchers in a real way sponsor much of the nation's wealth and global enterprise. This basic reality should always afford producers a place at the decision-making table on international trade, something we too often forget. 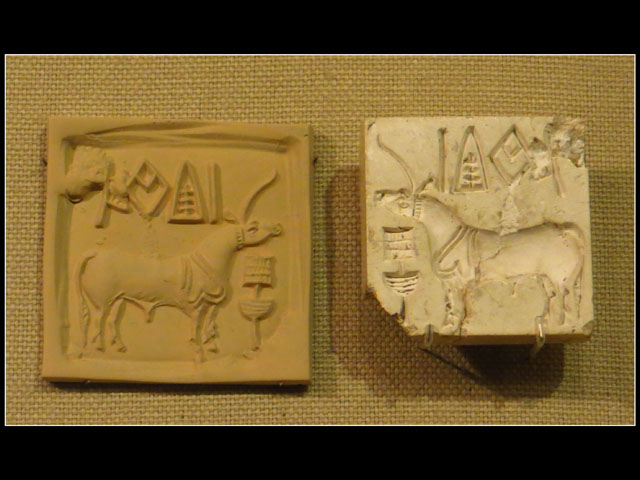