OMAHA (DTN) -- Tech giant Microsoft is working to eliminate the broadband gap in rural areas, but the company needs rural residents' help to accomplish that goal, a company executive said on Wednesday.

Speaking at the Nebraska Rural Futures Institute on the University of Nebraska-Lincoln campus, Shelley McKinley, Microsoft general manager of technology and corporate responsibility, said high-speed internet in rural areas is now a necessity of life, and the push to expand access is similar to providing electricity to rural areas in the 20th century.

During the forum Wednesday, McKinley detailed how Microsoft was aiming to improve rural connectivity through a multi-focused plan called the Rural Airband Initiative.

Roughly 25 million people in the country don't have access to broadband internet, with about 19 million of those people living in rural areas, she said. The plan, which was started in July 2017, calls for connecting 2 million people to the internet in five years and closing the broadband availability gap by July 4, 2022.

"It is a hybrid approach to help cover every rural resident," McKinley said.

While the private sector can play a leading role in closing the rural broadband gap, the public sector also needs to play a part, she said. Among the methods Microsoft wants to utilize to get high-speed internet out to rural areas is to use the TV white spaces spectrum, which is administrated by the Federal Communications Commission (FCC).

McKinley described TV white space as the grainy channels on your TV that are not being used by broadcast channels. Microsoft wants the FCC to ensure the continued use of these channels and provide even more spectrum. There are two channels in use now, and another one could be possible, she said.

One advantage of using TV white space in rural areas is that this spectrum has the ability to go through natural barriers such as trees, she said.

Rural residents need to have "a call to action" and should contact their elected officials about expanding white space access, McKinley said. These politicians then have to push the FCC to allow more of the white space spectrum to be used for rural connectivity.

"This is an issue of national importance," she said.

McKinley said public-sector federal and state infrastructure investments need to be made. This should include targeted funds on a matching basis for capital investments that will best expand coverage into rural areas that currently lack broadband access, she said.

Microsoft's Rural Airband Initiative calls for the company to invest in partnerships with local telecommunication companies and digital skills training for people of all ages and to stimulate investments by others through technology licensing.

Matt Larsen, CEO of VistaBeam Internet, which is based in Gering, Nebraska, said he is happy to see Microsoft get involved in providing broadband to rural areas. Larsen started VistaBeam in 2004 to provide broadband access to some of the most rural and sparsely populated parts of western Nebraska, eastern Colorado and eastern Wyoming.

"We are really excited to see Microsoft get involved in this," said Larsen, who also spoke during the presentation. "We believe in rural connectivity."

While Microsoft's plan is to mainly utilize TV white spaces to provide broadband to rural areas, the company is also looking at other technologies -- such as fixed wireless and satellite coverage -- that could work for other rural regions.

According to a Microsoft factsheet on the Rural Airband Initiative, TV white space is expected to provide the best way to bring broadband to approximately 80% of the unserved rural populations, especially in areas with a population density between two and 200 people per square mile.

McKinley pointed out that quite a bit of FCC data is flawed when it comes to internet availability in rural areas. She used the example of a county in eastern Washington that the FCC said was covered by several companies in terms of having access to internet. In reality, there was no internet service for most of the county.

"We need to work to get better data," McKinley said.

McKinley also mentioned artificial intelligence (AI) in her presentation as "a game changer" for the future.

While the term may be scary to some, empowering devices to merge the advantages of computers and humans into one technology could help solve various issues in the future, she said. She specifically pointed out that these technologies could help people with disabilities function more efficiently in the future.

Microsoft currently has a Seeing AI app for iPhones. She demonstrated the app by pointing her phone at a member of the audience in the front room during her presentation.

The app correctly identified a 47-year-old male "with a happy look on his face" watching her presentation. The man confirmed his age to McKinley.

"We have to approach this in an ethical way," she said. "There has to be fairness, reliability, safety, privacy, inclusiveness and transparency all factored in." 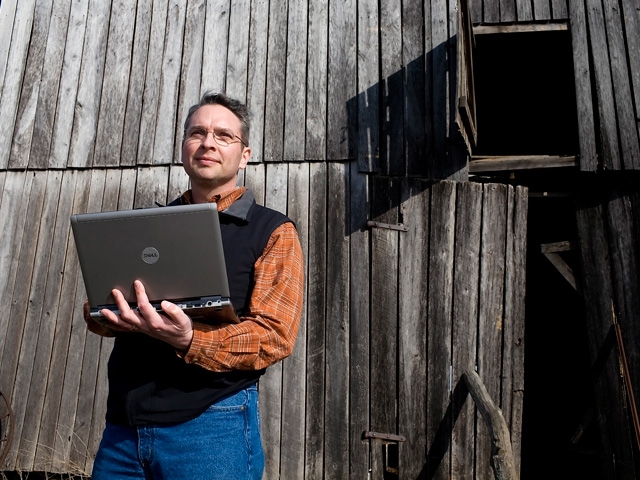