"Come on girls, over here, over here," Kim Cullen-Goertz hollers to a small herd of cows grazing on the windswept plains of eastern Wyoming.

Soon, she is surrounded by several dozen registered and commercial Red Angus cows. "They're all easy keeping," she says. "The ones that aren't don't make it in our program."

Like a growing number of producers across the country, Cullen-Goertz is diligently working to fit her cows to the environment. She's also employing a number of strategies to create and maintain the most efficient cattle operation possible.

"I love ranching and raising cattle," Cullen-Goertz says of her role at the ranch. Her husband, Jason Goertz, has that same passion for the farm side of the family business. "Jason loves to farm, so he oversees our wheat, oats, millet, hay and cover crops," she says. "We're in it together when it comes to decision-making, but when it comes to our work, we generally go different directions each day."

For Cullen-Goertz, that has meant managing 850 head of cattle with minimal help except during the busiest times of the year. She's built two distinct cattle operations, spring- and summer-calving herds. That division spreads out the work, as well as sales, which now includes an online auction in January and a traditional on-site auction at Torrington Livestock Markets in November.

Thanks to that division, the cattle business can be run with one part-time employee and several trusted friends who work on an as-needed basis.

"They pay us to run a few cattle they own, and we, in turn, pay them when they help us during busy times, like weaning and preg-checking," Cullen-Goertz says. "They all truly love ranching and know how to work cattle. This gives them an opportunity to do that while still holding down their regular jobs. It's a really good fit for all of us."

Cullen-Goertz and her husband have given the cattle side of the business a financial emphasis, choosing to build a herd of registered and commercial Red Angus by putting profits into cattle instead of land for the time being. Of the 850 head they manage, 250 are registered Red Angus, 100 are commercial and 200 are yearling heifers used in the ranch's breeding and sales program. They manage another 300 commercial Red Angus owned by the Goertz family.

"We run all of the cattle in both our spring- and summer-calving herds on 18,000 leased acres. It takes a lot of acres per cow on this dry rangeland," she notes, adding that they hope to begin acquiring deeded ranch and farmland in the coming years. But, she stresses, her passion is for cattle and genetics, the latter of which play heavily into the ranch's plans for growth.

Cullen-Goertz comes to her role well-versed in genetics. She graduated with a degree in animal science from the University of Wyoming in 1996 and worked for Cow Country Genetics, a northwest Wyoming-based company specializing in embryo transfer. She later started her own custom artificial insemination (AI) company in 2000.

"That was a cattle-related business I could begin with little capital, and it also gave me a financial foundation to start building my own registered herd," she says. By the time she began focusing all of her energy into ranching, she and three to five helpers were breeding 6,000 to 7,000 cattle annually. She got out of the AI business in 2015.

However, the expertise she developed means Cullen-Goertz and that same crew are able to synchronize and AI all of the ranch's cows and heifers, while at the same time confining the calving season to no more than 60 days. Conception rates on AI run 60% to 80%; cleanup bulls are used afterwards.

Cullen-Goertz is also using her training to take advantage of embryo transfer (ET) as a means to cost-effectively grow the number of registered Red Angus in the herd. Her emphasis now is on the summer calving part of the operation.

"Over the years, we built a spring-calving herd on our marketing line of 'functional, fertile and efficient,' and we started putting those genetics into the summer herd," she says.

They flush embryos from their best registered cows and also typically buy one package (four embryos) each year to try other genetics. These embryos, in combination with those frozen from previous years, are transplanted into 60 to 70 of the 300 commercial cows they run on shares with Jason's parents, eastern Wyoming ag producers Cindy and Gregor Goertz.

"We don't know how many times, or cows, we will have to flush until we get the embryos we need. It has varied from zero to 22 embryos per donor cow per flush," Cullen-Goertz says. "Last spring, we did very well and got more than 50 embryos out of three donors, so we did not have to do any additional flushes."

Cost for the process last year was $212 per embryo, which included collection through transfer to a recip cow. A 60% conception rate, however, bumps that price up an additional $414 per head; but even at that, Cullen-Goertz says, it's a reasonable investment for the high-end genetics on which they are focused.

Concerning recipient selection, she notes, "I look a lot at disposition since I tag, vaccinate and weigh calves at birth. It's also important the cows have a history of raising a healthy calf."

In the past five years, Cullen-Goertz and her husband have retained about 50 registered Red Angus heifers for their summer herd from that ET program. Based on current grass resources, their goal is 75 head.

"We're looking for traits that are important to us and our customers, including being able to make it on their own without a lot of inputs," Cullen-Goertz says. "Had we gone out and bought that quality of females, gosh, they would have cost us around $250,000."

"We're taking the same herd of commercial cows and are both getting our own specialized product," Cullen-Goertz says. "Jason's parents are getting nice feeder calves, and we're getting registered calves for a fraction of the price."

Along with maximizing the quality of their herd's genetics, Cullen-Goertz says they have one more way to boost ranch profits.

"I'm calling it the third wheel of our cattle operation," she says. "We buy heifer calves from some of our bull customers, and then we AI them to add value."

This allows the couple to sell bred heifers, 18-month-old bulls and a few bred cows at their annual November auction, an offshoot of their continually expanding summer-calving program.

"This gives us a bigger, more complete sale, which our customers like," she says.

The growth of the operation isn't likely to end here. Cullen-Goertz notes 12-year-old twins, Cole and Laynie, are already invested in the ranch and its future on this windswept prairie.

"They both love farming, and they both love ranching," she says. "In 2016, they each bought their first heifer and have since weaned their first calf that they can call their own. It's been an exciting journey for all of us." 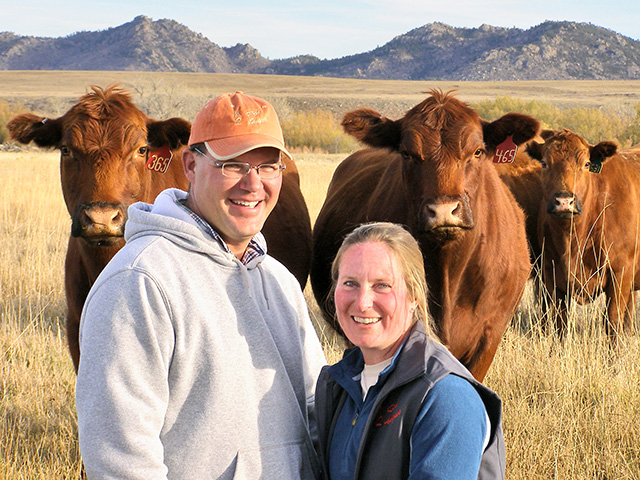