Whenever Scotty Lovett is complimented on the quality of his cattle, he usually says, "I inherited a good set of cows. All I've had to do is not mess them up."

That isn't the whole story. Despite what this Cuthbert, Georgia, producer says, he's had a major role in the development of the herd. He's helped with bull buying and heifer selection decisions for years, including two seasons before his dad, Bobby, passed away in 2012. Like most cattlemen, though, Lovett is always looking for the next step up. Given a chance to test drive Igenity profiles from Neogen GeneSeek for potential replacement heifers, he jumped at the opportunity.

Trait Snapshot. The tests would focus on a 450-cow, Angus-based commercial herd owned by Lovett, brother Bob, and nephew Graham. Step 1 of the process was DNA sampling on 59 heifers. Lovett and Ashby Green, regional representative for Neogen GeneSeek, took a small sample of ear tissue from those heifers the producers were considering keeping. They waited to take the samples when the heifers were already in the chute for their second set of postweaning vaccinations. The DNA samples were collected with an Allflex Tissue Sampling Unit (TSU), similar to an ear tag applicator.

"It was a simple procedure to do the ear punch. I don't think it slowed us down at all," Lovett remarks.

After they collected the small snip of ear tissue in the pre-identified tube, Green recorded each heifer's ear tag number to match with the TSU number. The samples were mailed to Neogen's lab, no ice required.

Analyzing EPDs, phenotypic data and genetic markers from thousands of cattle, Neogen and partners/researchers have come up with combinations of markers to predict the genetic merit of commercial animals for multiple traits. This allows producers such as Lovett to make well-informed decisions based not on visual appraisals but on those at the genetic level.

It took approximately five weeks for results to be e-mailed to Lovett and Green. Actual lab time is generally a month, but shipping delays in this case added a week. While this producer says he was looking forward to getting more information on his herd, he wasn't starting out empty-handed. This cattleman already had quite a bit of data on the herd.

For starters, Lovett knew herd fertility looked great. The last four years, they averaged 93% to 96% pregnancy rates, including on the heifers. In 2016, the producer only kept 29 replacement heifers, but all of them became pregnant.

"That's way above what we had," he says. "Maybe 10 years ago, we had preg rates in the mid-80s or less." He adds, "I don't know how much has been an improvement in genetics, and how much is body condition. It's probably a combination of the two."

That high preg rate is across a 90-day breeding season, with Lovett planning to drop the season back to 70 days.

"I don't think the preg rates will drop that much," he says of the shift. "Most of the calves are coming in the first part of the season." He adds he would have already cut back on the length of the breeding season, but when prices were higher, it made economic sense to get as many calves as he could. Now that prices have dropped some, he plans to take the bulls out earlier.

Weaning weights on the current herd are strong. Steers average around 650 pounds, heifers, 600 pounds. After a 60- to 90-day preconditioning period, they normally ship weighing 700 to 800 pounds.

He is ahead of the game on feedlot and carcass performance, too. Normally, Lovett sells steers and heifers he doesn't plan to keep in truckload lots in board sales. In 2016, he retained ownership on two loads of cattle, one steers, the other heifers. He was able to get feedlot and performance data back on a third load he sold after preconditioning.

That performance data showed him that the steers, fed out in two different states, had an average daily gain (ADG) of 3.5 pounds, the heifers, 3.25 pounds. On the rail, they knocked it out of the park, with 97% grading Choice or better, and 66% to 67% meeting Certified Angus Beef requirements of being in the upper two-thirds of that Choice grade.

Lots of positives, but on the minus side, Lovett says calves from the herd had the reputation of being flighty.

"I don't know where the disposition problem slipped in, but it did," he says. "We've been working on it. We're careful about the bulls we buy, and we've been culling females with bad attitudes. It has been a long, slow process, but we're gaining on it. Now, I don't think anybody could go with me when I feed in the mornings and say we have a disposition problem."

While Lovett experienced a few technical snafus downloading the Igenity genetic test results, once that was behind him, the reports were easy to interpret. The dashboard format Igenity results came in were essentially like an easy-to-read Excel spreadsheet—totally adaptable. The first thing Lovett and Green did was look at the scoring Igenity uses to sort heifers.

Based on a heifer's DNA profile, Igenity scores the genetic merit of her traits on a 1 to 10 scale. Producers can compare scores to other heifers in the Igenity database, which number in the hundreds of thousands.

The company creates a production index for each animal tested based on her overall scores. They weigh traits, giving a 10% emphasis to calving ease maternal, 30% to stayability, 15% to RFI, 15% to ADG, 10% to tenderness and 20% to marbling. But, that's just the starting point. If a producer wants to put more or less emphasis on a particular set of traits, he can create a custom production index with the dashboard.

It was almost all good news for Lovett Farms. Green likes to use a feature that puts data in the form of both bar graphs and bell-shaped curves. The data from the herd was below average in RFI, where a lower score is better. Across the other traits, almost all the heifers were above average. Lovett particularly liked being able to click on the bar graph to get an individual heifer's ear tag number, so he could see which animals excelled or came short on a particular trait.

"I'm excited about Scotty's graphs," Green says. "He has done a whale of a job selecting cattle. The index compares Scotty's cattle to all the other cattle in the database. It is skewed. It is the better cattle producers who are doing the testing."

After the report, Lovett says, "we're headed in the right direction. It appears the choices we've been making in our breeding stock are paying off, especially in marbling, rib eye and on the maternal side."

The one area where results were scattered was tenderness, a surprise to Lovett, since he buys bulls high in $B, the American Angus Association's index emphasizing postweaning performance and carcass values. University of Nebraska Extension beef genetics specialist Matt Spangler explains tenderness isn't actually included in the $B index. He says there is only a slight correlation between marbling, which is in the index, and tenderness. It's a common misconception.

He does have faith in the accuracy of DNA tests for commercial cattle that specifically predict tenderness, such as the one used by Igenity. He says researchers have been able to isolate specific genes that create tenderness.

With test results in hand, Green asks Lovett, "Now, what are you going to do with the data?"

Lovett looks at his printouts and says, "My first impression is to take this last page and cull them [on the production index], then take individual traits like tenderness and cull them if I have one below average."

Another option he's considering, based on the market, is keeping all 59 of the heifers he tested and selling those that don't fit his program as well as he'd like, as bred replacements. The genetic data he received from Igenity should give him a sales advantage, maybe even a premium.

Green says, "I can't answer that for you, but to me, the most beneficial aspect of this is to find and keep the best cattle to fit your resources. Send the rest down the road." He adds commercial producers who have been doing genomic testing on their herds for several years have been able to identify a $50-to-$150-a-head difference between the top and bottom third of the herd's females.

Lovett says he still has some studying to do, but he plans to repeat the test next year. "It is a learning curve, but after Dr. Green explained it, it answered my questions." He adds several years ago, he had tried another genomics test but felt results were harder to understand.

Next year, Lovett says he'll test all his heifers unless there is an obvious cull because of structure. "With a larger number of heifers sampled, I can be more selective on the ones I keep."

Green agrees with the strategy. "I think we need to do that in anybody's herd to get a genomic benchmark. Genomics testing allows us to calibrate our selection eye."

Nebraska's Spangler says if genetic testing is going to be used to select heifers, it only makes sense that every potential replacement should be considered. He adds total testing costs should be taken into account before producers make the leap to genomic testing.

"That means costs for the 20% retained should include costs for testing all heifers, not just the ... ones a producer keeps," he says.

To lower testing costs, Lovett says he will probably go with Igenity Silver next year. It doesn't cover as many individual traits, but it does include calving ease maternal, stayability, RFI, ADG, tenderness and marbling. He adds he will probably use Igenity Gold every few years to get another reading on more traits and see how he's doing in greater detail.

Overall, he felt the genomic test drive was well worth his time. "It is another valuable selection tool," he explains. "We've always paid attention to EPDs, but this appears to be a bigger piece of the puzzle. It is a way to see if the bulls I'm buying are paying." 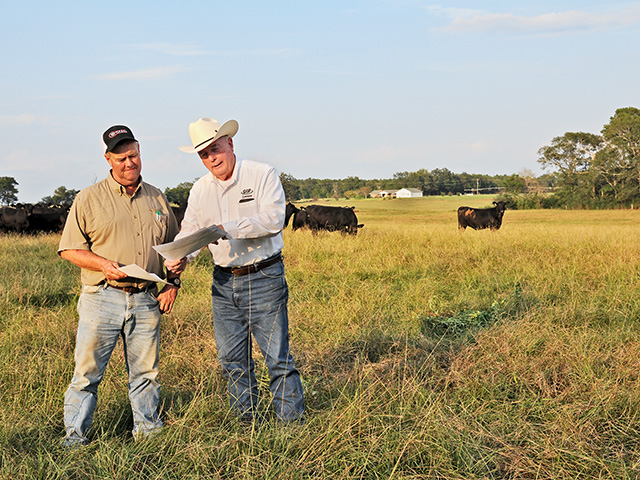