OMAHA (DTN) -- Mike Berdo spent most of his Thursday cleaning cattle pens and putting new bedding down to keep the cattle dry and warm. The Washington, Iowa, cattleman/farmer, who has both a cow/calf herd as well as feedlot cattle, keeps busy in the winter trying to keep his cattle as comfortable as possible during adverse weather conditions.

"We do all we can do to keep them dry and warm," Berdo told DTN. "When it's around 30 degrees (Fahrenheit) or warmer we only put bedding down once a week, but when it's colder we usually put it down twice a week."

The Midwest faced rain changing to snow this week, with the western areas seeing this on Thursday and more eastern areas on Friday, according to DTN Senior Ag Meteorologist Bryce Anderson. The primary feature, however, is the bitter cold along with strong winds.

Anderson said the cold wave will also be stressful for both feedlot and newborn calves in the Southern Plains.

"This combination will be stressful to livestock, especially in outdoor lots and in stalk fields," Anderson said.

DTN Livestock Analyst John Harrington said the bitter cold temperatures seen in recent weeks will surely make a difference over much of the cattle feeding country, especially in the northern tier.

The tonnage-robbing impact of snow and extreme wind chills is certainly taking a toll, both in terms of carcass weights and feed conversion, he said.

"But having said that, it's important to remember that cattle were born to live outside and tolerate average winter conditions," Harrington said.

Several weeks of extreme conditions alone may slow performance, Harrington said, but may not be market moving. On the other hand, if we are just getting the first test of a long and hard winter season, tough weather could easily become a major bullish force, he added.

PREPARE FOR THE WORST

Bill Armbrust, an Elkhorn, Nebraska, cattleman/farmer who operates Paradise Ridge Tarentaise, said Nebraska cattle producers prepare for the worst with Mother Nature but hope for the best. The basics include sheltering cattle from the weather, plenty of feed, and heated water sources; they are to be expected each winter, even when wind chills are minus 30 F, he said.

As a seed-stock producer, he has to deal with extreme weather just as his customers do. His cows are fed through the snow on corn stalks and they need to thrive in extreme weather, both severe cold and high heat.

"Just as I feed similar to how a commercial herd would feed, I need to select genetics on the ability of the cow to continue to do well under less-than-ideal conditions," Armbrust told DTN.

Calving in the middle of winter is not the norm in the commercial business but is in the seed-stock business. This requires more management of newborn calves just to survive, he said.

If calves are born during wet or severe cold conditions, Armbrust has inside pens ready and calf warmers prepared. Once the calf is dry and warm, he uses open front sheds restricted by creep gates for the calves while cows have access to windbreaks and corn stalk packs.

If the sun is shining and the conditions are calm, the cows and calves are permitted open calving space on corn stalks near the farm place, he added.

"Cows are ruminants built to deal with these conditions," he said.

Berdo said another aspect of his cold weather plan is to make sure his cattle have access to increased amounts of feed.

His cow/calf herd has access to corn stalks and they use lower spots in their Washington County fields to get out of the wind. His replacement calves will calve in February while the rest of the herd will calve beginning in March.

For his feedlot cattle, he watches the bunks closely to ensure he is feeding enough to keep the animals gaining weight. In colder conditions, cattle will need more feed for the extra energy to keep warm and keep eating, he said.

Berdo's brother, Dan, operates in a wean-to-finish confinement hog operation and the family operates a feed mill for both these livestock operations.

The feed mill faces its issues during times of extreme cold. Machinery operates differently in the extreme cold, leading to more monitoring as well as more maintenance and repairs, Berdo said.

The feed itself can also be affected by the cold weather. Animal fat, which is a liquid, is added to hog feed and if it gets cold the fat gels together "like Crisco," he said.

The fat is stored in an insulated tank and they use propane heaters to keep the fat warm so it flows smoothly. If the heaters were to break down, they would have issues mixing hog feed correctly, Berdo said.

For Midwestern livestock producers, some good news might be on the way.

Anderson said the forecast does offer some relief as a rapid moderation of conditions is expected during the week of Jan 15 to 19.

Temperatures trend from much below normal to much above normal in the Northern and western Plains and near normal in the western Midwest by Jan. 18, he said.

This will be followed by above- to much-above-normal temperatures during the Jan. 19 weekend. 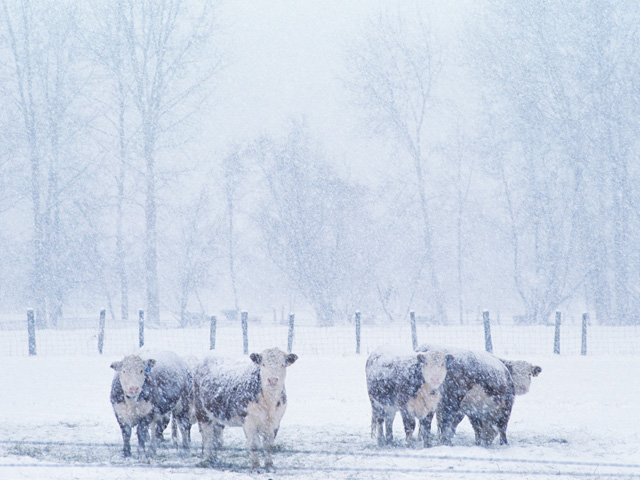