CHICAGO (DTN) -- The United States is in the middle of now 104 months of economic recovery, much longer than the average length of 60 months. And without an obvious shock to the system, the U.S. economy could remain in growth mode for the next couple of years.

While the agricultural economy in the U.S. is showing slow recovery, according to USDA income figures, Behravesh highlighted the rising growth of the U.S. and global economy, as well as the possible risks to that growth moving forward.

The U.S. is in the midst of the third-longest economic recover since the 1850s, Behravesh noted. The global economy also now is seeing its strongest economic growth since 2011 -- driven not by emerging markets, but more by the U.S., Europe and Japan.

Overall, U.S. economic growth averaged 3.1% in the second quarter of the year, and 3.3% in the third-quarter of 2017 -- well above trends. The fourth-quarter growth is projected at 2.7%, he said. Even before tax cuts are factored in, Behravesh said, the U.S. was still expected to see overall economic growth in the 2% to 2.5% range. While the Trump administration wants sustained growth of 3% annually, Behravesh said mature economies don't generally sustain such growth targets.

"We're in very solid ground as far as the U.S. is concerned," he said. "I don't think even with a tax cut we can sustain 3% growth. That's very, very unlikely."

Still, consumer confidence is at 17-year highs as income growth is good, jobs growth is good and household net worth has improved through higher stock value and home values. "So there are a lot of fundamentals for the consumer that are improving," he said.

Capital spending by businesses had been lackluster until recently, but businesses also feel the Trump administration is more business-friendly than the Obama administration, mainly with cuts in regulations and the push for lower taxes.

"Businesses feel this," he said. "They feel they have got a friend in Washington ... So they are beginning to spend on capital of all kinds, and this has become a bit of engine growth."

Long-term trend growth in the U.S. generally averages between 2% and 2.25%, he said. "We can't go above that for too long without triggering inflation, which would mean higher interest rates, etcetera, etcetera," he said.

Behravesh credited better monetary policies as being "very growth-supporting" even though the Federal Reserve in the U.S. is tightening a little bit and expected to raise interest rates again this month, as well as possibly three times in the coming year. Despite those rate hikes, Behravesh said, the Fed will not get in the way of current economic growth.

Looking more at the tax legislation, Behravesh said traditional tax reform lowers rates, broadens the tax base and simplifies. The current tax legislation in Congress lowers rates, but does not simplify taxes for businesses. In fact, a lot of provisions in the House and Senate bills complicate taxes further for businesses. The tax base was not broadened much because Congress so far has not gotten rid of a lot of loopholes for tax avoidance.

The long-term concern is the tax bills will raise the federal budget deficit by as much as $1.5 trillion over the next decade. The danger of the tax cut is ignoring the budget deficits could become inflationary. That would trigger a much sharper reaction by the Federal Reserve to raise interest rates down the line.

"So I'm glad they are lowering corporate tax rates. We need those cuts, but the way they are doing it raises my concern levels substantially," he said.

Looking at other debt, Behravesh said the Chinese economy is always a perennial question. Growth over the past year has been about 7%, but the rate of growth in the country continues to gradually slow. Short term, China should see continued growth because the government has been pumping up the economy. Long term, however, China has a rapidly aging population because of the one-child policy that will restrain growth. "Ten years from now, China will be lucky to have 5% growth just because of demography," Behravesh said.

Medium term, China's economy could end up choking on its own national debt. The country's debt-to-gross-domestic-product ratio over the past decade has gone from 120% to 260% -- higher than that of the U.S. That debt poses a major risk for the Chinese economy. "No country has ever gone through that kind of debt explosion without something bad happening," Behravesh said.

Often, such debt leads to an economic meltdown, much like the U.S. faced in 2008-09, though another scenario is China could face the same kind of long-term struggles that Japan faced in the 1990s because of its debt, which Behravesh described as a "lost decade scenario" in which growth only averaged about 1% annually.

Other economies seeing strong, sustained growth right now are in the Asian countries of India, Indonesia, Vietnam and Malaysia. "Asia is still by far the largest growth region in the world," he said.

Going back to the length of the U.S. economic cycle, Behravesh said, "Recoveries in the U.S. do not die of old age, they get killed off."

An asset bubble hit the economy in 2008. There are debates among economists about possible current market bubbles, but Behravesh said he doesn't see any obvious signs in the market right now.

What keeps Behravesh up at night are the potential policy mistakes, such as a government shutdown or failure to raise the debt ceiling. Another risk is a trade war. He acknowledged President Donald Trump has a blustery style of negotiation that comes on strong then seeks to reach a deal. Still, a lot of posturing in trade talks is going to rattle the markets, he said.

There are significant risks if the U.S. walked away from the North American Free Trade Agreement or got into a trade war with China, Behravesh said.

"I don't know why this administration doesn't grasp the severity of this problem," he said. 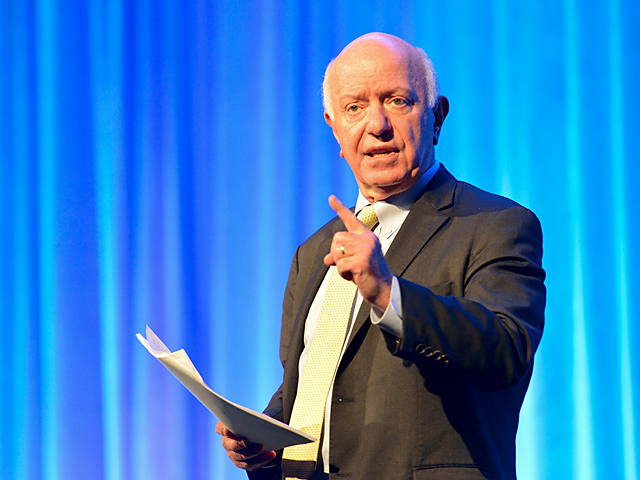