OMAHA (DTN) -- USDA officially filled another key leadership position Monday as Greg Ibach was sworn in as USDA undersecretary for marketing and regulatory programs. At the same time, Agriculture Secretary Sonny Perdue lamented the Senate confirmation process that is tying up another key undersecretary nominee.

Ibach, who was director of the Nebraska Department of Agriculture for the past 12 years, was sworn in at the old Livestock Exchange Building in Omaha that was part of the Union Stockyards Co., the country's largest stockyard from 1955 to 1971. The facility shut down in 1999 and has been repurposed into a commercial building for events and apartments.

Ibach, in explaining his work at USDA, said he would bring balance to the regulatory responsibilities to the producer, as well as look for ways to advance agriculture.

"That's what I hope to be able to continue to do is balance responsibilities with a framework that consumers can trust agriculture and trust their food supply, not only here in the United States, but as they look to us as a supplier worldwide," Ibach said. "I want to communicate that trust while we are looking for new opportunities."

Perdue pointed out in his brief speech that Bill Northey, Iowa's agriculture secretary, was in attendance but would not be sworn in. Northey is a USDA nominee for undersecretary for farm production and conservation and had gone through most of the confirmation process with Ibach. Sen. Ted Cruz, R-Texas, however, put a hold on Northey's confirmation vote in a dispute with other senators over the Renewable Fuel Standard.

"It's a sad note when one senator -- and I respect the process -- but when one senator can put a hold on a nominee not based on anything to do with that nominee, but another total issue, I'm not sure we got the right process in place," Perdue said. "I respect that process. We're going to work on getting that cured so we can get Bill to working for us as well."

Perdue talked about his team finally coming together, saying the Trump administration was putting together a "world-class World Series team" for USDA. He noted that, earlier this month, Steve Censky was sworn in as deputy secretary and Ted McKinney as undersecretary of Trade. The U.S. Senate confirmed Ibach last week. Still, Perdue told reporters he was frustrated about the pace of Senate confirmations for leadership positions.

"It's the end of October, folks. We need some people to go to work," Perdue said.

Perdue blamed Senate Democrats for slowing down the confirmation process, though Cruz is a Republican who put the hold on Northey.

Gov. Pete Ricketts noted Ibach helped implement a "livestock friendly" initiative in the state that 43 counties joined as a way to promote livestock production in those counties. He also helped brand a "Nebraska Beef" program to tout the state's industry.

"That's important for value-added agriculture, one of the ways we're going to grow our economy," Ricketts said, adding Ibach understands how to boost markets for agriculture.

Chris Clayton could be reached at Chris.Clayton@dtn.com 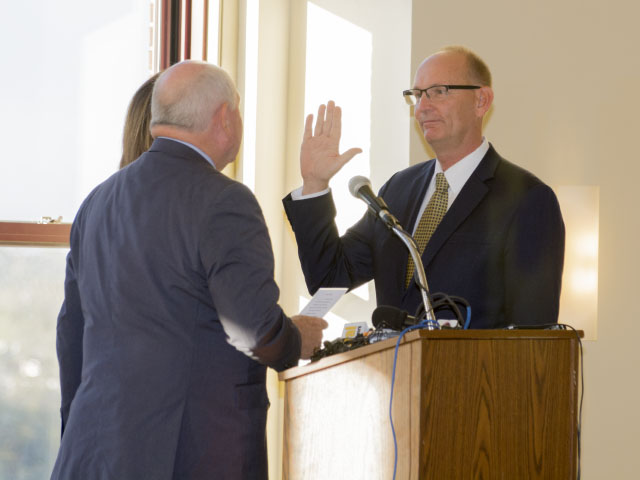