Dixon Shealy would love to have a do-over of late-summer and fall 2016, one with rain. Drought brought the growth on his bermudagrass pastures to a screeching halt that year. He was feeding hay on the family's Newberry, South Carolina, farm by early November.

It was a marked contrast to 2015. That year, the cattleman was able to stockpile 60 acres of bermudagrass, which he used to graze cattle until January. When he tallied it all up, he had only fed hay 80 days, thanks in large part to the stockpiled grass.

When stockpiling goes as planned, Shealy said it normally extends the grazing season for dry cows at Black Grove Angus farm by about a month.

Mississippi State University (MSU) Extension forage specialist Rocky Lemus agrees stockpiling bermudagrass is typically a sound strategy. "In the South, there are economic benefits to extending the grazing season, especially in the fall when warm-season perennials go dormant, and winter annuals aren't growing yet," he noted.

Shealy said those economic benefits are particularly evident in his family's 175-cow herd, since they rely on purchased hay.

Auburn University (AU) Extension beef specialist Kim Mullenix also believes economics come out on the side of stockpiling. At AU's Wiregrass Research and Experiment Station, in Headland, Alabama, workers grazed two fall-calving Angus-Simmental pairs per acre on stockpiled Tifton 85 bermudagrass in the falls of 2012 and 2013. In 2012, they were able to graze cows on the standing forage for 116 days; in 2013, for 83 days.

The average cost of wintering a cow/calf pair on the stockpiled forage was $174.18 an acre, compared to $506.53 a pair in the control group wintered on hay plus 6 pounds of whole cottonseed a day.

While the cost savings can be substantial, stockpiled forage, often referred to as standing hay, is a bit like the baled alternative. It takes conscientious management.

Mullenix recommends using a high-quality hybrid like Tifton 85 bermudagrass. "Tifton 85 has been shown to have a higher yield potential and good nutritional value. It is slightly more digestible than older, less-improved varieties."

She isn't a fan of stockpiling bahiagrass, since it doesn't hold its quality and is not as high yielding as hybrid bermudas.

Lemus, however, said, "If you stockpile both bermudagrass and bahiagrass, use the bermudagrass first, as it tends to lose its leaves quickly."

Shealy used Cheyenne bermudagrass, an improved seeded variety. He said it doesn't have quite the quality of Tifton 85 but holds up to stockpiling better than common bermudagrass.

To estimate when to start the stockpiling process, Texas A&M University Extension forage specialist Vanessa Corriher-Olson recommends producers start allowing it to grow eight weeks before the expected first frost date in their area. In east Texas, she said that generally means a start date of late August or early September, in anticipation of a mid-November frost.

Before letting forage accumulate, Lemus recommends cattle graze it down close to the ground, or producers harvest the area for hay. Follow either with 40 to 50 units of nitrogen (N) per acre.

This is a case where more is not necessarily better. In the Wiregrass trial, researchers experimented with three N rates on a per-acre basis—50 pounds, 100 pounds or 150 pounds. The higher N rates didn't increase the amount of forage, (average 4,700 pounds of dry matter an acre), digestibility or protein level.

Shealy allowed cows to strip-graze at a stocking density of 25,000 to 50,000 pounds of cows per acre to prepare for stockpiling. He doesn't always fertilize, relying on the manure and urine from the cattle to add nutrients to the ground.

Bring Some Patience. Growth on bermudagrass is slow in October, but you can probably graze it in 45 to 60 days, MSU's Lemus said.

In South Carolina, Shealy will graze the stockpiled area on an as-needed basis. If his common bermuda and fescue pastures are still growing, he continues to graze them. However, in 2016, with no growth because of the drought, he turned to the stockpiled forage by late October. Years past that start date varied from mid-November to mid-December.

Shealy strip-grazes and said, "We leave them on 48 hours at the most before we move them to a fresh strip. It works much better to move them daily."

He uses a much higher stocking density with stockpiled forage than he does when preparing it for stockpiling, averaging around 75,000 pounds of cattle per acre.

"The grass is less palatable, and we want them to eat anything that is edible. Stocking density is the key," he explained.

It's hard to make an accurate decision on supplements for the herd if you don't know the quality of the forage.

"It is a good idea to take forage samples and have the forage tested," Lemus said. "Protein and energy levels vary. If you know what they are, you can adjust the supplement levels to meet the needs of the cows."

He typically sees crude protein (CP) levels at 11 to 12% in stockpiled bermudagrass, and total digestible nutrient (TDN) levels around 40 to 48%. CP needs for moderate-framed dry cows are around 6%, while TDN needs are 45%. However, that same 1,000-pound cow, two months after calving, needs a minimum of 9% CP and 57% TDN.

At AU, quality of the stockpiled Tifton 85 bermudagrass averaged 60% TDN and 12% CP in 2016, adequate for the fall-calving cows. Mullenix said cows stayed at an ideal Body Condition Score (BSC) of 5.0 to 6.0, although both the groups on the stockpiled forage and the control groups lost weight.

"That is expected for lactating cows," she noted. Milk production in all groups averaged 20 pounds per cow per day; the rebreeding rate was 88% for all groups. Calves in all groups fared well, too, with weaning weights ranging from 550 to 620 pounds.

In research done in Overton, Texas, in 2004, Corriher-Olson said CP on bermudagrass was 14.8% when tested in October. However, she noted, "It dropped to 11% by December with the wet conditions we normally get in the winter."

While making use of stockpiled bermudagrass does require extra time and attention, Shealy insists it's a valuable investment. It takes him around 20 minutes a day to move the temporary electric fence to strip-graze, less time than it would take to put out rolls of hay. When he takes the $2,100 he saves by not buying hay and divides it by the 20 minutes he uses to move the fence, he said, "That comes out to about $50 an hour." 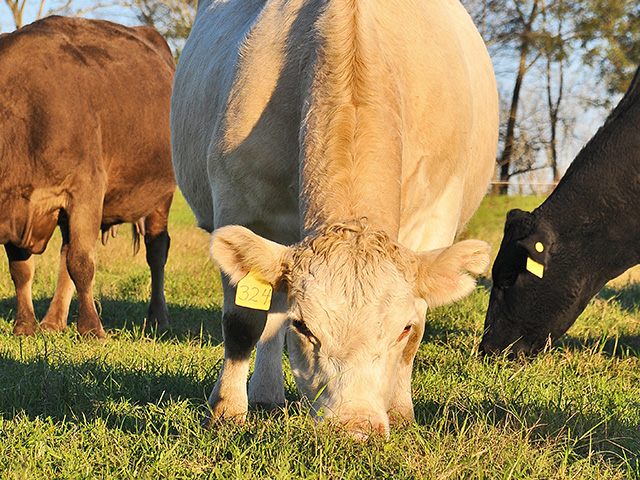