Gene Kubecka was living through a disaster, but the day he found his cows will always be remembered as a good day.

Based in Bay City, Texas, Kubecka's ranch is just 80 miles from Houston. Early on, he had found and moved 200 of his 600-head cow herd, all belly-deep in water at the time, using a tractor. Later, a tour with an airboat turned up the last 120 head. Good pasture was under water, and a creek that at its highest got 4 to 5 feet deep was 20 feet or more deep.

"They had found some high ground, and looked fairly good," he said, adding livestock losses will be zero now. "After seeing them, we felt much better. We're made of pretty stern stuff, but we are feeling better than we did. People are worse off than the cattle right now."

Other ranchers, like Kubecka, may know the fate of their cattle, but they don't know the fate of pastures. Kubecka had put up 700 round hay bales, and had enough feed for winter, but could not access those supplies at the time this article was written.

"Our biggest concern is what to do about our pastures," Kubecka told The Progressive Farmer's Dan Miller. "If that grass is under water for four or five days, will it be worth anything?"

To put the scope of ranchers affected by Hurricane Harvey and its aftermath into perspective, Texas A&M's David Anderson, Extension economist at College Station, said there are more than 1.25 million beef cows in the affected areas. This is across the 54 counties in Texas, now declared disaster areas.

"That's 27% of the state's cowherd," he said, noting this is a conservative estimate. He added that, given the time of year, a lot of calves in the affected areas were close to marketing.

Andy Vestal, an Extension specialist at A&M working in the area of emergency management, said as of Aug. 31, rivers had still not crested and there was severe damage to infrastructure. That included fencing and feed delivery systems for livestock. One positive note he shared was the flood waters were almost all fresh water, not salt water. Fresh water would mean less long-term damage to pastures than salt water, which can harm plant roots and lead to plant death. Salt water can also damage soil structure.

Vestal was optimistic that even pastures under water for several days would be able to be restored with good management. Rancher Kubecka noted he had a mix of native and pasture grasses, as well as a good cover of clover, all now under water.

Efforts to get hay and protein to cattle are ongoing, and Vestal said deliveries were being made as conditions allowed. He noted range cubes sourced from the Texas Panhandle were ready to be delivered, and reports of help coming into the affected areas were "incredible." He added the means for moving feed and supplies into areas needing them included helicopter, boats, high-clearance trucks and military vehicles. Receiving areas were set up for any cattle that needed to be moved to higher ground.

Thomas Hairgrove, Extension specialist with Texas A&M and a veterinarian, spoke to The Progressive Farmer from emergency meetings at the Texas Animal Health Commission (TAHC). He said there is still much we don't know as far as livestock losses and long-term impacts.

"We know we've got dead animals, but we don't know how many," he said. "Rivers are still coming up. This is a shifting deal."

Hairgrove said one producer believed he had lost a large number of cattle, but found them. That is not an unusual story throughout this tragedy. Cattle have broken fences and moved out of flooded areas to higher ground wherever they could. Ranchers who thought their herd was gone, like Kubecka, are finding them alive.

Possible long-term health implications for cattle in flooded areas are hard to predict, said Hairgrove. Obviously, they are stressed, but he noted no one knows yet what toxins they've been exposed to in the water. There may also be issues with feet and leg problems, or lameness, for cattle that stood in water for long periods of time. Rumen health is also a concern.

The TAHC has been coordinating the disaster response for issues related to animals -- including livestock, pets and zoo animals. The commission reported on Thursday, Aug. 30, there were 74 shelters available to receive animals, and those numbers were growing. Information and location of those holding facilities can be found at: http://www.tahc.texas.gov/…

Andy Vestal said it's important livestock producers know there is a Livestock Indemnity Program managed by USDA's Farm Service Agency that can provide benefits for any animals lost. Payments are equal to 75% of the average fair market value of the livestock, he said.

Harvey Hotline: Anyone looking to volunteer, donate or offer shelter for animals can call 512-719-0799 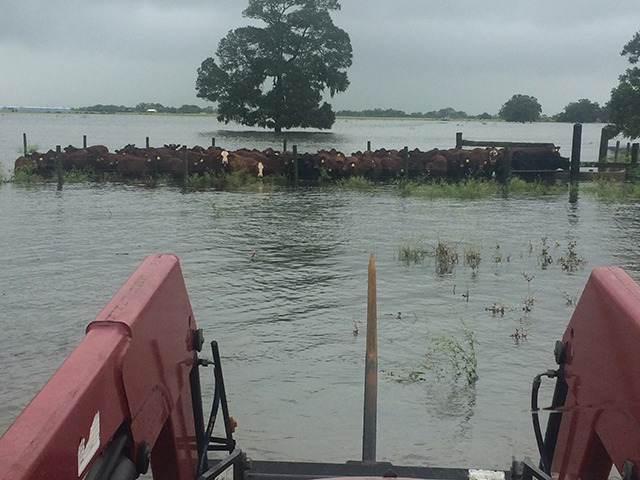