Shellman, Georgia, is like a lot of small, rural communities. Shuttered stores and crumbling buildings are all too common. Even with its beautifully restored antebellum homes and popular The Back Porch restaurant, this downtown is badly in need of a face-lift.

Enter Chris Johnson. When he set out to register at Clemson University in August 2005, he intended to sign up as a biology major. That line was on the left. The line for art majors was on the right. "I got in the right-hand lane," he says.

The folks in Shellman are mighty glad he did. His murals already cover two 35,000-bushel grain bins right in the middle of downtown, and plans are in the works for murals on four more.

"I love it," longtime resident and mayor Paul Langford says. "We want to get lights so people can see them at night."

Johnson, 35, inadvertently started building his resume for grain bin art while he was still in high school. In addition to taking all the art classes offered, he served as FFA secretary for two Georgia county high schools (Worth and Crawford counties) despite not having an ag background. "All the cool kids were in FFA," he recalls. After graduating from Clemson and getting his master's of fine arts degree from the University of South Carolina, Johnson came to Andrew College, in Cuthbert, Georgia, in 2013 as head of the art department and lone art teacher. When he saw Cuthbert, county seat of Randolph County, one of his first thoughts was, "Where are the murals?"

Fortunately, Randolph County dynamo and president of the Chamber of Commerce Patricia Goodman had the same thought. She led a grant-writing project that resulted in Johnson painting a mural depicting 1920's Cuthbert on the side of one of the town's historic brick buildings.

When the Georgia Department of Economic Development Tourism Product Development Team came to Randolph County as a prerequisite for the original funding process, it spotted the grain bins in Shellman and immediately tagged them as mural candidates. With money from the Economic Development group and the city of Shellman, Johnson got the go-ahead.

A self-described history fanatic and fan of agriculture, Johnson dove into the design phase. He pencilled his ideas on 24-inch-square pieces of paper, transferred them to Photoshop and used grids the same proportion as the 32-inch x 36-inch panels on the grain bins. He painted the outline on the bins using cans of white primer. Next, he says, "I draw using grey primer. White paint is my eraser."

Painting on a corrugated grain bin is not the same as painting on canvas. "I'm used to blending," Johnson says. "Here, I have to find a different way of working. Up close, the mule's face looks like puzzle pieces."

However, he says, the biggest challenge when it comes to painting grain bins is actually the bolts holding the bin panels in place. "There are millions of them. I have to go around them and squish paint into them."

There are also two challenges farmers can readily relate to. It takes the high-quality exterior latex paint around 20 minutes to dry completely. A sudden summer shower can wreak havoc on the ongoing work. Johnson has become fast friends with his phone's weather app.

Then, there is the hydraulic lift, the use of which was generously donated by Shellman-based Quality Gin. It has come with its own set of trials.

"The hydraulic gear busted and spewed greasy hydraulic fluid all over the mural," Johnson says. Besides taking seven days to get it repaired, the stain can still be seen.

Add some stifling summer heat and the infamous gnats of Southwest Georgia, and you'd think the artist might be due combat pay. But, Johnson is thrilled with how the project is going and looking forward to more.

"It's fun. It was so cool working on the mule mural while they were pulling wheat out of the bin. It is getting a lot of exposure in the area, and I'm all for putting this place on the map." 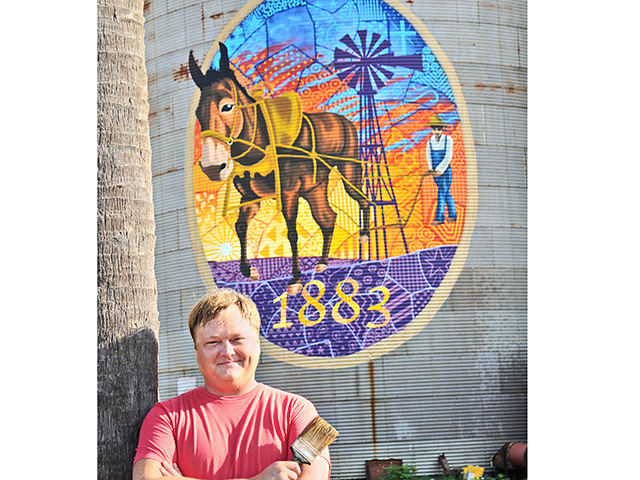