On February 19, the temperature was down in the low 20s in Marianna, Fla. Hardly typical. But Lamont Ennis wasn't complaining. "Isn't it a beautiful day? This will knock the flies back."

It's no wonder Ennis welcomes cold weather. This general manager of the Southern Cattle Company, says he and his crew fight flies at least six months out of the year. They appreciate any help Mother Nature throws their way.

"Fly control is a challenge in the Southeast because of our warmer weather. We don't get enough prolonged periods of cold weather to impact insect populations. Then we have a long, hot, humid summer season," he says.

The battle against flies starts mid-March, which is weaning time at the ranch. Because fly populations can be unusually high here and the season long, Ennis' control program may not always toe the line recommended by some entomologists to avoid the development of resistance. He does make sure, however, that his approach to control is multipronged.

Ennis says they try to keep ahead of flies, making sure controls are part of their scheduled program. As calves are vaccinated, around the 8-month-old mark, they are dewormed, and the keepers are treated with a fly pour-on. He uses either Ultra Saber (lambda-cyhalothrin), which targets horn flies, or Durasect (permethrin) for lice and face fly control.

The weaning process, and the use of the pour-on applications for fly control, continues until mid-June for the fall calving operation. It takes that long to wean calves from a 4,500- to 5,000-head cow herd, spread over some 15,000 acres.

FeedThrough Controls. Along with the pour-on applications, minerals with feedthrough fly control containing methoprene are made available to the herd in mid-March. Ennis continues to use these minerals until the end of fly season, typically sometime in mid-October.

While Ennis says his program works well and credits the feedthroughs with a large share of his control success, producers need to know the limitations of feedthrough products.

Dave Boxler, entomologist at the West Central Research and Extension Center, North Platte, Neb., says feedthrough fly-control products work well when it comes to killing fly larvae in manure, but the products will not kill adult flies. In addition, there is always the migration of flies in from adjacent pastures to consider if this is a chosen method of control.

In Ennis' situation, the pour-ons usually give control for 45 days, and the mineral is an additional method. When fly populations really ramp up in August and September, Ennis says they use the pour-on again or spray cattle with a permethrin or cyfluthrin insecticide from a hand-held unit out of the back of a truck after baiting cows into corrals.

Boxler uses a similar approach with a sprayer but does it out on pasture.

"I did a study five years ago with a mist blower on a pickup, and I was able to reduce stable flies 72%," he reports. "I fed the cattle range cake, and over time, they calmed down. Some of our producers in the Sand Hills have adapted the system, and it works pretty well for their management styles."

Boxler particularly likes the approach since it keeps from stressing the animals by penning them in during the heat of the summer. Plus, he says it is hard to get spray on the legs of cattle for stable fly control when they are crowded in a corral.

Less Manure, Fewer Flies. Back in Florida, Ennis says sanitation is another key component of their fly-control program.

"We start fresh in the spring and clean up around bunks and hay rings. We try not to have any spoiled feed around and scrape the manure and hay away from the rings."

For places where manure and hay tend to pile up, such as around hay rings, he likes to use a larvicide. "Neporex sprinkled over the site does a really nice job of killing larvae," he says. (Neporex 2SG is a water-soluble granular with the active ingredient cyromazine, which can be scattered or sprayed.)

Ear-Tag Option. One method Ennis doesn't use is fly-control ear tags. Although he says he has seen them work well other places, the length of their fly season and the number of cows they run make the tool impractical for their operation.

Boxler says they can work well in his state. "We have an abamectin ear tag, XP 820, that is very effective."

However, the entomologist cautions timing is key for these tags, with the active ingredient avermectin.

"Here, I recommend waiting on fly tags until the last week in May or the first of June to apply them to adult animals. If you apply them in early May ... you won't have the control when you need it later."

He adds it's a good idea to double-tag the cows, then you won't have to apply them to calves. Studies in Nebraska show an additional 10 to 20 pounds of weaning weight for calves whose dams have double ear tags.

Other tools Boxler recommends for horn and face flies are forced-use dust bags or back rubbers. These have to be well-placed in areas that cattle have to go through to reach a water trough, for example. If they are done free choice, he says 25 to 50% of the control can be lost.

The key to good fly control, Ennis believes, is not relying on any one thing to do the job. He says he'll stick to his one-two-three punch of pour-ons, minerals containing feedthrough products and sanitation.

"If you just attack it from one angle, you'll be limited in fly control. But if you'll do all three, regardless of the size of your herd, you'll be

When summer tour groups visit Midwest Feeders, one of the first things they notice is what isn't there.

"People tell us, you've got 3,000 head of cattle but no flies," Michael Martz says. The secret is parasitic wasps that munch on fly larvae.

"This is the sixth year we've used them," says Martz, a partner in Midwest Feeders/Larson Farms. "Before, we were spraying but not on a regular basis. We had a ton of flies. The first year with the parasites, it was a night and day difference. They work a whole lot better."

The Maple Park, Ill., cattleman first saw the parasitic wasps at a National Cattlemen's Beef Association convention. Now, he gets weekly shipments each year between April 15 and October 15.

"You have to work at it," he adds. "We have one person whose job is to put out the parasites on a timely basis.

"It is essential to put the wasps where the fly larvae are," he continues. The covered barns at the feedlot are over deep pits. Manure and urine fall through concrete slats into the pits, where the waste is stored until they pump it out and apply it to crop fields. Martz says, "We throw the bait down in the pits and put them at the edge of the barns."

USDA-ARS entomologist Jerry Hogsette has worked with parasitic wasps but says it is hard to document their effectiveness since flies can travel from neighboring operations. The Gainesville, Fla.-based researcher says, "You can't depend on any one thing for fly control, but parasitic wasps can be part of a pesticide-free program that includes sanitation."

He does not recommend them for pastured cattle, though. "There is just too much area to cover," he says.

"We are totally pleased with them," Martz says.

The weekly shipment of wasps, sized to fit the 3,000-head-capacity feedlot, costs $110 and comes from Kunafin, a Texas-based company. For more information, visit www.kunafin.com. 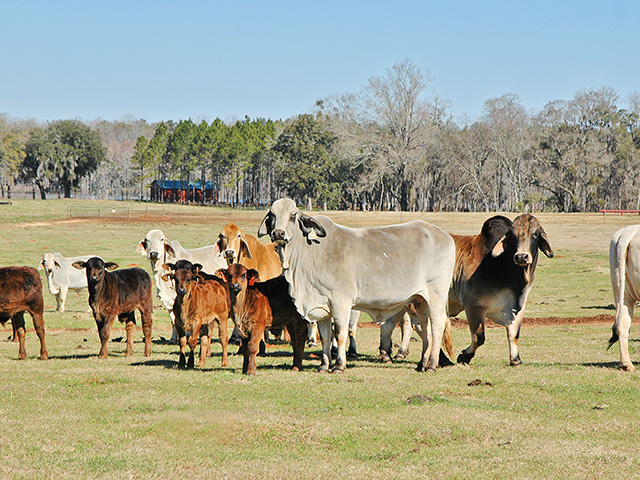