The Heward family has always lived in drought. In good years, the Wyoming ranch receives 9 inches of precipitation. In very bad years, it's lucky to get 4 or 5 inches.

With that kind of history, it's easy to understand why the operation never had any kind of drought-management plan. Heward Ranch manages to run 300 cows and 600 sheep in the incredibly desolate, dry, wind-swept Shirley Basin, elevation 7,200 feet. And it's done so for five, going on six, generations.

It took some serious wrecks to convince Todd Heward things needed to change if the ranch was going to survive. So 10 years ago, he began to seriously plan for those inevitable wrecks. His goal wasn't to boost the number of cows and sheep his family could run, but rather to improve the health of soil and forages—the very foundation of the ranch. It's a mind-set that has allowed the Hewards to get through several dry periods over the last decade relatively unscathed.

"Our plan is focused on building security so we don't have to destock in moderate drought situations," Heward explains. "Our biggest tool is banking feed."

Heward says they rest about 15% to 20% of their land each year. And of the pastures they do graze, they make a strong effort to stick with the old saying, "Take 50, leave 50."

"If you are taking care of the range, it has a lot more resiliency going into drought and coming out of drought," the rancher notes.

More than 16,000 acres, Heward Ranch had only two pastures a decade ago. Now, there are 29. This allows the family to rest three to six pastures each year, while the others are only grazed between five and 25 days instead of all season long.

They also have a permit to run livestock on 15,000 acres of federal Bureau of Land Management (BLM) lands, common across the West. They recently signed a long-term contract to graze 5,600 acres of nearby private land.

To better distribute cattle, they developed three springs and five wells, and have constructed 17 miles of pipeline (most of this work has taken place on their deeded lands).

Heward, who plans out grazing three years in advance, uses the Grazing Response Index to help determine if his plan is working and if adjustments are needed.

"A lot of our pastures score 3s, but we do get a lot of 4s (the top score). We believe those 4s are our bank, and the bank has absolutely helped us during droughts," Heward says. He points out that during several recent droughts, about 75% of the forage utilized by cattle and sheep was the previous year's growth.

To build such a bank, he emphasizes, "You gotta stick to your guns. You just can't throw the gates open and let the cattle have at it."

In what initially seems counterintuitive when it comes to drought planning, the Hewards lease 10,800 of their 36,600 total acres to other area ranchers under short-term contracts—typically three years.

"If we're moving into drought, the lessees understand there is a chance they'll have to remove their cattle," Heward says. He realizes this isn't ideal for the lessees, but it's another important way to build their forage bank.

"We try to determine by late winter or very early spring if we'll need any of those lands, but it's been very rare that we've had to tell someone they couldn't graze," he adds.

This tool helps Heward keep labor costs to a minimum. He and his wife, Malea, along with their children are typically able to run the cattle and sheep and put up 250 acres of hay by themselves.

When pregnancy-checking in the fall, Heward says they identify about 20% of the cow herd for any deficiencies—maybe she is a little thin, or she needed assistance during calving, or she raised a small calf.

"If we know we're moving into a drought the following spring, those are the cows that we immediately let go," he points out.

Another move that has paid off is carrying more than 100 to 150 calves each year.

"If we get into a drought situation, we can easily ship them the following spring," says Heward, adding that in good-moisture years, the yearlings bolster marketing opportunities.

Heward is a firm believer in closely monitoring weather and making decisions based on a written plan, which is centered, in part, on what Mother Nature says.

"Since we can get some key moisture in late April and early May, we'll make our critical decisions by May 15, unless it's so bad it's obvious," Heward says. "The weather station helps immensely in that decision-making.

I just wish we had four more stations on our ranch."

Editor's Note: This is the second of two stories looking at how cattle producers plan and manage around drought. Look for the previous report in March's Cattlelink section. 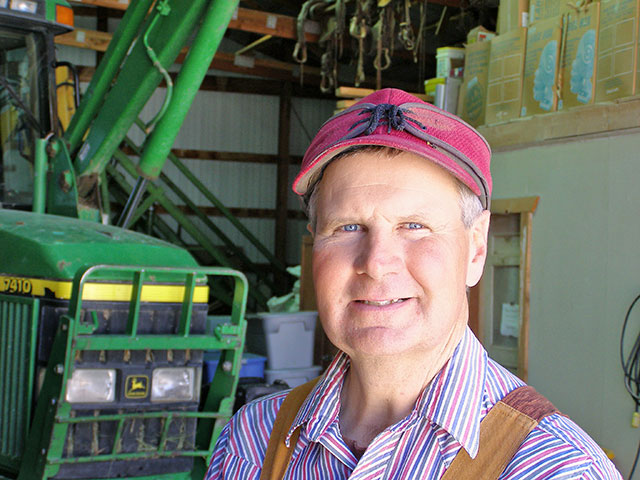