SAN ANTONIO (DTN) -- As they lament the loss of the Trans-Pacific Partnership, leaders of major commodity organizations are demanding Congress increase funding for two relatively obscure trade programs in the farm bill.

The programs' acronyms are MAP and FMD -- or the Market Access Program and Foreign Market Development Program. The MAP program is budgeted at $200 million annually and FMD is budgeted at $34.5 million. The two programs combined, help leverage dollars to sell various farm products overseas. Yet, they've also been the subject of repeated budget cuts in Congress that have limited the effectiveness of the programs. Leaders from farm groups argue they would rather increase funding for programs that help boost trade and markets for products than see farmers rely more heavily on the farm-program safety net due to sustained lower commodity prices.

Washington state farmer Brett Blankenship, past president of the National Association of Wheat Growers, stressed the importance of trade programs in his region, where roughly 90% of wheat produced is exported.

"For some of us, trade is vital to our growth and survival," Blankenship said.

The National Association of Corn Growers passed a resolution supporting a funding increase for MAP and FMD. The wheat growers and the American Soybean Association want to see funding doubled to roughly $469 million, as a way to help spur more exports. Blankenship noted such funding is needed because the U.S. is at a trade disadvantage without the Trans-Pacific Partnership. The U.S. only has 17 bilateral trade deals out of roughly 250 such deals globally.

"We think in lieu of not having trade deals, we need to supplement in other ways to enhance those export efforts," Blankenship said.

He noted that Congress has repeatedly cut the two programs in the past as conservatives see MAP and FMD as a form of corporate welfare. Yet spending on the two trade programs to boost trade is a lot cheaper than funding more costly commodity programs, he said. "Funding for MAP and FMD have been slashed for so many years it has really put a strain on the growth of those export efforts," Blankenship said.

Ron Moore, president of the American Soybean Association and a farmer from western Illinois, noted the European Union spends $1 billion a year on similar programs, which is about four times more than the U.S. spends. ASA wants to see funding double for the MAP and FMD programs. Moore said those programs were critical to leverage checkoff funds to expand markets overseas.

"There is above $10 return on investment for every dollar spent on export promotion programs," he said. "So, from a farmer's perspective, that's a pretty good return on anybody's investment."

Despite President Donald Trump calling the Trans-Pacific Partnership a "potential disaster" for the country, the farm groups aren't willing to give it up easily. On the first day of the NCGA Corn Congress, delegates representing corn farmers voted to keep language in their policy book supporting the Trans-Pacific Partnership on the prospect that the Trump administration and Congress may change their opinion and re-enter the trade deal.

Recognizing Mexico is the top market for U.S. corn, NCGA delegates also kept policy supporting the North American Free Trade Agreement and to "oppose efforts to reopen the agreement." Delegates debated striking language opposing renegotiation because the Trump administration has plans to do so. Still, others argued NCGA should stick with its support for the current trade agreement and oppose efforts that could hurt U.S. corn demand. The vote to oppose reopening the agreement was 74-47.

The MAP and FMD focus from all three of the major commodity groups somewhat reflected Moore's comments to make sure farm groups "speak clearly, forcefully and in a unified manner" to get a new farm bill passed.

"In the previous farm bill, it took a little bit longer than anybody expected because we weren't speaking in a unified manner," Moore said.

ASA wants to ensure farm-bill programs get the funding necessary to meet the needs of the program. In some cases, that means increased funding, Moore said. This is important, considering the state of the farm economy, he added.

"Now is not the time to cut support for current farm programs," he said.

To make his point, Moore pointed to costs for the 2014 farm bill coming in lower than expected, mainly because of $84 billion in savings over 10 years in the nutrition programs, because the economy has improved and few people are on those programs. Due to lower commodity prices, farm programs spending is $16 billion higher than expected, but crop insurance is also costing $10 billion less than projected, over the 10-year budget scores for those programs.

In the end, the farm bill is scoring at about $78 billion less than initially expected, over 10 years. "There is no reason to cut further funding from the next farm bill," Moore said.

Still, changes can be made, Moore added. The Agricultural Risk Coverage program (ARC) should be tweaked to use Risk Management Agency yield data to eliminate payment discrepancies, he said. Further, Moore recognized cotton and dairy producers need changes to the programs for them, "but not at the cost of the other commodities."

Alluding to possible planting distortions, Moore also said the ASA does not want to see farm-program payments switching from formulas using base acres to planted acres. Some analysts have projected if that were to happen, the U.S. could be in violation of the World Trade Organization rules for crop supports. "We also don't want to have any issues that would have us in violation of our WTO requirements," Moore said.

Regarding crop insurance, ASA's Moore said his group will oppose means testing and caps for crop insurance premiums or indemnities. He added there were already groups pushing such proposals in Washington.

In the Corn Congress, NCGA also stressed the importance of protecting the Renewable Fuel Standard and called on the Trump administration to change rules to allow higher blends of ethanol to be sold in the summer.

The Corn Congress will revisit the Renewable Fuel Standard on Saturday. NCGA delegates had debated language to oppose any changes to the RFS, including changes to the point of obligation. Yet, NCGA also has policy calling on EPA to change the RFS to allow corn to be classified as an advanced biofuel. Those two policies directly conflict, so farmers tabled their debate until Saturday to deal with that language.

NCGA leaders told reporters later they realize they don't know all of the details regarding what a change in the point of obligation would mean for farmers.

Ethanol and corn groups have been working on dealing with the restrictions with vapor pressure on higher ethanol blends for years as well, and they would like to see that restriction lifted. The question is whether that becomes a "zero-sum game" for ethanol demand.

There has been a lot of talk from lawmakers and others about raising the acreage level for the Conservation Reserve Program. A vote Thursday by NCGA delegates showed that isn't a slam-dunk issue among farmers. Over fears of competing with higher CRP rental rates, delegates voted to reject an increase in the acreage cap for the program. 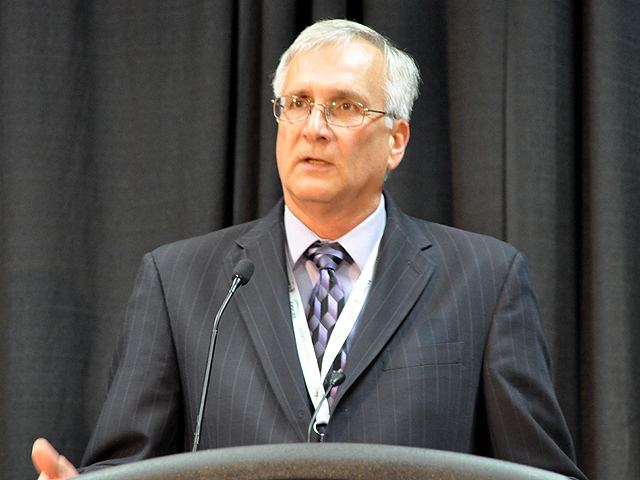