OMAHA (DTN) -- At least a few agricultural groups were vocal in their criticism Monday after President Donald Trump followed through on a campaign promise by signing a memorandum to withdraw from the largest trade deal the U.S. had ever negotiated, the Trans-Pacific Partnership.

In signing the executive order to withdraw from the 12-country trade pact, the president said the decision is "a great thing for the American worker."

Trump added, "We've been talking about this for a long time."

Agricultural groups have been some of the biggest supporters of the Trans-Pacific Partnership, commonly called TPP. The American Farm Bureau Federation, for instance, had released a study last year stating that U.S. net farm income would increase by $4.4 billion once TPP was fully implemented. But Trump campaigned aggressively against the trade deal in the presidential race and he fed off the resentment of trade deals in regions of the country that had lost manufacturing jobs over the past two decades.

White House spokesman Sean Spicer told reporters Monday that TPP basically put the U.S. "on par" with several smaller countries that got great access to the U.S. without great benefit to U.S. companies.

Spicer said the president's trade team would immediately start negotiating bilateral trade deals that would give the U.S. more leverage and flexibility.

Beyond agriculture, some key business groups such as the U.S. Chamber of Commerce had supported TPP as well. The Chamber had noted the trade deal would have cut tariffs on roughly 18,000 U.S. goods sold overseas.

The U.S. already does $864 billion in exports of goods and services to the other 11 countries in the TPP trade deal, which includes Australia, Brunei, Canada, Chile, Japan, Malaysia, Mexico, New Zealand, Peru, Singapore and Vietnam.

Several of the other TPP countries, however, also are in the middle of a 16-country trade deal being negotiated with China and India called the Regional Comprehensive Economic Partnership. That deal, if completed, would become the largest trade deal ever.

Some agricultural groups quickly criticized the president's move. The National Cattlemen's Beef Association saw TPP as a chance to level the competitive playing field with Australia in marketing beef to Japan. NCBA leaders had argued that just in Japan the U.S. was losing roughly $400,000 per day in exports because Australia has a 10% tariff-rate advantage over U.S. beef. TPP would have leveled the playing field and boosted beef exports to Japan by as much as $800 million.

Tracy Brunner, president of NCBA, also noted that U.S. beef exports to Mexico had grown by 750% since the North American Free Trade Agreement was implemented. He expressed concern that the Trump administration was taking these actions on TPP and NAFTA without any road map or alternatives.

"Sparking a trade war with Canada, Mexico, and Asia will only lead to higher prices for American-produced beef in those markets and put our American producers at a much steeper competitive disadvantage," Brunner said. "The fact remains that 96% of the world's consumers live outside the United States, and expanding access to those consumers is the single best thing we can do to help American cattle-producing families be more successful."

Another group weighing in negatively was the American Soybean Association. Illinois farmer Ron Moore, president of ASA, urged the Trump administration to immediately announce how it will engage and expand market access in the Asia-Pacific region without TPP.

"Trade is something soybean farmers take very seriously. We export more than half the soy we grow here in the United States, and still more in the form of meat and other products that are produced with our meal and oil," Moore said. "The TPP held great promise for us, and has been a key priority for several years now. We're very disappointed to see the withdrawal today."

The American Feed Industry Association stated it was "extremely disappointed" with Trump's decision to withdraw from TPP. "TPP, and agreements like it, are key to setting the terms and rules for future trade relationships, creating higher standards and expectations than previous trade deals. While the U.S. economy generally deals with a trade deficit, agriculture is the one segment where our country enjoys a strong trade surplus," said Joel Newman, president and CEO of AFIA.

The National Milk Producers Federation and U.S. Dairy Export Council also called on Trump "not to retreat from pursuing new trade opportunities in the Pacific Rim, and to protect the agricultural trade relationship between the United States and Mexico."

At least some lawmakers lamented the decision as well. Sen. John McCain, R-Ariz., chairman of the Senate Armed Services Committee, issued a statement calling Trump's decision to pull out of TPP, "a serious mistake that will have lasting consequences" for the U.S. in terms of the economy and strategic position in the Asia-Pacific region.

"This decision will forfeit the opportunity to promote American exports, reduce trade barriers, open new markets, and protect American invention and innovation," McCain said. "It will create an opening for China to rewrite the economic rules of the road at the expense of American workers. And it will send a troubling signal of American disengagement in the Asia-Pacific region at a time when we can least afford it."

Meanwhile, Trump also made it clear he wants to immediately start renegotiating NAFTA. Trump said Sunday he would reach a "very good result" for everybody.

David MacNaughton, Canada's ambassador to the U.S., commented Sunday to reporters that Canada would try to avoid becoming "collateral damage" as the U.S. seeks to make changes that would largely affect the relationship with Mexico. Enrique Pena Nieto, Mexico's president, is already scheduled to meet with Trump at the end of the month.

Early Monday, Trump met with several top business leaders, including Andrew Liveris of Dow Chemical. In that meeting, Trump promised lowering the tax rates for corporations from a 35% tax rate down to 15% to 20%. Trump also said regulations would be cut by as much as 75% for businesses. Yet Trump also warned business leaders that there would be consequences for companies that relocated manufacturing jobs abroad.

"If that happens, we are going to be imposing a very major border tax on the products when it comes in," Trump said. 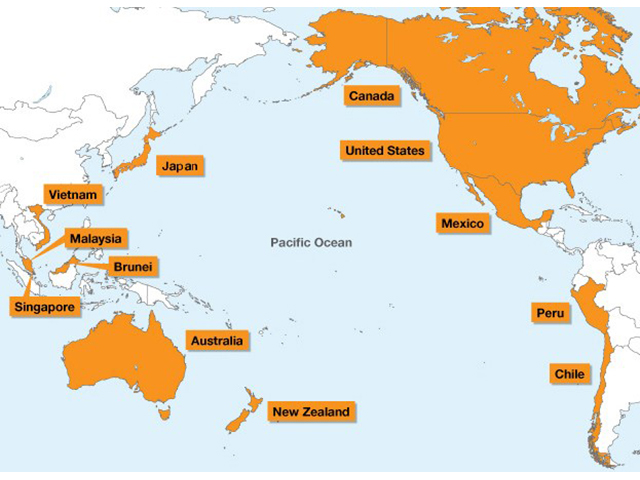