There are no short answers when asking a producer about his replacement-heifer program. He may raise his own replacements this year but won't the following year. He may buy them as a way to bring in genetic improvement or to shorten and define the breeding season. He may do all, or none, of the above. For Gene Miller, there's only one absolute when it comes to replacement heifers, and that has to do with quality.

Miller, a grass-fed beef producer in Delta, Alabama, says: "Whether you raise your own replacements or you buy them, I believe you get the best you can afford. Now, what that is will be different for everybody. But if you are always adding the best you can to the herd, you will improve it over time."

A full-time cattle producer since 1990, Miller spent a career as an educator, returning to the family operation after his dad was killed in a farming accident. His commercial herd of 175 to 200 cows produces calves sold in the certified grass-fed market, a transition he made in 2011. The American Grassfed Association member sells direct to consumers, as well as to retail outlets including Organic Harvest, in Hoover, Alabama, and Piggly Wiggly stores in the Birmingham area.

Miller prefers to raise his own replacement heifers, generally picking the 20 best calves each year. He bases that decision on his experienced eye, with a preference for those that come from his best cows. These females won't calf until they are 3 years of age, so the commitment is lengthy. The operation has a 90-day fall calving season, beginning in September for heifers and October for cows. Calves are weaned at 8 to 9 months of age, with the final choice for replacements taking place around 14 months of age.

Miller expects to get an average of 12 productive years out of a heifer he develops. Prior to that first calf, he has put three years of feed into her, not to mention vaccinations, health care and costs associated with his natural breeding program.

Genetic improvement is not as much the role of the heifers Miller retains as it is of the bulls he buys. The producer leans toward a good-quality bull, using genetically enhanced expected progeny differences (GE-EPDs) to help improve the herd year to year. He emphasizes carcass traits, milk production and moderate birthweights. His goal is to keep those weights below 90 pounds.

"You can control half of your genetics with good bulls, and I buy what I think is a very good-quality bull. For me, this is more the focus than heifer genetics," he explains. Miller's herd is a mix of predominantly Black Angus and Simmental. He runs Angus or SimAngus bulls.

Producers such as Miller may soon be rethinking the economics of buying versus raising replacements. Eldon Cole, University of Missouri Extension livestock specialist and a Southwest program coordinator for the state's Show-Me-Select Replacement Heifer Program, says the cattle industry is in a transition period regarding replacement-heifer prices. Ultimately, they are becoming more affordable.

"I think you are going to see a lot more people decide to buy replacement heifers in 2017 because of declining prices," he says. "With lower feeder-calf prices, reality has set in, and producers realize it takes a long time to make money out of a $2,500 to $3,000 heifer."

Cole adds many producers paying record-high heifer prices in 2014 and 2015 did so to improve the overall quality of their herds. But those same quality heifers now are ringing the bell in the $1,500 to $1,600 range. That would be a bargain for Show-Me-Select program-bred heifers, which Cole says developers put a lot of extra effort and money into.

"Whether these heifers are home-raised, or they are bought and developed for a year to the bred-heifer stage, they represent a long-term commitment. One producer told me he runs these heifers through the chute eight or nine times in the year of development. The expectation is that the extra effort and quality means buyers are getting heifers that will stay in a herd at least an extra year," he explains.

Producers making a decision to buy or raise replacement heifers have to look at the economic side of the decision at least as much as the genetic side, says Lee Schulz, Iowa State University Extension livestock economist.

"The big things driving these replacement decisions are typically going to be feed costs, prices for calves, cull cows and replacement heifers, and interest rates," he says. "So if you choose to buy replacements, the price you have to pay on the open market matters very much. If you're developing your own, feed costs tend to be most important. Either way, longevity is going to be critical to profitability when it comes to replacements."

Schulz says while investment costs have dropped, so, too, have anticipated returns.

"Putting these decisions into the context of the current situation and outlook is the best we can do. But this is a dynamic situation that changes year to year and even within a year. We are in an interesting situation in that this is the first time since the early 1990s that we've experienced a cyclical expansion in the cattle industry. When you look at all the players, including producers, risk-management specialists and lenders, you have some who have experienced this before, and some who don't have the knowledge base as to what happens as you go from a tight to an expanding supply."

As an example, Schulz says cull-cow and replacement-heifer prices were at historic highs at roughly the same time. At their 2014 peak nationwide, cull cows were bringing $104 per cwt (boning utility price, 800 to 1,200 pounds, Sioux Falls), and bred-beef heifers cost $2,500 per head or more. That dynamic is changing as expansion continues.

"Now, all cattle prices are decreasing, and that means cull prices are lower, as well," Schulz explains. "So when you are making a decision as to retaining heifers, a long-term investment, you have to include her value as a cull cow at some point in the future. You don't repay that replacement female just with the calves she produces; you often need the cull-cow revenue to break even or make a profit."

While lower prices are a negative right now, Schulz adds that looking at today's market with a backdrop of historical cycles, there is momentum in the industry when you consider this is the youngest herd in history. That equals a herd that should be very productive, a plus in terms of cost of production and efficiency.

"With the exception of some pockets of drought, we are looking at very favorable production conditions. That should keep cost of production relatively low," he says.

"The only way to pay back the investment we've made in this herd and these heifers is to hold them longer and get more weaned calves out of them," Schulz continues. "Now, perhaps more than ever, the focus should be on tools that can be utilized to improve cow longevity and enhance lifetime productivity."

Schulz concludes while the industry has added numbers, it's also added genetic potential.

"This is a young, very productive herd," he says. "That should allow us to increase pounds of beef produced and overall efficiency of the nation's herd."

-- environmental restrictions on growth to weaning

Potential advantages of raising replacement heifers include having more genetic control, a better understanding of the heifer's background and more control over possible disease.

Buying replacements can free up pasture or facility space for a cow that will produce a calf. The need for bull power can be reduced, and producers can put more emphasis on traits like growth or carcass quality. Buying bred heifers also helps producers expand the herd or change breeding programs more quickly.

Gene Miller, Delta, Alabama, doesn't expect a calf out of his homegrown replacement heifers until they are 3 years of age. Some may consider that a wasted year; others would agree it's just right.

There is a world of difference between calving a heifer at 2 or calving her at 3. University of Arkansas research shows as profit margins tighten, managing a heifer to calve as a 2-year-old should effectively mean she will produce one extra calf in her lifetime. That extra calf often comes at a cost, however.

A common negative for 2-year-olds is the increase in calving difficulties. Research from Texas A&M University shows 2-year-old, first-calf heifers are three to four times more likely to have calving difficulties than 3-year-olds, mostly because of small pelvic areas and heavy calf weights. This can be helped by using low-birthweight or calving-ease sires on heifers. Two-year-olds often have lower-weight calves and, in some cases, a limited ability to utilize forages as they are still getting in permanent teeth. Despite these considerations, 2-year-old heifers usually recover and even surpass those that first-calved at 3 from an economic standpoint.

Getting that first calf out of a 3-year-old obviously delays returns and can equal one less calf over a cow's lifetime. The chance to measure her production, and thus make a keep-or-cull decision, is also put off for a year. On the plus side, these heifers will be sexually mature at the time of breeding, and that would result in higher pregnancy rates. 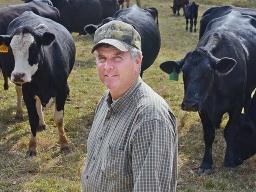