Bill and Claudia Tucker believe in setting the mark high and holding it there. Preconditioning is never optional. Tucker Family Farms is a seventh-generation operation in Amherst, Va., expanded in 1992 to include retained ownership through slaughter. The ability to follow cattle through finishing and harvest, and see carcass and feedlot data, has confirmed to him that an emphasis on calf care and early growth yields real results.

"We have cattle of known genetics," Bill Tucker says. "We've been collecting feedlot and carcass information on them for 22 years. The only way to extract the maximum value out of those cattle is to take them to the optimal end point. While we don't have complete control over the market, we do have significant control over our cattle's genetic ability to perform."

Preconditioning is a major step in reducing the risks, he continues. "I trust the guys who feed my cattle. They do a good job of health management. But we both have a role in keeping that calf healthy."

Tucker says the health benefits of preconditioning were obvious last fall when a semi carrying his calves broke down on the way to Decatur County Feedyard, in Oberlin, Kan., normally a 20-hour trip. The calves had to be off-loaded at a sale barn and held until they could be reloaded and continue on their way.

"They were on the road for 56 hours," he says. "When they came off the truck at the feedyard, the temperature was in the teens. We didn't lose a calf."

Tucker's preconditioning program includes timely vaccinations and deworming for calves. Fall-born calves will get Vista 5 SQ for respiratory diseases, as well as the 20/20 Vision 7, both by Merck. He deworms with Cydectin and implants steer calves. Boosters are given three weeks prior to weaning.

Almost half of Tucker's weaning and preconditioning takes place on fescue pastures, either Max Q or Kentucky 31. He gives calves time to learn to eat out of a trough and drink from an automatic waterer. That eliminates stress at the feedyard, ensuring calves stay hydrated and fed.

"It is so very important that they get off the truck at the feedyard and eat and drink," he says. "Water quality and quantity is often overlooked. I stress to my guys at weaning, if you keep the water troughs clean and full, you have paid for your salary."

Before they leave the farm, calves are fed a basic mix of two-thirds corn silage and one-third orchardgrass haylage. In addition, Tucker feeds commodities, most often corn gluten. He does this in drylot or when calves are still on pasture. He adds that he believes a preconditioning phase at the farm lets calves get over the stress of being commingled and helps them sort out their pecking order.

One thing Tucker doesn't do is try to put finish on the Black Angus, Red Angus and Gelbvieh crossbred calves he raises.

"We add frame and skeleton and muscle, but not fat. The finishing yard is the place to add fat, not while we're preconditioning and backgrounding," he says. They add frame for about 80 cents per pound.

While he does some sorting at the front end of the preconditioning period, he doesn't obsess over trying uniform weights. "We ship multiple loads, so health and the ability to cope with stress is far more important to us than calf uniformity," Tucker stresses.

He adds that Decatur County Feedyard, where he finishes cattle, has an electronic sorting system that puts calves with others that will finish at the same time. This system works well for Tucker, since weights at weaning can range from 500 to 700 pounds, depending on whether they come from his home farm, rented ground or a contract producer. He keeps about 600 females under his management, with 500 head more managed by contractors. He markets all steers and the bottom end of the heifer crop, amounting to some 350 head each year from the fall- and spring-calving operation. 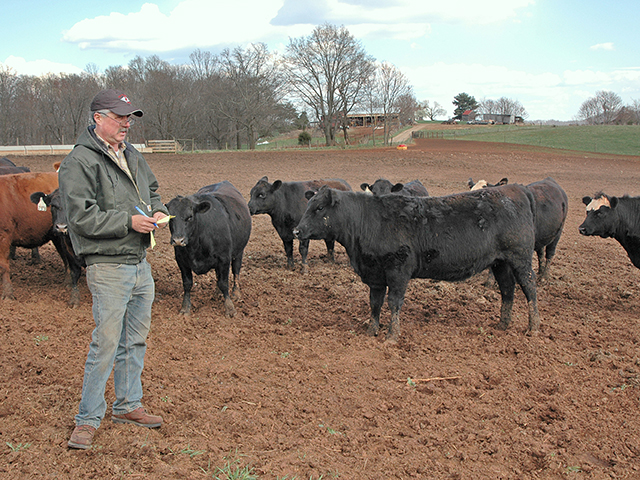