When calf prices fall, some producers will inevitably question whether it's time to cut back on expenses tied to preconditioning programs. Are the additional costs and time needed to meet program requirements going to generate a profitable return? Veteran cattleman Dan Morgan has seen price swings before, and he believes preconditioning and preconditioned calf sales won't lose their luster anytime soon.

Morgan and son Zack run a cow/calf herd in Corning, Iowa. Morgan is also a longtime commodity broker. He has seen the highs, lows and just about everything else in between with the cattle market. "I personally think preconditioned sales are here to stay for most cow/calf producers," Morgan said.

John Harrington, livestock analyst for DTN/The Progressive Farmer, said the question about selling calves in preconditioned sales at lower prices is a valid one. He believes it's possible some producers who are in a cost-saving mode because of market downturns may decide these sales are not worth the additional costs and effort moving forward.

Cow/calf producers have enjoyed good margins in recent years, but those margins narrowed considerably in late 2015, continuing into the first half of 2016. Calf prices, Harrington said, have declined about 30% in the last year.

Despite these lower prices, the analyst believes most producers who are accustomed to selling calves in preconditioned sales will continue to do so. He added that demand for preconditioned calves should always be there from cattle feeders. Also, the benefits of maintaining those established relationships and a positive reputation with buyers will continue to be extremely important for cattlemen, making preconditioning something that is about more than dollars.

Morgan agreed with Harrington, adding he continues to see feeders looking to purchase calves through preconditioned sales and spending more for calves that have had their shots and have been castrated and weaned. All of these steps contribute to lower death losses down the line, a benefit still worth paying for, even in a declining market.

"I think many cattle feeders look at preconditioned-calf sales as almost an insurance policy," Morgan said. "They are willing to spend more if it lowers their risk some."

Just how much more are they willing to spend? Ethan Oberst, an analyst for Colorado-based CattleFax, said from 2011 to 2015, premiums for preconditioning have fluctuated dramatically.

In 2011, a cattleman could have expected a premium of $4.23 per cwt on a preconditioned 550-pound steer. The next year, that premium climbed to $5.49 per cwt. Lower calf prices in 2013 nudged it down slightly, but by 2014, some preconditioned premiums were averaging $9.68 per cwt. Last year marked a big drop, however, taking premiums down to $3.33 per cwt.

Oberst said while average premiums for preconditioned cattle have not been calculated for 2016, generally, they can be expected to follow market prices.

The Morgans have both spring- and fall-calving crossbred herds. They sell spring calves at Iowa's Dunlap Livestock Auction in January, where they participate in the Western Iowa Feeder Cattle Producers Organization. The group's rules for preconditioned feeder calves include a 30-day weaning window, minimum of 60 days ownership, vaccinations, castration, dehorning and a veterinarian-signed preconditioning certification.

Fall calves are sold in April at Creston Livestock Auction's "Back to Grass" calf and yearling auction.

For his extra efforts on the preconditioning side, Morgan said he can expect anywhere from $4 to $7 per cwt more on calves. The final premium depends on a number of factors, including overall quality, as well as color.

While some Midwestern and Southeastern cattlemen may ponder whether they should utilize preconditioning sales or not, Larry Olberding, Jr. said he does not have the option. The Connell, Washington, rancher lives in a region with no preconditioned calf sales in place for producers like him.

Olberding said the lone calf market in his area, Toppenish Livestock Market, has sales from September to December. There are no specific preconditioned sales.

"Buyers are willing to bump up prices on calves that have good reputations, but not to the point like a true preconditioned sale would," Olberding said. He estimates he receives a $4 to $7 per cwt increase in his calf price by having a vaccination program. Even with today's lower prices, he said a smaller premium is still better than no premium at all.

Calves are born in the spring and vaccinated at branding; with a second round of vaccinations in September and another just prior to sale time in late October. Bull calves are castrated. Calves are not always weaned 30 to 60 days, depending on the sale. Some are weaned right off the cow.

Olberding believes the area's lack of preconditioned sales is simply due to a lack of competition.

"There are very few feeders out here anymore," he said. "If we would have maybe 10 to 15 bidders at the auction, instead of four or five, this could help our calf prices." 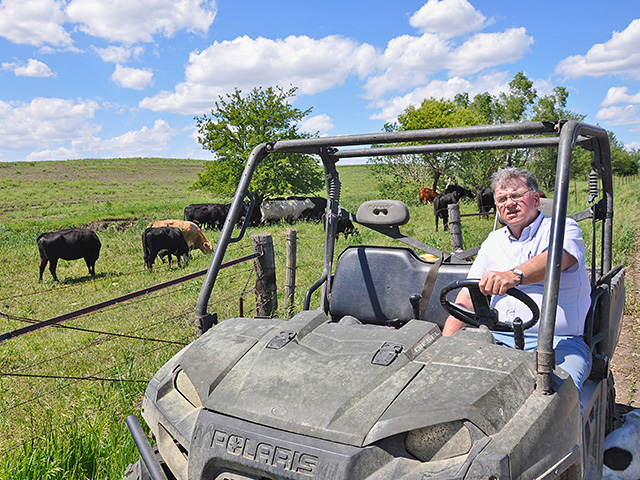