Researchers and cattle producers have known for years that fescue pastures containing a common toxic endophyte can hurt cow conception rates. That same endophyte can affect semen quality in bulls, as well.

Scott L. Pratt, Clemson University animal scientist, said researchers there first started exploring the connection in 2011. Rather than letting young bulls graze on fescue containing the endophyte, they fed them a concentrate grain ration containing fescue seed with the endophyte. The control group also got a concentrate ration with fescue seed, but in that case, the seed didn't have the toxic endophyte.

That first year there was not a lot of difference, Pratt reported. He said both groups gained weight, there was no rough hair coat and no difference in semen quality.

However, in 2012, Pratt and his coworkers started a series of grazing trials, scheduled to be repeated through the spring of 2015. Each year, 25 to 30 bulls, 12 to 13 months old, were divided into two groups after passing a Breeding Soundness Exam.

One group grazed Kentucky 31 fescue containing the toxic endophyte. The other group grazed MaxQ fescue and Texoma fescue. Both of those varieties have a novel endophyte that does not produce toxin.

The bulls were grazed from February through either June or August, depending on the year and forage availability.

Pratt said they collected semen from the bulls every 28 days, extended it to a commercial dose, froze it, then thawed it and assessed the motility of the sperm.

Since semen from the bulls cannot be frozen effectively, the researcher is conducting fertility studies by extending fresh semen from the bulls and using timed artificial insemination (AI) to breed cows. So far, Pratt said he is seeing lower conception rates in those cows bred with semen from bulls grazing Kentucky 31 fescue.

He said their results were similar to those from a study done by University of Tennessee researcher Neal Schrick, although Schrick used in-vitro fertilization rather than AI.

"I don't like to make projections. I want to do a couple more replicates of these studies over the next few years. But the trend indicates there are some fertility issues with semen from bulls grazing endophyte-infected fescue," Pratt said.

He recommended that producers, if given the option, not breed the herd while grazing it on spring fescue, as this is when endophyte levels tend to be at their highest.

With bulls, the endophyte may impact the ability to freeze semen and motility. On the cow side of the equation, there may be reduced pregnancy rates. Pratt reported: "Data generated here at Clemson and from Arkansas shows approximately a 20 to 30% reduction in pregnancy rates if the cows are on toxic fescue." 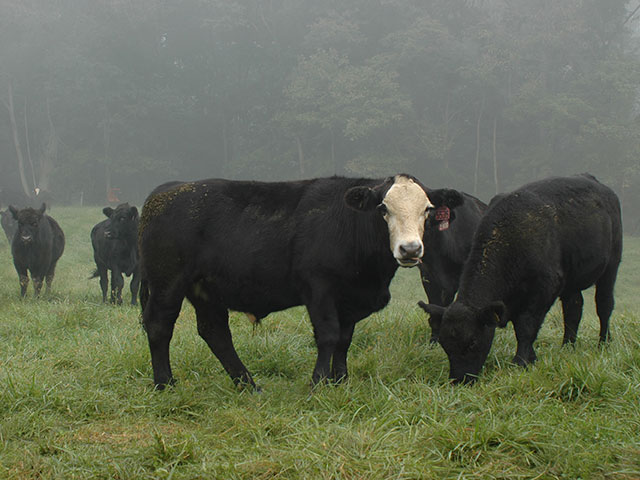