OMAHA (DTN) -- Forage sorghum may be the new silage choice for farmers with limited irrigation capacity.

Forage sorghum is becoming popular in dry climates such as the Texas Panhandle and southwest Kansas, as it is more drought tolerant and less expensive to grow compared to corn silage, according to Isaya Kisekka, assistant professor/agricultural engineer for the Kansas State University Southwest Research and Extension Center in Garden City, Kansas.

Kisekka is conducting studies on forage sorghum and corn silage yield and forage quality response in full and deficit irrigation in southwest Kansas.

"The advantage of corn is that it will give you higher tonnage and typically has superior forage quality. But we are looking into forage sorghum hybrids that would give us quality as good as corn silage gives us, as well as the tonnage," he said.

He said that, previously, the Brown Mid-Rib (BMR) forage sorghum hybrids had good quality, but tended to be low in tonnage. But as breeding continues to improve, Kisekka said, some of the new BMRs produce both quality and tonnage. However, there is great variability among forage sorghum hybrids; therefore, selecting the right hybrid to meet your goals can be challenging.

Kisekka said to think about choosing forage for silage like shopping for a car that will give you the most miles per gallon.

"You want to choose a forage sorghum hybrid that gives you the highest tonnage per inch of water or one that optimizes water productivity," he said. "The goal is that if you have little water, you should try to get the best from every inch."

Kisekka stressed that timing is crucial with limited irrigation capacity and listed the most important times to irrigate:

1. Even 1 inch of application at planting under dry conditions will help establish stands, especially if little rain is received after planting.

2. Another crucial time is about 30-35 days after emergence, when the seed head is starting to form.

3. If irrigation is very limited and farmers can only put on 1 to 2 inches of water, applying the water at the boot stage would be the best time to irrigate in order to get the greatest yield response to irrigation.

"For most crops, you really want to minimize any water stress at flowering or during reproductive growth stages," Kisekka said.

Kisekka added that farmers should terminate irrigation about two weeks before planning to harvest forage sorghum, but this should be done in conjunction with soil water monitoring using a soil probe or sensor.

"You don't want the plant too wet at harvest," he said. "You want the plant to drop down to 65%-67% moisture before you cut it." Also, harvesting at the right growth stage is critical to ensure good quality. Farmers should target harvest at the soft dough stage.

A corn/forage sorghum mix is a good combination for a split pivot arrangement in which two crops share one pivot. This works well with early corn planted between April 20-25. Kisekka added if planting that early, farmers need to monitor soil temperatures to make sure they are in the optimal range for germination. Forage sorghum would then be planted around June 15-20, depending on how wet the fields are.

"The goal here is to avoid overlap of peak irrigation," Kisekka said.

He added that for the corn/forage sorghum mix, farmers should avoid planting long-season hybrids, but rather use early to medium hybrids to avoid having peak irrigation water need periods overlapping.

Wheat and forage sorghum are also a good pairing, and is an easier crop rotation to work with since you have a summer crop and a winter crop, Kisekka said. Wheat is planted in October and needs irrigation after April or May, while forage sorghum is planted in late June.

Growing forage sorghum has worked out beautifully for Darrell Goss, who raises about 600 acres of forage sorghum on his farm northeast of Garden City, Kansas. The area is typically dry and most crops have to be irrigated.

Goss said he has been raising forage sorghum for many years because it is much less expensive to grow and takes much less water.

"I can grow sorghum with less than half the water of what it takes to grow corn," he said.

"We have to save water all we can because it's running out," he said. "We have to have meters on our wells. Every gallon that's pumped is metered, and we have to turn that all in every year."

Everything Goss raises is sold to a nearby feed yard that uses it for silage.

Before he began raising the sorghum, Goss said he raised corn for the feed yard. After pumping limits began restricting his irrigation, Goss said he had a talk with the feed yard manager. He told the manager he did not have enough water to continue to grow corn and asked if he would be interested in forage sorghum.

The manager did some studying and said he was willing to try it.

In the end, the feed yard manager liked the forage sorghum even better than corn. The manager said it goes through his mill much better and causes almost no bloat with the cattle.

Cheryl Anderson can be reached at cheryl.anderson@dtn.com 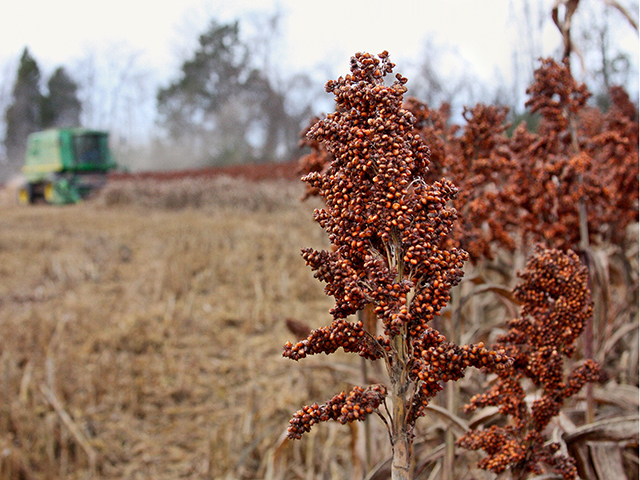