Incorporated into a T6 tractor body, the revolutionary in-line 6-cylinder methane engine has an Electronic Stoichiometric Multi Point Injection System to produce up to 180 peak horsepower and 545.8 foot-pounds of torque. It will run all day on a single fill-up, which can be accomplished as quickly as filling a tank of diesel.

The concept tractor will do all the work of a diesel-powered T6 with up to 80% less total emissions, Sean Lennon, New Holland global tractor manager, told DTN/The Progressive Farmer.

If you use homegrown crops to make methane, there will be "virtually zero total emissions" from this tractor. Another advantage: it is quiet, making 50% less noise than a similar diesel tractor.

When you are trying to sell a revolution, looks are important. So New Holland hired designer David Wilkie, who came from an automotive background where he worked on such icons as Lamborghini, Maserati and Porsche. The result is a sleek tractor with unexpected curves but a functional nature.

The cab, for instance, is like a glass bubble with wrap-around windows and a sloping domed roof. Fuel tanks are made of composite tubular structure, which is molded to fit the design of the tractor -- no more bulky storage cylinders.

Why? New Holland has spent a decade positioning itself as the "Clean Energy Leader" in the ag field. At the heart of that concept is a research farm in northeast Italy, which has a goal of energy independence for farmers. One missing piece to that puzzle has been tractors that do not require outside sources of power. The concept T6 could be that missing piece, Lennon said: "It is the vital link that closes the loop of the CO2 neutral cycle on the farm."

Anything as radically different as a methane-powered tractor inevitably will be a target for skepticism. Bret Lieberman has ready responses to skeptics. "Five years ago, who could have predicted where Tesla electric cars would be today?" the New Holland's vice president for North America asked.

While the idea of alternative energies is more robust in Europe -- where the methane tractor was developed -- Lieberman said there is interest on this side of the Atlantic. He told DTN/The Progressive Farmer there already are 400 bio-digesters in North America and that pockets of interest for the methane tractor already exist in dairy areas such as Vermont. "Dealers tell me they could sell this product today," Lieberman said.

Success for the concept T6 success is not tied to methane alone. It also can burn CNG, which is becoming widely available. The tractor is versatile and will appeal to municipalities and other government entities for mowing, snow removal and other types of roadwork, Lieberman said.

In some cases, both for farmers and other potential customers, "Payback will be as much a morality position as an economical position" and will be based on beliefs and environmental consciousness, Lieberman said.

Production of the new tractor is scheduled to begin in three years.

Meanwhile, having overcome technological barriers, "We will have to work on the marketing side," he said. 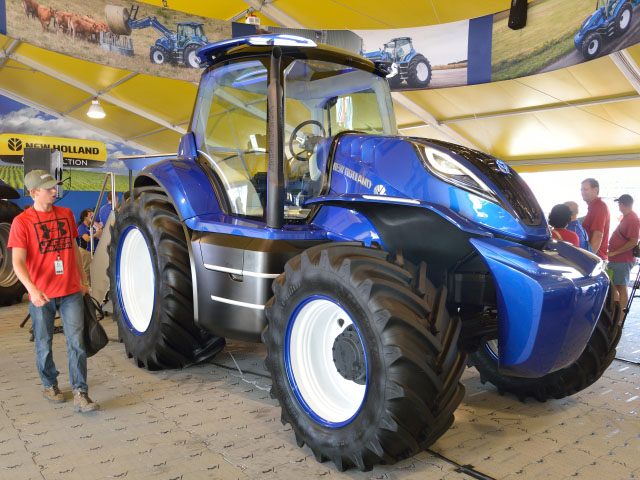