PLATTSBURG, Mo. (DTN) -- The guessing game is over. After a couple of months of industry speculation about who would buy Precision Planting, AGCO answered the questions this week with the announcement that it would be the new owner of the multi-faceted planting technology company. Details of the proposed deal are not yet available.

Precision Planting became the renewed object of sale rumors this spring after parent company The Climate Corporation (a Monsanto subsidiary) backed out of a previous deal with John Deere. That deal had been under scrutiny by the U.S. Department of Justice (DOJ), which almost a year ago said it was concerned about possible monopoly issues.

Precision Planting and Deere are both owners of high-speed planting technologies. Precision Planting's is a retrofit system called the SpeedTube meant to retrofit on a variety of manufacturers' planters. Deere's fast-planting system is ExactEmerge and is intended only for Deere planters. Both systems were unveiled in early 2014 and rely on conveyor belt systems rather than gravity-based seed tubes to deliver seed to the trench. Both systems claim increased accuracy and increased speed. At up to 10 miles per hour, they can place seed twice as quickly as seed tube systems.

The companies created an industry-wide stir in November 2015 when they announced an intended deal. The buzz renewed in August 2016, when the DOJ -- saying the deal would give Deere a monopoly on fast-planting technology -- brought suit to stop the agreement. Deere responded that the lawsuit was "based on flawed assessments of the marketplace."

The case went dark for months as the parties prepared their legal cases. Perhaps concerned about the eventual lawsuit results and the legal costs, Climate this May abruptly announced it was pulling out of its deal with Deere. It also announced in a news release, "The company intends to sell the Precision Planting equipment business and has spoken with several third parties that have expressed interest in purchasing it."

The guessing game began about the identity of those "several third parties." AGCO's name popped up among the other full-line manufacturers, none of which owned conveyor belt fast-planting technology. CNH, parent company of Case IH and New Holland, was in the group of speculative buyers. Kubota also was there. It long has indicated it wants to be a full-line manufacturer and had recently purchased Great Plains Manufacturing, a planter and drill maker. Various "surprise" buyers also figured in coffee shop guessing games.

Any of the suitors would have been interested in more than the SpeedTube. Precision Planting holds the patents on a suite of products, including SeedSense monitors, vSet meters, vDrive electric motors and DeltaForce automatic downforce controllers. Just as important as the hardware and software are the brainpower and culture at Precision Planting. When Deere originally announced its intention to buy the company, Cory Reed, senior vice president for the John Deere Intelligent Solutions Group, called Precision Planting, "an incredible innovation engine," which AGCO will own that if the prospective deal is consummated.

"The acquisition of Precision Planting will solidify AGCO as one of the global leaders in planting technology and strengthen our position as a full-line partner for professional farmers across the globe," said Martin Richenhagen, AGCO's chairman, president and CEO. 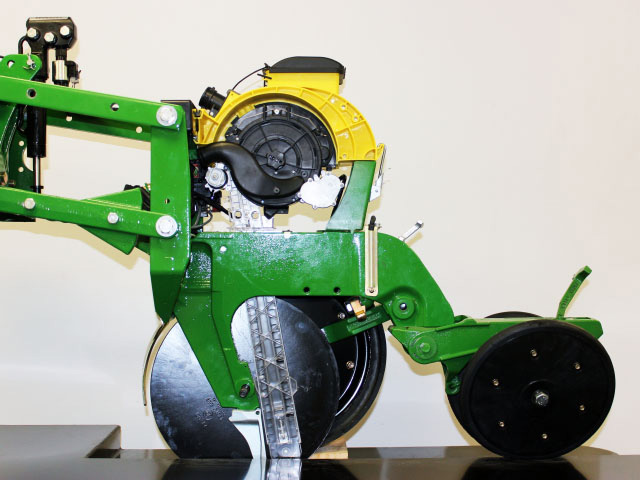