OMAHA (DTN) -- For the second week in a row, retail fertilizer prices have shifted considerably lower, according to locations tracked by DTN for the final week of December 2022. All eight major fertilizers are once again less expensive compared to last month.

Half of the fertilizers were significantly lower compared to last month. DTN designates a substantial move as anything 5% or more.

Both urea and anhydrous are 6% less expensive looking back to last month. Urea had an average price of $751/ton while anhydrous was at $1,325/ton.

Farmers will be seeing higher input prices in the New Year which will put pressure on farm income, according to a Kansas State University (KSU) Extension agricultural economist. In a KSU news release titled "Kansas net farm income holding steady in 2022 but next year could be tougher" (https://www.ksre.k-state.edu/…), KSU Extension ag economist Gregory Ibendahl said farmers should be cautious heading into 2023 with rising input prices, led by fertilizer, and continuing drought concerns.

"Going into 2022, (the agriculture industry) was definitely in an environment of higher input prices; but I think a lot of farmers were able to lock in (lower prices) for some of those inputs before they went very high," Ibendahl said. "So, I don't think farmers fully felt the effect of higher prices in 2022."

The full brunt of higher input prices will most likely be felt in the 2023 growing season. Ibendahl said the cost of anhydrous topped $1,500/ton in 2022. Farmers should be prepared for four-digit anhydrous costs to stick around through 2023, he said.

"Based on my models, I think we're going to be looking at $1,200/ton to $1,500/ton for the next year or two, so it's going to be pretty high and I don't think there's going to be any way to avoid it like some farmers did the past year," he said.

A recent poll from DTN asking if farmers have purchased fertilizer already for the 2023 growing season showed three-fourths of respondents had. You can read it here: https://www.dtnpf.com/…. 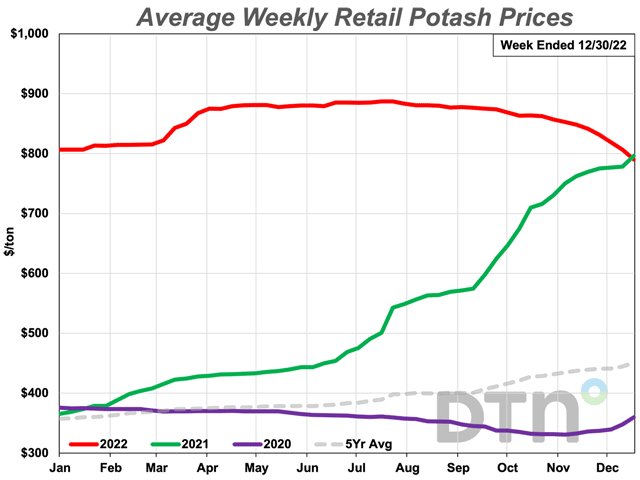