On Thursday, Dec. 8, National Sorghum Producers announced that Brant and Amy Peterson, who operate Winsome Farms in Johnson, Kansas, took top honor as this year's Bin Buster Award recipients, producing drought-denying sorghum with a yield of 245.80 bushels per acre (bpa). This was the Petersons' second year entering the contest and their first national title.

Last year, the Petersons took first place in Kansas for irrigated sorghum with an entry yielding 204.13 (bpa). While many first-timers might have been content with such a result, Brant Peterson couldn't help but look down the list of national winners and make an observation: Though his yield was nothing to sneeze at, had he yielded just 4 bpa more, the Petersons would have placed second nationally for irrigated sorghum.

"I was like, 'Holy Cow. Just four more bushels?' I can surely make four more bushels," he said in an exclusive interview with DTN. "So, this year, I swung a little harder at it and gave it a little more attention. It was a pretty rough year, so I was surprised when I got the call."

Organized by the National Sorghum Producers since 1985, the yield contest initially began as a means of increasing membership and educating producers on new management techniques, said Tim Lust, the organization's CEO.

"While those goals remain today, the yield contest has also become a way to identify and recruit leading producers in our industry, many of whom have served in leadership positions within our organization through committees and our board of directors," he said. "Sorghum is a staple in many farm rotations across the Plains and increasingly so in areas looking to add a crop to their rotation, address tough soil conditions, pest and disease problems and limited rainfall situations while increasing soil organic matter, capturing carbon, breaking up compaction and improving overall soil health."

Peterson, a 48-year-old, fifth-generation farmer, said that his family has grown sorghum for as long as he can remember. However, during the past decade or so, the crop's prominence within their 7,000-acre operation has changed.

"Sorghum was always kind of the redheaded stepchild that took a back seat to corn because of the basis, but you always knew the ground that wouldn't grow corn could grow sorghum," he said, noting that he grows grain, silage and food-grade sorghum. "After the drought of 2012, our water table out here took a big hit, so we were looking to transition away from as much corn and over to more sorghum. I could average 25-ton sorghum silage with just 5 to 9 inches of irrigation."

The High Plains of southwest Kansas offer unique conditions. The silt loam and sandy loam soils run deep -- as much as 10 feet deep in some places -- offering greater water-holding capacity than soils farther to the east. But that's not the "secret sauce," Peterson said.

"Our elevation is 3,300 feet, so while we may be 95 degrees (Fahrenheit) during the day in the summer, we'll be 68 at night," he explained. "We cool off, and that gives time for the crops to relax. They're not stressed all the time. With whatever winter moisture we get and a little pre-water, I can grow 70-bushel milo without another inch of rain."

Peterson admits to being hesitant about entering the contest because he didn't think he could compete. The to-do list on a farm is unending, and he felt his time should be spent on other pursuits.

"And honestly, I didn't think that we had any products that would get us there, but then Channel came out with 6B95," said Peterson, who also is a Channel dealer. "In test plots about 50 miles from me, it had yielded 200-bushel sorghum the previous two years. The folks running the trials encouraged me to put it on some good ground with water, so I thought maybe we actually can compete."

In 2021, Peterson planted his first contest plot with the new Channel variety at a population of 60,000. He said he didn't put a lot into his initial fertility program, but after catching a few timely rains and the crop looking good, he decided to fertigate with a little UAN32 at the boot stage. "I think that paid," he added.

While his 2021 contest plot was growing, so too was Peterson's involvement with Leadership Sorghum, a program sponsored by United Sorghum Checkoff that works to develop the next generation of leaders for the sorghum industry. His class of 12 included two previous national yield contest winners, and Peterson wasn't shy about asking questions.

"They were planting Pioneer, but still, at what population? 120,000? I planted 60,000; guess I need to bump up the population," Peterson said. "Those guys let me pick their brains, and after we finished where we did in the 2021 contest, we tweaked a few things for this year."

Peterson selected the same irrigated field, but he flip-flopped the areas where he planted his contest plot. With the price of nitrogen fertilizer sky high, he elected to spread 8 tons of manure on the field. He strip-tilled to prepare the seed bed, and then on June 1, he planted Channel 6B95 on 30-inch rows at populations varying from 90,000 to 120,000.

As was the case for wide swaths of the country during the growing season, drought found its way to Winsome Farms. The Petersons only have the ability to irrigate about one-eighth of their total acres, so much of their dryland corn, wheat and sorghum suffered in the dry heat. While overall the 2022 crop was well below average, the irrigated contest plot was a wellspring for agricultural optimism.

During the season, Mother Nature only provided about 5 inches of rain. Peterson was able to put on 10 more inches, which included his pre-plant irrigation. He said his weed-control program wasn't as effective as he would have liked, requiring him to hire a roguing crew to clean things up.

When the combine rolled through the plot on Halloween day, it sported a different head than what Peterson used in 2021.

"I felt like I had a better sorghum crop out there last year, but I wasn't able to get it all in the combine," he said. "So, I bought a corn head retrofitted with an ARRO conversion kit. It's fantastic."

Lust said that Peterson's 245.80 bpa yield is six times this year's national average. It's also one of the top 10 highest yields on record in the contest's nearly 40-year history.

"The results of the sorghum yield contest show just how resilient sorghum is. It truly is 'The Resource Conserving Crop,'" said the sorghum CEO. "The drought had devastating impacts. Water is and will continue to be an important issue, and it's years like 2022 that really show what sorghum is made of and why, rain or shine, it can thrive."

Peterson said participating in the contest has changed his perspective on what his yield goals for sorghum should be. Historically, he has grown corn on his better acres. However, when he combines the yield potential he's seeing from newer varieties, the lower overall cost of production and the growing demand for the crop, sorghum isn't automatically taking a backseat as it might have a generation ago.

"Sorghum's future is super exciting to me," Peterson said. "It checks a lot of boxes when it comes to folks' goals for sustainability, and it meets the needs of consumers. And I can grow great sorghum on accident. We've been doing it forever."

A complete list of national, state and county yield contest winners can be found here: https://sorghumgrowers.com/…. 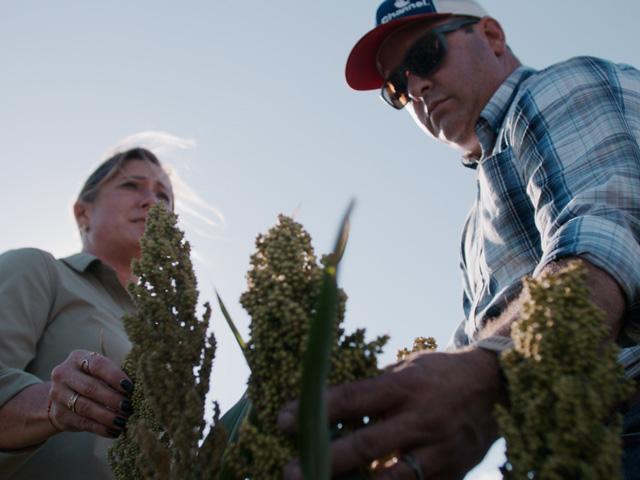