WASHINGTON (DTN) -- Rep. Glenn "GT" Thompson of Pennsylvania got the call Wednesday afternoon from a Republican steering committee that he would officially chair the House Agriculture Committee in the next Congress.

Thompson got the call during an interview with DTN. He stepped out briefly and staff gathered around him applauding when the call ended.

Just elected to his eighth term in Congress, Thompson has served as ranking member on the Agriculture Committee for the past two years. During that time, he visited more than 30 states talking and listening to others about challenges and needs in agriculture and rural America. He now will lead the committee with the GOP holding a slim majority and a chance to shape the next farm bill.

"The bottom line is we have to build on that we'll be adding a few staff, which we do when we go in the majority, especially in the farm bill year," Thompson said. "And continue that process of bringing voices to the farm bill. Part of that will hopefully be picking up the intensity of hearings, here in Washington, and actually kicking off some listening sessions around the country."

Thompson said his first listening session as chairman will likely come the first weekend in January during the Pennsylvania Farm Show.

"We need to hear those voices from throughout rural America and make sure that we're putting together a farm bill that really does a great job of basically restoring a robust rural economy, serving those hardworking families that provide us with food and fiber," Thompson said. "So, I'm looking forward to the honor and to the challenge."

Farm groups have raised concerns about the low reference prices with commodity programs, "title one programs," and the fall it would take from current prices for the safety net to kick in. The corn reference price is $3.70 a bushel and the soybean price is $8.40.

Thompson said the committee isn't in a position to make decisions on commodity prices at the moment, but he would like to find a way for farmers to avoid repeated ad-hoc disaster bills. "We really haven't had a robust discussion," he said. "You know, I've traveled around, but this needs to be a discussion that the entire committee -- the Republicans and Democrats -- are engaged in with the agriculture community."

Ad-hoc disaster aid for farmers this year is projected at about $11.9 billion, down from $19 billion in 2021. Pandemic aid passed by Congress in 2020 topped $23.5 billion, according to USDA. All that spending was outside of traditional farm programs.

Thompson said he would like to find a way that crop insurance supports farmers with those losses rather than relying on Congress to pass new aid programs. That would establish more reliability for both farmers and agricultural lenders, he said.

"Can we improve upon it (crop insurance) by looking at all that ad-hoc spending in terms of going toward disaster relief?" Thompson said. "So, ad-hoc spending, while it's appreciated, it's really kind of unreliable. It creates uncertainty. So, what can we learn that we may be able to make some improvements to the crop insurance and title one reference prices?"

Another dynamic that comes into play beyond commodity prices is input costs. Some farm groups have pitched the idea of a program for crops similar to the Dairy Margin Coverage, looking at the margin between prices and input costs.

"And so, farming is a business at the end of the day. What you're bringing in is the margin you're left with. And so, I think that that obviously needs to be a part of the discussion as we look at that in title one," Thompson said.

The first bills to get a hearing in the House Agriculture Committee next year will likely build on a bill Thompson introduced last summer, HR 8069, Reducing Farm Input Costs and Barriers to Domestic Production Act.

"There's a lot of things that can impact the agriculture supply chain," Thompson said.

The bill included provisions to allow low-interest loans for producers to adopt precision agricultural tools, as well as use the Environmental Quality Incentives Program (EQIP) for nutrient management practices. The bill also would require the Department of Interior to evaluate listing potash and phosphate as "critical minerals" that would offer support for more domestic production of fertilizer. Dealing with EPA delisting of pesticides, the bill would give up to five years to go through existing stocks of pesticides if EPA does delist them. The bill also adds protection to prevent glyphosate from being banned.

"Some of the other things in that bill included the Security Exchange Commission with what they want to do with tier-three emission requirements, which is kind of an unfunded mandate on farmers of all sizes," Thompson said. "Then the EPA, where they sidelined the number of -- first of all their scientists -- and then quite frankly, a number of crop protection tools, you know, that were absolutely critical for the yields of certain food and fiber. Those are the kinds of things in HR 8069, which was reducing barriers to farm inputs and domestic agricultural production."

While billions of dollars have been pumped into rural broadband programs at USDA and the Federal Communications Commission, Thompson said it has been done in piecemeal fashion. He pointed to the contrast with rural electrification in the 1930s.

"If it had been done in silos, the way we have done rural internet, my hometown would still be in the dark," Thompson said.

He credited working with current House Agriculture Committee Chairman David Scott, D-Ga., on a rural internet bill that never got a full vote on the House floor.

The $2.8 billion in climate-smart agriculture funding that came out of USDA back in September was a sticking point for Republicans in Congress who had cautioned Agriculture Secretary Tom Vilsack about using the Commodity Credit Corp. funds in that manner. Thompson said part of his criticism of USDA was the process involved in those decisions.

"The fact that they did this unilaterally, they never engaged with, with House Republicans anyways, at all; the only time I was engaged was about a 24-hour notice when there was going to be a press conference, announcing this program that I had no insight on," Thompson said. "And that's not how we do things in American agriculture. We've always worked together; Republicans and Democrats have always worked together. That's my goal."

Thompson added he wouldn't necessarily support the investments in climate-smart agriculture because he said that's not an area farmers were asking for help with over the past year.

"I think what I heard as these programs became public, and I heard this around the country as I traveled around, what I heard was that the American farmer needed, they needed some help dealing with this inflation," he said. "They needed help finding crop protection tools that were no longer available, because of some edict from the administration. They needed help finding affordable diesel fuel, and propane and fertilizer. You know, those were things that they were asking for."

Beyond trying to get a farm bill done in 2023, Thompson said he believes the Agriculture Committee "can walk and chew gum at the same time."

The committee will look at revisiting the Pesticide Registration Improvement Act, which he said is long overdue.

The Commodity Futures Trading Commission (CFTC) needs a reauthorization bill. The CFTC also right now is in the middle of a regulatory tug and pull over how digital currencies should be regulated after the collapse of FTX. Congress has concluded there likely won't be a bill in the lame-duck session.

"That doesn't fit into a farm bill, but it's important to the future economy of this country," Thompson said. "When you look at cryptocurrency, we need to put some guidelines around that industry. And for those tokens once are traded, and when it does, it falls into our jurisdiction. So, we have an awful lot of work to do."

-- Rep. Glenn "GT" Thompson, R-Pa., incoming chairman of the House Agriculture Committee, talks about the farm bill and some goals for 2023. Watch the DTN video: https://www.dtnpf.com/…

For more on the farm bill, carbon markets and agricultural insights, join us Dec. 12-13 for the DTN Ag Summit. https://www.dtnpf.com/… 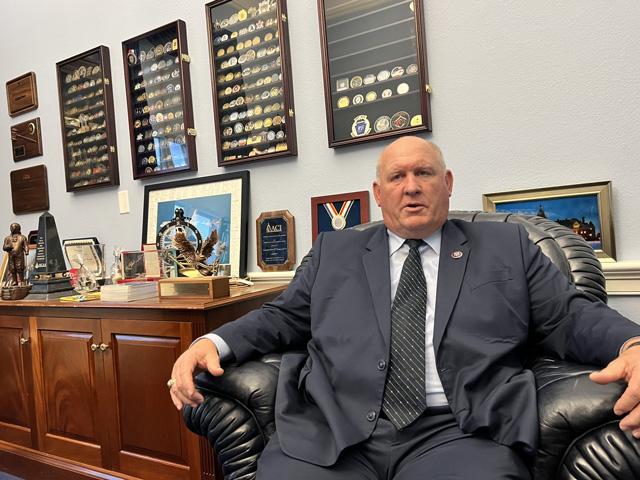