WASHINGTON (DTN) -- U.S. senators raised concerns Tuesday that countries such as China and Brazil are investing more heavily in agricultural research than the U.S. is, which could cause the U.S. to slip in innovative ways to boost farmer productivity.

As lawmakers ramp up for a new farm bill in 2023, the Senate Agriculture Committee held a hearing on farm bill programs related to research and areas where more work is needed.

"Demand for these farm bill programs continues to outpace the available resources, and yet, in recent years, funding for public agriculture research here in the U.S. has declined, which is concerning," said Sen. Debbie Stabenow, D-Mich., chairwoman of the committee. "Meanwhile, China has quintupled its investment in public agriculture research since 2000 and now invests twice as much as the U.S. does."

Sen. John Boozman, R-Ark., ranking member on the committee, pointed to the need to continue boosting agricultural productivity as the global population topped 8 billion people this year. Boozman also talked about the world stage with the impacts of Russia's war in Ukraine, as well as decisions made in smaller countries such as Sri Lanka, where the government tried to push farmers to "go organic" to disastrous results.

Chavonda Jacobs-Young, USDA undersecretary for Research, Education and Economics at USDA, said work by scientists at agencies such as the Agricultural Research Service (ARS) has "a long track record of making investments in research that translate into benefits for the overall economy," she said.

"I'm concerned about the level of investment," Jacobs-Young said. She added, "Imagine what we could accomplish if we were on par with Brazil and China."

However, like a lot of federal agencies, ARS workers are increasingly reaching retirement age, and Jacobs-Young expressed concern about the need to replace those workers with the next generation of scientists. "Our next generation of agricultural professionals is critical," she said.

Jacobs-Young also said USDA is looking for ways to improve technical assistance with producers, adding "boots on the ground," to take USDA research and make it applicable to farmers.

"The point of our research is not to stick in the file cabinets, but get it out to where people need it," Jacobs-Young said.

Research programs typically get a lot of praise, and everyone stresses their value until there is money involved. No program better defines that than the creation of the "Agriculture Advanced Research and Development Authority," (AGARDA) in the 2018 farm bill. AGARDA was created as a pilot program, but modeled after the high-tech military research agency, the Defense Advanced Research Projects Agency, (DARPA). Congress authorized using as much as $50 million a year on AGARDA, but last year, the project received its first $1 million.

Sen. Michael Bennet, D-Colo., pointed to the potential of "high-risk, high-reward" research that could come from AGARDA, but Jacobs-Young noted it is difficult to support an employee at USDA, let alone a new program, with short-term funding. Right now, USDA is still writing a plan for AGARDA to take back to Congress.

"We don't have the committed resources" to launch a program, Jacobs-Young said.

One research program that has grown is the Foundation for Food and Agriculture Research (FFAR), which started in the 2014 farm bill and was expanded with funds in the 2018 bill. Since then, FFAR has issued $185 million in grants for agricultural research that draws matching dollars.

Multiple senators also pointed to the value of precision agriculture and the need to increase research projects nationally to demonstrate the benefits of these tools to farmers. Sen. John Hoeven, R-N.D., talked about plans in his state to develop a fully automated research farm.

Sen. Cory Booker, D-N.J., also asked about research on farm concentration, as well as farm subsidies. He pointed out fruit and vegetable producers receive only about 2% of all subsidies. Booker said that's one reason a pack of Twinkies can be cheaper than fruit.

"We are not aligning our subsidies with the best interests of the consumers," Booker said, adding that the American diet also translates into high healthcare costs. "We are making incredibly cheap the food we are telling people not to eat."

Sen. Joni Ernst, D-Iowa, raised concerns about cybersecurity and the need to increase awareness in agriculture about it. Ernst also asked Jacobs-Young about what could be done to help farmers make the best decision about a carbon program.

"A lot of our farmers have expressed interest and want to be engaged about carbon capture. How can we get that information out to them?" Ernst said.

Sen. Tommy Tuberville, R-Ala., also asked what USDA is doing to study why foreign ownership of land continues to increase. Tuberville pointed to China going from 10,000 acres of ownership to 360,000 acres nationally, though a lot of that stemmed from Chinese purchases of Smithfield Foods and Syngenta. China still only accounts for about 1% of foreign-owned agricultural land, according to USDA.

"For some reason, we're selling more and more of our land to foreign entities," Tuberville said. "Are we doing more research into that?" He added, "We have foreign entities coming in. Bill Gates is the largest farmland owner in the country."

Much of the testimony and senator questions in the hearing focused on Jacobs-Young, but senators also had witnesses from land-grant universities

Katy Rainey, director of the Purdue University Soybean Center, was testifying for the American Seed Trade Association (ASTA) about public-led crop breeding research. She said one of the major needs in seed science is aligning the regulatory demands of USDA, EPA and the Food and Drug Administration.

"We need to make sure the regulatory environment and policies are in place to allow innovation to reach the field," Rainey said.

The only farmer who spoke on research was Steve Ela, an organic orchard farmer from Hotchkiss, Colorado, who was representing the National Sustainable Agriculture Coalition. Ela told senators that organic research needs more funding on the ways multiple beneficial insects can help organic production.

"We really just need to look at natural systems and learn from them," Ela said. Natural systems, he said, make it easier to "Let the farm work for me."

Deacue Fields, vice president of agriculture at the University of Arkansas, said land-grant universities right now are strapped when it comes to dealing with antiquated buildings and infrastructure. Nationally, land-grant universities are facing as much as $11.5 billion in deferred maintenance. Fields called for "bold moves" to revitalize the land-grant system.

"At every land-grant university, our research infrastructure has degraded," Fields said.

The full hearing and witness testimony can be viewed at https://www.agriculture.senate.gov/…. 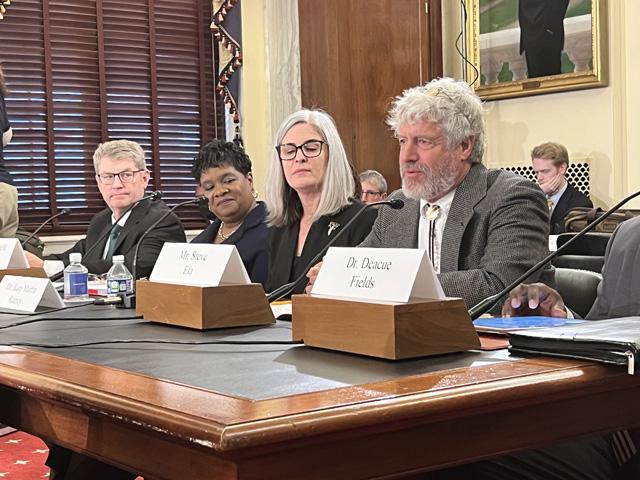