OMAHA (DTN) -- Retail fertilizer prices tracked by DTN for the first week of October 2022 show most fertilizers are lower than last month.

Six of the eight major fertilizers are slightly lower in price compared to a month ago, while the remaining two are a bit higher. DTN designates a significant move as anything 5% or more.

For the first time in five weeks, a fertilizer's price made a significant move. 10-34-0 was 6% less expensive than last month. The starter fertilizer had an average price of $813/ton.

Two fertilizers were slightly more expensive compared to last month. Urea had an average price of $826/ton and anhydrous $1,390/ton.

Fertilizer manufacturer Mosaic announced last week its North American phosphates business in Florida was negatively affected by Hurricane Ian, according to a press release from the company. Significant damage from flooding and high winds were seen throughout central Florida, and the storm did "modest damage" to their facilities and supporting infrastructure.

The company's early assessments find that phosphate production could be down by approximately 200,000 to 250,000 metric tons (mt), which will be split evenly in the third and fourth quarters of 2022. Repairs are expected to be completed over the next one to two weeks, according to the company.

In addition to production declines, the timing of shipments was also affected by the storm. Mosaic's phosphates sales volume in the third quarter is now expected to total 1.60 to 1.65 million metric tons (mmt), as port and rail closures delayed late third quarter shipments to October.

You can find the company's full press release here: https://investors.mosaicco.com/…

A new report from the University of Illinois Extension said retail fertilizers will continue to be higher for the 2023 growing season. You can read it here: https://www.dtnpf.com/…. 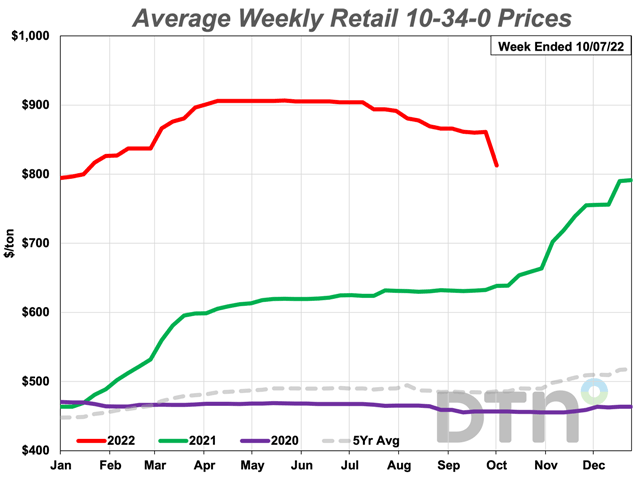