REGINA, Saskatchewan (DTN) -- While much of Canadian agriculture argues about a government plan to reduce fertilizer emissions, Derek and Tannis Axten have gone above and beyond in how they manage their soil, biology and nutrients.

"We live in a fragile soil zone. We understood we were giving up too much moisture in the way we farm," said Derek, who farms near Minton, Saskatchewan, less than 15 miles north of the Montana border.

"We don't grow any grains you load on a commodity train anywhere," Axten said.

With an aggressive composting strategy, cover crops and focus on lower-yielding, higher-value crops, Axten said he has reduced his reliance on commercial fertilizers by 75% from his peak use.

"We were surprised at the amount of nitrogen our soils can provide," Axten said. "You would be surprised what the soil can give you if you give it a chance."

Tannis Axten explained her work on composting materials and how getting the right carbon/nitrogen mix in the compost makes it work by heating it up to roughly 130 degrees Fahrenheit.

"The biology goes crazy, and it grows and moves, and that creates a lot of heat," she said. "We save the compost for the fields that really need it most." She added, "Having that living root and cover, that's where we find the most benefit to the soil."

So, what have the changes meant to the Axten farm? "This is fun now," Derek said.

While the shift in crop production by the Axtens has cut their commercial fertilizer needs, the Axtens are outside the norm for Saskatchewan and the Canadian prairie where farm groups are pushing back on a goal of Canada's government to reduce fertilizer emissions 30% by 2030.

DTN visited farmers in southern Saskatchewan this past week as part of the Canadian Farm Writers Federation annual meeting in Regina. With its extensive flat lands, Saskatchewan is considered Canada's breadbasket as the country's main source of grains and oilseeds.

The goal of reducing fertilizer emissions in Canada was first pitched in a government plan in later 2020, part of Prime Minister Justin Trudeau's commitment to achieve net-zero emissions across the Canadian economy by 2050. Trudeau's goal is similar to President Joe Biden's emission goals, which also include getting U.S. agriculture to net-zero emissions.

Nitrogen fertilizer leads to emission of nitrous oxide, which is 300 times more potent than carbon dioxide. That is why fertilizer emissions are increasingly a target by government officials.

Over the past year, farmers and provincial leaders in Saskatchewan, Manitoba and Alberta have become more vocal about the federal fertilizer plan and offered their own counter proposals and goals. The fear is that the emissions plan could become a hard cap on fertilizer use.

"They say that it's voluntary. How does that achieve the target? What if everyone says 'no?'" said Ian Boxall, president of the Agricultural Producers Association of Saskatchewan (APAS). "My understanding is this isn't a reduction of use, it's a reduction of emissions. My issue with that, though, is their modeling currently is based on sales. So, they are taking the sales to try to determine the emissions, and that isn't fair."

Nitrogen fertilizer sales have probably increased in recent years because of some strong production across the country, Boxall said. "But all that really matters is what is the increase in production to those pounds of nitrogen, right? So, I don't think they can necessarily strictly look at purchases to determine that we have excessive nitrous oxide emissions."

"So, there isn't one thing we can do to get lower to the number 30%," Boxall said. "The way we farm in Saskatchewan with zero till, there is a pretty sound science that we are a carbon sink in that we sequester more carbon than we produce due to the fact that we don't have a whole bunch of tillage."

NOT AT COST OF PRODUCTION

Saskatchewan Ag Minister David Marit told DTN the federal government's emission policy goes against the province's strategy to both increase production and grow exports. Marit said there should have been more discussion to look at new technologies and innovations, as well as conduct more research on the state and federal level.

"Why don't we put our efforts there and try to find ways we can improve the ag side from emission reduction but not impacting production?" Marit said. "Our biggest concern is we have to grow more food, not less food. To do that, it's going to take a concerted effort from everybody."

In July, the federal government and provinces signed the Sustainable Canadian Agricultural Partnership -- a five-year agreement -- that included language to lower overall agricultural emissions by 3 million to 5 million metric tons of carbon equivalent per year, starting next April. The partnership calls for lowering total emissions from fertilizer but included language that "the goal of lowering emissions from fertilizer production should not come at the expense of the viability of the agricultural sector." Yet the partnership also did mention continued consultations to achieve the country's goal to lower fertilizer emissions 30%.

Just this past week, a resolution was introduced in the Manitoba legislature calling for the federal government to abandon its fertilizer strategy.

Marit said he has pitched the idea to federal Ag Minister Marie-Claude Bibeau that the emission proposal should be based on production but was told the Trudeau government wants to see an emission reduction.

"Now they are kind of softening that language a little bit," Marit said. "They are saying we are trying to achieve up to a 30% reduction, and that wasn't what we heard before."

Marit also credited a September report from Fertilizer Canada stressing the 4Rs approach -- right source, right rate, right time, right place. Farm groups rallied behind the Fertilizer Canada report, which called the 30% plan an "aspirational goal," though the report cited that agriculture across the country could cut emissions 14% by 2030 using the 4Rs even with a "moderate" increase in nitrogen use.

While USDA rolled out $2.8 billion in grants last month under the Partnership for Climate-Smart Commodities, Canada has

"If it's going to take government dollars or tax dollars, is that the right business model to make sense and make it work," he said. "Once those dollars run out, is it really sustainable?"

Farmers around the world have watched the protest by Dutch farmers in the Netherlands against emission-reduction targets there.

"There would be an absolute revolt if that happened here," said Kevin Hursh, a farmer and a long-time columnist for Western Producer magazine. "I think the government may have tested the waters, and the pushback they got told them, 'We better tread carefully' because this is only about emissions. There is no plan to mandate fertilizer reduction, because there was a hell of a pushback."

Still, Hursh noted there is room for some practical regulatory changes. He pointed out, for instance, that Saskatchewan still allows farmers to apply fertilizer on frozen ground, a practice that has been banned in Manitoba.

"There's a place to start with emission reductions, and that's the stick approach because that regulation makes sense and other jurisdictions have that," Hursh said.

On the carrot side, Hursh said the government could help support the use of various nitrogen stabilizer products to test how much they help reduce emissions.

"To me, that's measurable and it benefits producers who get to use the fertilizer rather than it being emitted," Hursh said. "But right now, the price of those products stops people from doing that -- stops people from using it."

Hursh said more farmers fall in line with Marit and that emission goals need to factor in emissions per unit of crop or livestock production.

"There's definitely a push to say we should be talking about emissions per unit of production versus absolute emissions because, really, if we can increase our production but our emissions stay the same -- the world is growing and food's got to come from somewhere," he said.

One area where Canadian farmers are hit harder than their U.S. counterparts is the economywide carbon tax that is now $50 per metric ton. Starting in 2023, the tax will go up $15 a metric ton and is projected to go as high as $170 a metric ton by 2030. While agriculture has some exemptions on prices such as diesel fuel, Boxall said the tax can take as much as $15,000 off a farmer's bottom line.

"All of our freight -- rail freight -- everything we buy has a carbon tax cost," Boxall said. "So, it is a huge hit to your bottom line."

David Sauchyn, director of the Prairie Adaptation Research Collaborative (PARC) at the University of Regina, has led a research group modeling climate risks in Saskatchewan for nearly two decades.

Interviews with hundreds of agricultural producers by a researcher at PARC included a series of questions on climate change. About half of the producers interviewed do not accept the science around climate change, Sauchyn said.

"I give a lot of talks to ag producers, and I think I know where they are coming from, so it doesn't really bother me -- these various explanations as to why they don't find the science acceptable," Sauchyn said. "One of the most valid that I've heard is that they don't like the solutions that are being proposed, especially by the federal government -- the carbon tax for example. And I understand you're not going to acknowledge climate change if you don't like the solutions that are being proposed."

The impacts of climate change, though, have become a business imperative. Sauchyn said his group has gotten more requests from businesses to model out the risks and opportunities. In Saskatchewan, the modeling overall shows climate change is good for agriculture in the province. They live in a cold climate that is getting warmer.

"But there are certain things that producers have to do to take advantage of this warmer, longer growing season," Sauchyn said. "You can't just maintain the same practices and benefit from a warming climate. Also, even though it's getting warmer, a longer frost-free season and so on, the downside is in a warming climate, the weather events tend to be more extreme."

Derek and Tannis Axten talk about their farming operation in this video: https://www.dtnpf.com/…

Mark Hoimyr moves cattle on his operation near Gladmar, Saskatchewan, in this video: https://www.dtnpf.com/… 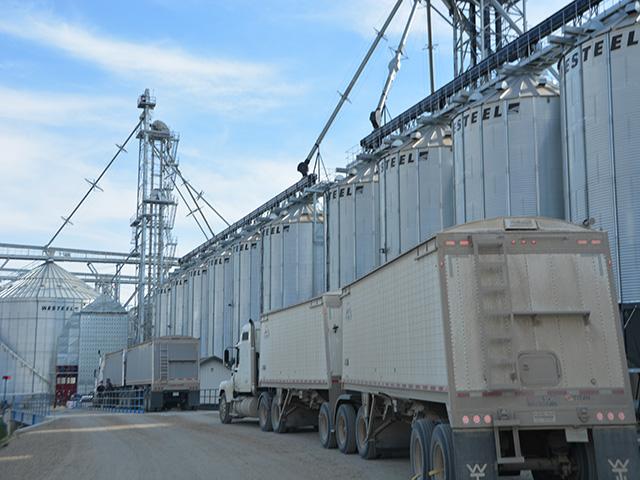