ANKENY, Iowa (DTN) -- Yield loss while combining soybeans is inevitable, according to Delbert Voight, Penn State Extension senior educator specializing in agronomy. But farmers can take steps to put more bushels in the bin and not on the ground.

Combining soybeans promptly and at the right moisture level, keeping up on equipment maintenance and making in-field harvest/combine adjustments as needed are just a few ways growers can reduce in-field losses as harvest shifts into high gear.

"Numerous tests of soybean combine losses show that up to 12% of the soybean crop is lost during harvest," Voight recently wrote in an article published by Penn State Extension. "Harvesting losses cannot be reduced to zero, but they can be reduced to about 5%. Combines can be operated to reduce losses without affecting the harvesting rate."

Voight said once 95% of soybean pods turn brown, it's usually time to combine a week later. He recommends farmers start harvesting soybeans at 15% moisture. Once soybeans dip below 13% moisture, a grower is essentially giving the mill soybean dry matter since they will correct the moisture to 13%.

The risk of shatter and yield loss also increases when soybeans are drier than 13%. Learn about the science of soybean shattering here:

Shawn Conley, University of Wisconsin-Madison soybean and small grains specialist, said looks could be deceiving this year when choosing soybean fields to harvest. Since many soybean fields were planted later than normal, he said many field have plants with green stems. That could deter farmers from harvesting those fields even though soybeans are mature, at the proper moisture (13% to 14%) and ready to come out.

"A farmer may drive by and say soybeans are still green, but the beans are at 10% (moisture). They need to go out and shell a few pods and check them," Conley said, noting the risk of shatter increases immensely when soybeans fall below 13% moisture.

Voight noted there are differences among soybean varieties when it comes to pod integrity, with some that don't split as much. "There are also impacts of erect varieties that might tend to dry quickly and delays in harvest may impact those, compared to varieties that tend to lay over and nestle protecting large fluctuations in dry down." he wrote.

During the first 12 days after soybeans mature, the average dry-down rate is 3.2% per day, according to Iowa State University research. Data also suggests about 12 days after pod maturation, 13% moisture was noted over the study period. You can read more about the Iowa State dry-down study at "How Fast do Soybeans Dry Down in the Field?".

-- Keep up with combine maintenance. Make sure knife sections, guards, wear plates and hold-down clips are in good condition and properly adjusted.

-- Reel axle should be 6 to 12 inches ahead of the cutter bar. Reel bats should leave beans just as they are cut. Reel depth should be just enough to control the beans.

-- A six-bat reel will give more uniform feeding than a four-bat reel.

-- Complete the harvest as quickly as possible after beans reach 15% moisture content.

-- A pick-up type reel with pick-up guards on the cutter bar is recommended when beans are lodged and tangled.

Conley also suggested farmers cut soybeans as low as possible and at an angle to prevent uneven wear on the sickles. 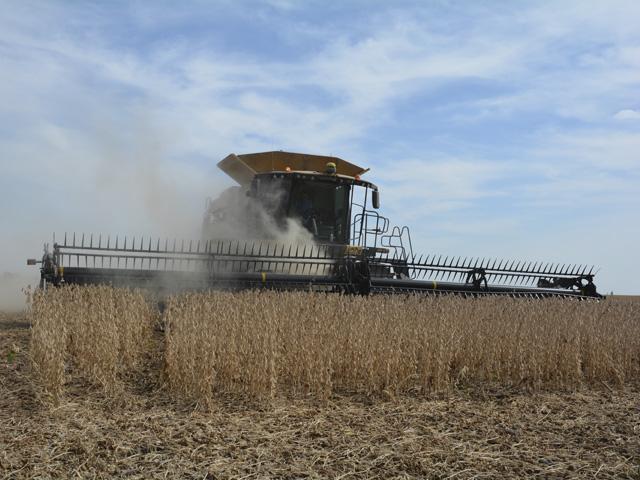