JEFFERSON CITY, Mo. (DTN) -- As other crops mature and dry down in September, soybeans -- especially late-planted or double-crop fields -- offer an attractive meal for stink bugs, so producers should remain vigilant with their scouting programs.

"Stink bugs are one of the few insects you do have to worry about at this time of year in soybeans," said Christian Krupke, field crops entomologist at Purdue University. "They have been trending upward in the last several years in terms of abundance and need for control."

Several native and invasive species of stink bugs can become agronomic pests in corn and soybeans. These include the green stink bug, the brown stink bug and the brown marmorated stink bug. Recognized by their distinctive shield-shaped bodies, stink bugs feed on individual soybean seeds by piercing the pod and sucking out the seed matter, leaving behind flattened pods.

"When the stink bug damage leads to wrinkling, shriveling and discoloration of the seeds, there's a potential to get docked if the rate of damage is high enough," he said.

While neither Krupke nor Seiter had received reports of stink bug infestations reaching economic thresholds in 2022 yet, both agreed that producers should continue to maintain their soybean scouting programs through the R6 growth stage to avoid any late-season surprises.

"One of the things we've combatted in the past is the misconception that if you treated with an insecticide at R3, which many do, you'll cover the stink bugs at R5 and R6," Krupke said. "But that's not the case. You don't have any protection that lasts that long. The stink bugs we're finding now often have moved into the crop from other plants."

Seiter recommended scouting for stink bugs using either a sweep net or a drop cloth. The economic threshold is nine stink bugs per 25 sweeps with a net or one stink bug per linear row foot on the cloth. Should this threshold be met, an insecticide application is warranted.

When selecting an insecticide to treat late-season stink bugs, both entomologists said that producers must be mindful of the pre-harvest intervals for any insecticides they apply.

"There are many registered insecticides for stink-bug control," Krupke said. "You just need to ensure that you have enough time between when you treat and when you have to harvest."

While September scouting in soybean fields may feel like wasted effort, milder winters in recent years have allowed more stink bugs to overwinter, allowing populations to increase across the Midwest.

"We have been seeing higher stink bug populations in general this year," Seiter said. "It can be an issue for us this time of year and particularly in soybeans. This is certainly the time to be looking." 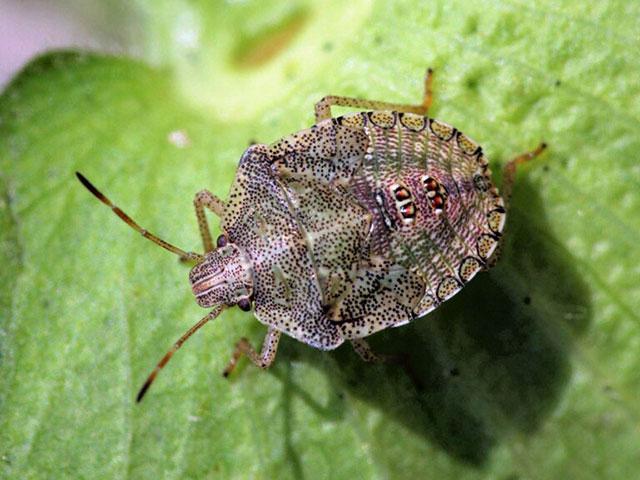