MT. JULIET, Tenn. (DTN) -- It's been a far from a perfect growing season, and rather than a singular national storyline, each region is dealing with its own ailments.

"There have been so many weather concerns this year, but it hasn't been a consistent situation for many places," DTN Ag Meteorologist John Baranick said. "Some areas have seen really good conditions go south, while others that started poorly have made up some ground. Some have waffled in-and-out of poor and good conditions."

DTN will take a detailed look at growing conditions and yield potential for corn and soybeans in 10 states Aug. 8-12 as part of the 2022 DTN Digital Yield Tour, Powered by Gro Intelligence. Based on Gro's yield forecasting models and combined with on-the-ground assessments from farmers, this virtual tour aims to provide a clearer picture of production at the national and state levels.

Unlike years past, the tour will start with the big picture, releasing national corn and soybean yield estimates on Monday, August 8. From there, the tour will take detailed looks at growing conditions in Ohio, Indiana and Illinois on Tuesday; Iowa, Nebraska and Wisconsin on Wednesday; Kansas and Missouri on Thursday; and South Dakota and Minnesota on Friday.

DTN will publish a news article midafternoon each day during the tour as well as links to Gro's yield models, which are usually only available to Gro subscribers.

You can also contribute to the Digital Yield Tour by using the hashtag #dtnyieldtour22 on Twitter and find a collection of our ongoing coverage here: https://spotlights.dtnpf.com/… .

DTN lead analyst Todd Hultman said that unlike traditional crop tours, which drive around the country pulling random samples from fields, Gro Intelligence's models encompass data from every county in the Corn Belt and rely on more than simple averages and statistical extrapolations to generate estimates.

"USDA does not do field observations in August. They're also looking at satellite data, so it wouldn't surprise me if Gro comes out with a fairly close rendition of what USDA is looking at," Hultman said. USDA's National Agricultural Statistics Service will release its first yield forecast on Friday, August 12 at 11 a.m. CT.

Gro Intelligence senior analyst Will Osnato said both the corn and soybean yield models are trending lower than last year.

Spring started off cold and wet everywhere except the Central and Southern Plains. There, planting was closer to a normal pace, but limited moisture has led to decreasing crop conditions, Baranick said. It was slow going in the rest of the Corn Belt, and most places finished planting in late May or early June.

"With everyone planting together in a narrow timeframe, much of the country's crop is in similar development stages, and extreme weather events have or will have larger effects on crops this year. The risk is not spread out as much," Baranick said.

"Unfortunately, this summer has also been hot and dry at times. Flash drought has popped up from South Dakota to Ohio and some of the other major corn and soybean states this crop tour doesn't cover. At times, those areas have benefited from increased rainfall, and other times they have not. Conditions have been quite variable, and I suspect even in some of the over-performing states there will be pockets that don't fit that narrative. The flip-side is also true, whereby states with poorer projected yields will have sections in them that look really good."

South Dakota farmer and vice president of the American Farm Bureau Federation Scott VanderWal shares some shared of his early thoughts in an exclusive interview with DTN here: https://www.dtnpf.com/…

Osnato said the corn and soybean yield models are reading recent high temperatures negatively, adding that average land surface temperatures across main corn growing regions were among the highest on record in parts of June and July.

Other factors, like USDA's crop conditions and below-average NDVI values, also contribute yield forecasts below 2021. The normalized difference vegetation index, or NDVI, measures the color of a crop from satellites and compares it to a 10-year average at the same date. Generally, a greener map reflects a healthier crop.

Gro Intelligence senior analyst Jon Haines said there are 23 years of NDVI data, and for corn, this year ranks as number 17. "We're definitely near the bottom for NDVI at this point of year, and that's partly due to the delay in planting."

Haines said he's watching to see if NDVI rebounds, which would reflect crop development catching up to what it usually is this time of year. "It's starting to look like that's not necessarily the case, and we're just not going to peak at the levels we would expect. The temperatures are definitely keeping that concern alive."

Hultman said he's hearing similar concerns from farmers, adding that there appears to be another east vs. west divide in crop conditions. He heard from an eastern Nebraska farmer that the corn crop looks good now, but if there isn't moisture or a break in the heat, the situation will be very different by mid to late August.

Many of the farmers he's visited with don't feel like their soybeans got a good start this year. "It was cold and wet, and they sat in the ground. They're just not excited about the start that soybeans got."

Haines said beans' rough start is also reflecting in Gro's models. "But with that said, there's still a lot of weather ahead of us," he said, adding that the soybean yield model's accuracy grows through the month of August as it incorporates more rainfall and temperature data.

"Lots of times, farmers have told me that if you get rain at pollination, you're set. Corn will do fine," he said. "But I think in 2020, it really showed us that if you hit a dry spell in August, it will really tax your yields. Overall, we have a dry and hot forecast ahead. It's just that the eastern section of the country looks a little better. There's still yield risk in the home stretch, is how I'm seeing it."

If you'd like to share your crop observations with the DTN team, please email them to katie.dehlinger@dtn.com 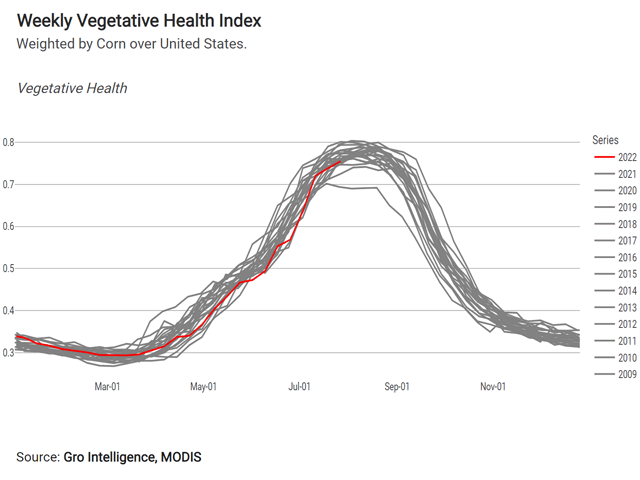