JOHNSTON, Iowa (DTN) -- Farmers have a love-hate relationship with nitrogen. It's an important corn nutrient needed to achieve big yields, but it's also a leaky fertilizer that can pollute water.

Corteva Agriscience announced July 14 the formation of a new Nutrient Maximizer Team to help educate farmers and others about the value of using nitrogen stabilizers to keep more applied nitrogen in fields and out of waterways. The announcement was made during the company's Summer Media Day in Johnston, Iowa.

"Now is the perfect time (to form the team) because of high commodity and fertilizer prices, and with environmental conversations heating up," said Brittany Loewen, nutrient maximizer sales leader. "I think it's (retaining fertilizer) on everyone's radar. It's a really exciting time for us to say, 'Hey, we have a solution.' We're really proud to be able to deliver that to the American farmer."

Corteva Agriscience in-ground nitrogen stabilizer products include N-Serve, which works with anhydrous ammonia to inhibit nitrification to keep the nutrient in the root zone longer and reduce leaching, and Instinct NXTGEN, which does the same thing for urea, UAN and liquid manure. It also sells PinnitMax TG, an above-ground stabilizer designed to prevent volatilization of urea and UAN applications for up to 14 days.

Many other companies also offer nitrogen stabilizers, such as AGROTAIN and CENTURO from Koch Agronomic Services and Trident from Verdesian.

Corteva Agriscience claims N-Serve and Instinct NXTGEN extend N availability in the soil by six to eight weeks (compared to if a stabilizer is not used), so it's available when corn needs it the most during critical growth stages. The company also advertises both stabilizers reduce leaching by 16%. Yet, N stabilizers are used on less than 40% of corn acres nationwide, according to Corteva Agriscience estimates.

GOOD FOR THE ENVIRONMENT

Mike Koenigs, a Nutrient Maximizer Team member and development specialist, attributes the relatively low usage rate of N stabilizers to the low cost of N in the past and farmers thinking they're not needed, especially if N is applied in the spring. He and seven other team members will work with ag retailers to spread the message to farmers that using an N stabilizer with fall or spring N applications is not only a smart choice economically but good for the environment.

"The economic piece of this has never been as strong as it is right now when you look at the price of nitrogen fertilizer and the price of corn today," Koenigs said. "And the environmental factor is not going away. We have to do everything we can to keep our applied nitrogen in the root zone for our crops and keep it out of our waterways."

December corn topped $6 per bushel on July 15, while the DTN National Cash Index neared $7 per bushel.

Koenigs said it's not uncommon for farmers to apply 200 pounds of N per acre or more on corn-following-corn in high-yielding environments. If a farmer spends $200 or more per acre for N, he said, spending $12 to $15 per acre on an N stabilizer product is cheap insurance.

"The cost of N has doubled in the past year. To replace lost nitrogen is expensive," Koenigs continued.

In April, North Dakota State University published a comprehensive report on nitrogen extenders and additives for field crops. Find it at https://www.ndsu.edu/….

Additional information on common nitrogen fertilizers and stabilizers for corn production from Pioneer can be found at https://www.pioneer.com/…. 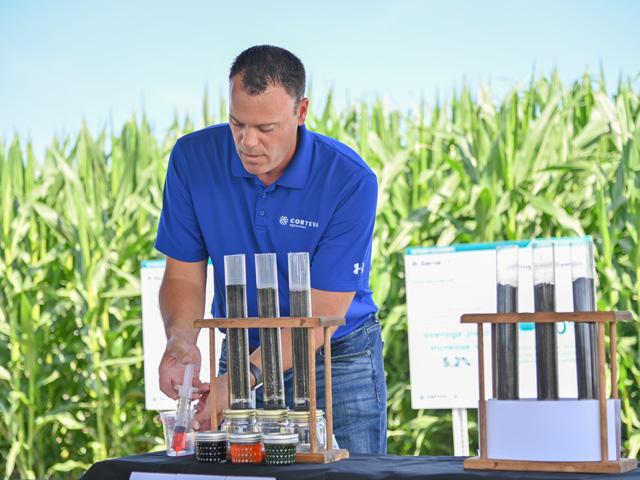