OMAHA (DTN) -- Planting came late this year for Wahpeton, North Dakota, farmer Chris Johnson, but he estimates he ended up unable to get seed into the ground on only about 4% of his land.

Johnson was in a sprayer Tuesday side-dressing some cornfields. His crop on southeastern North Dakota and western Minnesota acres also got a rain shower Monday night, ranging from 1/4- to 3/4-quarter inches, after a weekend of 100 F heat and high winds.

"It was a very nice shower for the crop to take in," Johnson said.

Johnson finished planting soybeans on June 10, the final planting date for soybeans in Minnesota and eastern parts of North Dakota. He said about 4% of his total acres ended up unable to plant, which includes about 100 acres in Wilkin County, Minnesota, that were still underwater in early June. "It didn't get any better, let's just say that."

Johnson added, "Four percent is not too terribly bad, but it's still 4% with the corn and soybean market, and wheat market, as good as it is now."

As market analysts ramp up forecasts for the June 30 acreage report, planted acreage in the Northern Plains may come in stronger than anticipated even a month ago. The acreage report doesn't spell out exactly how many acres will be deemed prevented planting but will detail how closely planted acres align with the last couple of years.

After a tough planting season delayed by a late snowstorm, crop acreage in North Dakota and surrounding states is starting to look better than anticipated last month when analysts were forecasting high amounts of prevented-planting acres in the Northern Plains.

As of last week, North Dakota had gotten 90% of last year's corn acreage planted, or just under 3.4 million acres. Emergence, though, is lagging. Tuesday's Crop Progress report showed as of June 19, only about 68% of North Dakota's corn crop had emerged.

Soybean acreage in North Dakota and Minnesota is coming in closer to normal, according to the Crop Progress report. North Dakota had about 92% of last year's acreage planted, which breaks down to about 6.2 million acres planted.

While Johnson will end up with fewer prevented planting acres than 2019, he said this year caused more stress because of the prolonged uncertainty over whether he would be able to get into the fields as they slowly dried.

"It was definitely more stressful than '19 because in '19, there was no decision. It was wet," Johnson said. "This year, we struggled."

With his corn behind schedule, Johnson said his crop is about "boot high" though he was noting a neighbor's field was just about two to three inches tall. Some of Johnson's soybeans are just coming out of the ground.

"The wheat is as tall as it should have been six weeks ago. So we'll see how it turns out. That could be interesting in itself because wheat doesn't like hot weather at the wrong time."

Liz Stahl, a University of Minnesota Extension educator in crops out of Worthington, in the southwest part of the state, said there was a lot of concern in her area about possibly higher levels of prevented planting.

"Things weren't looking good for a while, but fortunately most people had windows they were able to get things planted -- some very long-hour days, although the dates were later than usual," Stahl said.

There were planting windows in Minnesota to get corn in before it got too far into June, but there may be higher levels of prevented-planting acres in west-central Minnesota and potentially in northwest Minnesota as well.

While planting started late, Stahl said she doesn't think it will have much of an impact on yield potential because the year started out cooler. Stahl added, "For all of the concern about PP earlier this year, where I live we actually could use some moisture again -- we're in an abnormally dry spot in Minnesota. The heat has turned on too, so hopefully the rain won't shut off like it did last year at this time."

"Fields that had drain tile underneath them, those we were able to plant in a halfway decent timely manner," Johnson said. "But those fields where we didn't have tiling, we struggled."

A lot of farmers in Johnson's area also pulled out their rotary hoes because of crust that formed on the fields that made it difficult for both corn and wheat to break through the surface, Johnson said.

"We had to do some rotary hoe work," he said. "In my local area, there were at least a dozen farmers that were rotary hoeing. So not only did we struggle to get it planted, we struggled to get it up."

In central South Dakota, farmer and DTN Contributing Analyst Tregg Cronin said there will be zero prevented planting in his area. All of the intended acres were planted, although some acreage may have been shifted as the calendar got deeper into May. Cronin said there were more prevented-planting acres in parts of northeastern South Dakota. "I don't think the PP acres will be as bad as originally thought in May as the weather turned drier in June and there was simply too much incentive to plant something/anything to leave them fallow."

After the final planting date, farmers have 25 days of insured late planting in which the coverage level drops 1% each day.

For farmers who could not get a cash crop in the ground, the Risk Management Agency last year adjusted the rules for cover crops to allow them to be hayed, grazed or cut for silage at any time. Farmers can make those cover crop moves without affecting their prevented-planting indemnity payment.

"The federal rules are allowing you to plant a cover crop and harvest it with hay silage or grazing without a penalty, so there are some opportunities for people who have livestock," Johnson said.

"I have seen more sunflowers in my area than I've seen in a long time," Johnson said. "I just talked to one of my friends and they haven't planted sunflowers since 1996."

For farmers who applied fall nitrogen but could not get corn planted in a timely fashion, Johnson said sunflowers can be planted later than corn and it has a deep tap root that can get at that nitrogen.

"For the people that had fall fertilizer on, that's what they utilize because we feel it was too late to plant corn," he said, adding North Dakota farmers don't have access to the shorter season corn varieties. "We can plant them (sunflower) later and they respond to the fertilizer."

Cronin also noted seeing more sunflower acres than normal in his area, but he attributed that to last year's drought as well. There was a tremendous amount of carryover nitrogen as yield goals weren't achieved in 2021. If farmers had elected to plant soybeans instead of a crop such as corn or sunflowers, then that "free" nitrogen would have been wasted on soybeans.

The war in Ukraine also has driven up prices for sunflower because Ukraine had been responsible for roughly half of global exports of sunflower oil. New-crop contracts are at record highs at 35 cents a pound plus oil premiums.

"Sunflower prices are record high on both ends of the curve," Cronin noted. " Old crop can be sold at 45 cents (per pound) plus oil into crush plants FOB farm. Bird food is probably a penny better than that without oil premium."

Cronin added, "With sunflowers preferring a little drier climate, the growing season so far has been very good with lots of potential on the table." 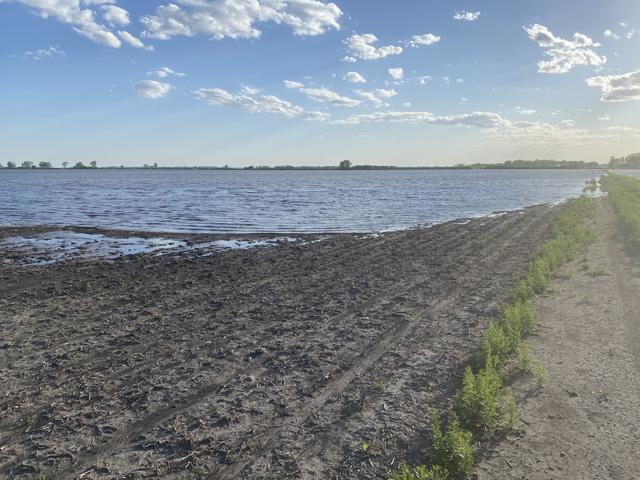