Recently on Twitter I have seen some talk about John Deere ending production of the moldboard plow. This would be historical news as John Deere himself founded the company on building a plow that was self-scouring which prevented the sticky soils from hanging up on the plow.

For more than 150 years, the plow was featured in the company's implement line-up. With many farmers utilizing no-till or minimum tillage in their farming operations today, the demand for new moldboard plows is probably low, thus the reason for no longer manufacturing of the implement.

My colleague, Dan Miller, recently talked to Deere directly and found the real story is they are ending production of the model 3710 moldboard plow. Deere is, however, still producing the 995 reversible moldboard plow (https://www.dtnpf.com/…).

I will admit the heydays of plowing was well before my time. My dad and uncle had a couple old plows that belonged to my grandpa, but by the 1980s, they rarely used them.

About the only time I even remember my dad plowing was when he rotating a field of old alfalfa back to corn/soybean production. There were a couple times I can remember -- I was probably a teenager -- when he and I would plow with both the John Deere 4020 and 4010 tractors and a couple old John Deere plows.

I'm not even sure what model number those old plows where. One was a three-bottom and the other was a four-bottom plow. My Dad thought one, if not both, of them where model 55 plows.

I found some photos of the John Deere model 55 plow online and they must have been this model as they looked very similar. They had spoked rims I remember, but that is about all I remember about them. They now reside at my uncle's farm in central Iowa.

My dad and uncle bought a semi-integrated model F145 John Deere plow in probably the late 1980s. We still have this plow and a three-point International plow.

The International plow was actually used just this past spring. Dad will take the old plow out and plow up the edges of the fields to keep the grass from growing too far into the fields every few years.

My Dad's childhood was in the 1950s/1960s -- during the height of moldboard plowing. My grandpa would plow all his fields, then come back and disk the fields and then finally plant the fields.

I ended up with some photos which my grandma had taken during her children's childhood, mainly from the 1950s. Among the photos is one from spring 1951

While the photo cut off the D's plow and the M's plow can't be seen because the B is in front of it, you can clearly see the plow of the B. It might be one of those Model 55 plows I used to help my dad plow alfalfa with in the late 1980s.

When we repainted the John Deere 620 (my grandpa's last tractor) over 20 years ago now, we had to replace the frame of the seat as it was very bent and always leaned to one side. I asked my Dad why the frame was so bad.

One of the plows they used had a trip mechanism with a rope, which was tied to the seat of the 620. The plow would trip occasionally, and this rope would then jerk backward, which was not good for the seat, much to the chagrin of my uncle.

We didn't really replace much on the 620 at that time, but we did replace the leaning seat. It wasn't a full restoration as we still use the tractor, but the tractor's days of plowing are over.

I'm curious to hear our readers stories about plows. If you have any memories, email them to me and we will run them in future columns. 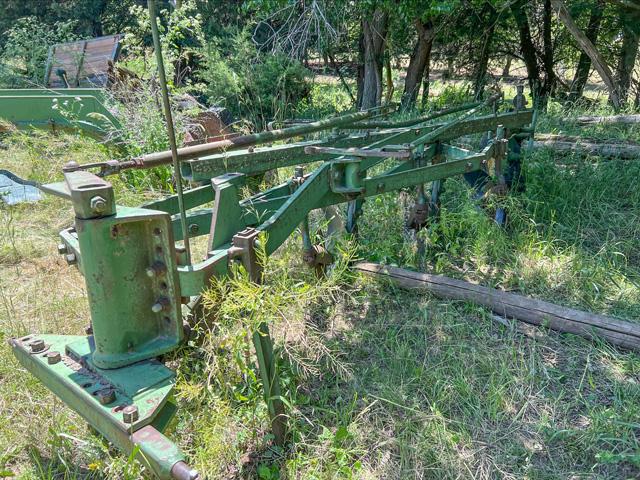