With May rapidly slipping away, and corn seed still sitting in the planter, "Last week, we basically made the decision to just close our eyes and go," northwest Ohio farmer Genny Haun said. This spring was giving her family painful flashbacks to the 2019 season, which left them with 80% of their crop unplanted and involuntary shudders when they hear the phrase: "Don't worry, we always get the crop in!"

As a result, Haun said they don't regret pushing the planting envelope in their fields this year -- or switching a sizeable chunk of corn acres to soybeans. "Even with all the headaches that come with it, we are still further ahead with crop insurance to have seed in the ground versus prevent plant," she said.

Haun's chaotic, wet slog through the planting season was a common theme among DTN Farm Advisers, who reported back via email and phone on their farming and ranching operations this month. With the exception of Western growers, most reported playing a rushed game of catch-up with planting so far in June, while navigating crop switches and delayed fertilizer and herbicide passes.

A RAINY MONTH -- AND ITS CONSEQUENCES

It's been on the wet side in south-central Minnesota, but with the memory of last year's drought fresh in his mind, Mark Nowak isn't complaining. "Combined rain in our area for April and May totaled around 8 inches," he said. "That is 20% above normal. So, our super-dry soils going into the spring are now fully recharged."

Fellow Minnesotan Justin Honebrink, who farms in the west-central part of the state, also battled wet weather and crossed the planting finish line late. "It is a little weird to see the crops just now coming up and not at the stage you would expect them to be," he said.

In north-central Missouri, wet springs are becoming "a permanent fixture" for farmer Kyle Samp, and ponds were pretty full in Bob Birdsell's northwest corner of the state, as well. In central Ohio, Keith Peters found himself in a race to beat overgrown rye cover crops on some of his fields, and get all his corn in. He broke some of his own rules, but he made it.

"I never work on Sundays, but I planted corn on (May 5)," he confessed. He has 400 acres of soybeans to go, and soils are still a little wet. "We sure are late around here," he said.

No one is more surprised to be in the "too wet" column this month than Mike Lass, who farms and ranches in the Llano Estacado, in the Texas Panhandle. After months of persistent drought, blowing dirt and fire threats, the skies dropped 7 to 9 inches of rain on his operation last week. "We went from extremely dry to too wet to go!" he marveled. "In my area we've had nearly half of our annual precipitation in a few days."

A welcome inch and a half of rain fell in the far western panhandle of Oklahoma, too -- enough to green up pastures, but much too late to save wheat, noted Kenneth Rose. The area remains deeply in drought, but his recently planted milo -- and soul -- appreciated the drink.

Farther north, drought eased slightly in east-central Nebraska where Ashley Andersen farms, but more rain is needed. "Two weeks from now they are forecasting it to be about 100 degrees (Fahrenheit)," Andersen fretted. "We will need some rain then for sure." Nearby, in northeastern Nebraska, Reinke has missed many of the biggest drought-busting rains and he has the thin, uneven wheat stands to show for it. "I'm hoping seed size and tillers make up for it," he said.

Farmers in Minnesota, Michigan, Illinois and Nebraska reported having wrapped up corn and soybean planting, although later than hoped.

Most agreed that the abundant moisture that delayed them has led to some pretty good-looking corn stands, despite the developmental delays. "The start to the crop is slow but progressing nicely," said east-central Illinois farmer Reid Thompson. Corn stands look uniform and healthy in southeastern Michigan, too, noted Raymond Simpkins.

But many DTN Farm Advisers elsewhere were still pushing to finish soybeans. Missouri's Samp had about 30% of his acres to go and was expecting replant on top of that. Birdsell is likewise stalled on soybeans. "We still have most left to plant," he said. "I didn't want to mud it in, but it looks like we're going to have to."

The recent deluge on his droughty fields has stalled Lass' planting in Texas, but the ever-optimistic desert farmer isn't complaining. "I'll just switch the acres that I don't get planted to cotton to grain sorghum or haygrazer -- it's all good!" he said. "The cows are happy campers."

Lass' acreage shifts were a common theme. The late spring shaved off about 5% of Samp's corn acres, which he will switch to soybeans. Likewise, Ohio's Haun has been forced to switch 11% of their total acres from corn to soybeans.

Other acreage switches were less weather-driven. "I did see a couple of guys putting anhydrous down on corn stubble," noted Minnesota's Nowak. "So, I assume the $7 new-crop corn bid enticed a few to go more corn."

But skyrocketing fertilizer costs have some shying away from the nitrogen-hungry corn in Michigan, Simpkins said. "I had one seed customer switch 200 acres from corn to beans," he said. "Not because of the late season but due to the cost of nitrogen."

With the sudden rain in the Texas Panhandle, Lass missed some of his post-plant residual herbicide applications, and the weeds are loving the newfound moisture. "Could get interesting fast!" he admitted.

The Andersens are a little behind on post spraying but confident they can catch up, although "wind has not been our friend here in northeast Nebraska," she noted. "It's been blowing for what seems like a month."

In Minnesota, Nowak is hurtling toward a June 12 deadline in his state for spraying dicamba, and recent high winds have plagued him, as well. "That is only (five) days away," he noted. "Many soybean fields are just emerging up to row. So, I'm not sure if there will be much benefit to spraying just because of the deadline. We will then have to go to an alternate chemical."

In Ohio, Haun's operation is still cleaning up weed issues from widespread prevent plant in 2019, but a new sprayer added to the fleet this winter will help. "We can cover twice as many acres when it's go time," she said.

To see what the DTN Farm Advisers were up to a year ago at this time, see last year's DTN Field Roundup from June here: https://www.dtnpf.com/…. 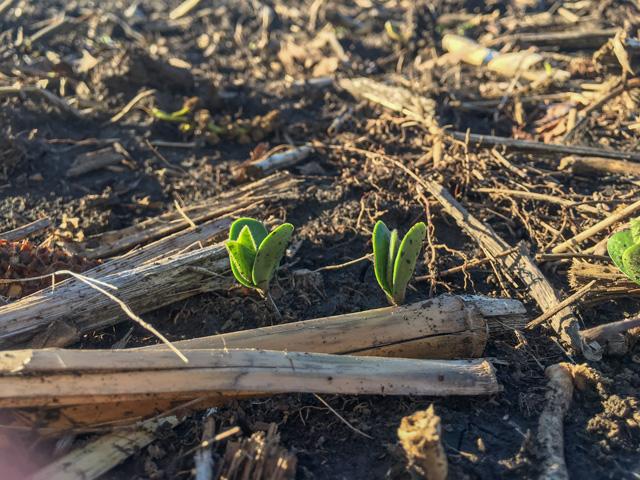