Storms chased the East Grand Forks, Minnesota, farmer out of the field late last week. He still had 300 acres of his 2022 corn crop left to plant. With the week hurtling toward June 1, he made the call.

"With all the rain and the forecast, we don't think we'll be rolling a wheel here until June 3, so we just pulled the plug on corn," he said. Krueger will pivot those acres to sunflowers, which can tolerate a later planting and -- like most commodities -- have a strong price point right now.

Many others in his region are pivoting to soybeans, and very few are considering leaving acres empty, he said.

"I think if prices were lower, there would be prevent plant all over the place up here," he noted. "But right now, I think guys will put anything in. To me, the market is very clearly saying: 'Plant a crop! Get it in the ground.'"

Many farmers in the upper Midwest had to make similar calls this week, as cold, wet weather pushed them toward the final planting date for full crop insurance for corn, which ranges from May 25 to May 31 in the Dakotas and Minnesota. (See a recent DTN story on lawmakers from these states calling for USDA to extend these final planting dates this year here: https://www.dtnpf.com/….)

It was a soggy weekend where Cody Wahlstrom serves as an agriculturalist in west-central Minnesota for the Minn-Dak Farmers Cooperative, he confirmed. Rain totals ranged from 3/4-inch up to 5 1/2 inches. "I'd say a majority of the area received in the range of 1.5 inches to 2.5 inches," he said.

"Monday, May 30, was the big severe weather day as the system that had been bringing showers and storms to the region all weekend finally wrapped up in a big system," explained DTN Ag Meteorologist John Baranick. "Streaks of severe storm clusters went through eastern South Dakota, Minnesota and Iowa, along with moderate to heavy rain." (For more on weather's impact on planting, as well as the forecast for the next few weeks, see https://www.dtnpf.com/….)

For growers in parts of North Dakota and northwest Minnesota, the rainy holiday weekend was the latest in a series of planting delays from wet, cold conditions this month. But for others in South Dakota and the rest of Minnesota, it followed a week of favorable weather that helped farmers push hard and catch up, as Krueger noted.

"We made some serious headway last week," he said. USDA's Crop Progress report for May 30 showed a 22% jump in corn planting progress for Minnesota farmers from the previous week, up to 82% complete. In North Dakota, farmers saw a 36% jump, to 56% complete, with South Dakota farmers moving 24% ahead to 86% complete.

WHEN WILL SOILS BE FIT?

Wahlstrom also reported big jumps in planted acreage prior to the weekend precipitation. "Our sugar co-op is about 90% planted. We were only about 40% planted at the beginning of last week," he said, on June 1.

Still, he also noted that the acres left to plant were mostly too wet before the latest rainfall. "So, it's anyone's guess on when those operations will see the field again," Wahlstrom said.

"With rain being recent, no field information is readily available on replants or total extent of damage or drown out from the rain," he said. He expected some acres that missed the corn insurance date to move toward soybeans or possibly take prevented plant provisions.

A fair amount of acreage in his area is drain tiled, which helps significantly with excess moisture where average rainfall amounts fell. "But part of the issue that lagging operations are having is frost is still pushing moisture up," Wahlstrom said.

Earlier in the year, he thought a late spring would benefit because frost would be over and done, but that has not been the case. "Roads and fields are busting up/becoming wet as frost makes its final push out of the ground," he explained. "One thing in our favor with the wet weekend is we do have some cooler temps through the week for a drying period that will hopefully minimize crusting issues, because rainfall came hard and fast." 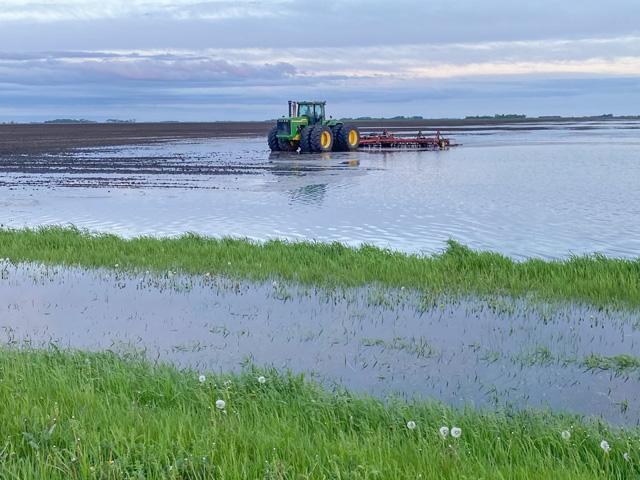