ROCKVILLE, Md. (DTN) -- Raymond Simpkins would like to file a missing season report.

Spring, last seen in April of 2021, has not shown up to its usual appointment where he farms in southeast Michigan.

"The weather here is more like February: freezing nights and highs in the 40s," Simpkins lamented. "We have had one day above 70 degrees in April."

Simpkins' plight was echoed by many of his fellow DTN Farm Advisers, a group of trusted farmers and ranchers who respond to monthly polls on their operations and crop progress by email or phone. Growers from the heart of the Corn Belt and Soybean Belt reported below average temperatures and persistently wet weather, which has pushed corn and soybean planting well behind the five-year average.

In contrast, growers from the Plains states are struggling with the opposite: persistent drought, high winds and depleted soil moisture.

So, what lies ahead? The forecast for May suggests the stalled planters of the Midwest might get a chance to run hard in the weeks to come, said DTN Ag Meteorologist Emeritus Bryce Anderson.

"[T]he week after Mother's Day shows considerably more promise for drier conditions than we saw during April and the first few days of May," he wrote. "In addition, temperatures have a near to above normal component -- a big change from the very cool pattern that ushered in the month of May."

With modern planting technology, farmers can make huge strides in a short timeframe, so some catch-up is possible -- though not everywhere, Anderson cautioned. And the forecast is not as promising for droughty areas of the Plains.

"The forecast also indicates no easing of drought conditions in the Southern Plains," he concluded. "But when it comes to corn planting, the progress outlook is the best that we have seen so far this 2022 season."

SOGGY AND COLD BUT READY TO RUN

You have to give Cody Wahlstrom credit for his optimism. It's still soggy and cold in west-central Minnesota where he works as an agriculturalist for the Minn-Dak Cooperative, but he's looking on the bright side.

"Thankfully precipitation finally hit the ground as rain instead of snow," Wahlstrom rejoiced. Rainy forecasts persist this month, but he sees a small planting window opening -- and another silver lining: "One bonus of going to the field this late is the frost has pushed out of the ground so when fields come into fitness, barring rain, we should be able to make a strong push to get the crop in."

Overall, DTN Farm Advisers from Indiana, Illinois, Missouri, Minnesota, Ohio and Ontario all reported being sidelined to some degree by the persistently wet, cool month of April.

In the most extreme side of the reports is Dan Petker, who has already lost his entire wheat stand to cold, saturated soils in southern Ontario. "We've rolled all our wheat contracts to next year," he said. "It's a little humbling."

In north-central Missouri, planting seems pretty distant to Kyle Samp, too, after the two-week forecast for his region turned biblically wet. "The coming week looks like an ark might be required," lamented Samp, who barely eked in some NH3 applications last week, and is itching to get a sprayer over his fast-growing weeds. "Even fields that did have [fall residual] are starting to get pretty green."

In Michigan, Simpkins, who also sells seed, has some customers already cancelling seed corn orders and switching to soybeans, and he worries for those who haven't secured the right chemicals yet. "Anyone who didn't have supplies bought are going to have a hard time," he noted.

SOME PROGRESS AMID THE GLOOM

Some DTN Farm Advisers did report planting progress, after they hit the field during narrow windows of dry weather in the past week or two.

Tile lines are running hard in east-central Illinois, where Reid Thompson is grateful that a brief window of dryness ending on April 29 let him seed one-third of his soybean acres and a quarter of his corn acres, as well as spray some herbicides. "Still a long way to go," he noted.

That same weekend planting window was seized by southwest Indiana farmer Scott Wallis, who got about 600 acres of corn and soybeans in before the rain started up again. "We are behind normal but nothing like 2019 yet," he said.

And in central Ohio, Keith Peters managed to get a quarter of his soybeans and 10% of his corn planted and is content to watch his wheat enjoy the cool, wet weather for now.

Paul Speck is a southwest Iowa farmer bucking his state's slow planting trend: he has about 90% of his 400 corn acres planted, and scouting has shown the seeds are successfully sending their first root down into the ground. Speck is now readying his soybean planter. "With this year, it's going to be the 10th of May before I get started on beans, but it doesn't take long to get them in," he noted.

Two DTN Farm Advisers did report -- almost bashfully -- being in the Goldilocks zone so far this spring -- not too wet, not too dry. Northeast Oklahoma farmer Zack Rendel is sitting in a rare pocket of good fortune in the Southern Plains, where timely rains have helped a lush stand of winter wheat develop. And those rains fizzling out in the past 10 days helped him squeak in his corn crop. Rendel slammed the last seed in the ground the day before his full insurance coverage cutoff date of April 30.

And on the Eastern Shore of Maryland, Jennie Schmidt is also eyeing ideal field conditions, although cool soils have limited her planting to 300 acres of soybeans and some corn. That's a hard-earned comfort, she noted, given that she lost half her grape crop to a late frost the last week of April.

A COUNTRY DIVIDED BY DROUGHT

For an utterly different spring season, one need only stray a little westward, where deepening drought is plaguing much of Nebraska, Kansas, Oklahoma and Texas.

Although recent spurts of rain are nursing winter wheat along in that region, growers report permanently diminished yield potential and many abandoned acres after a spring of dry weather and punishing high winds. (See more on the winter wheat crop from DTN here: https://www.dtnpf.com/…).

The blowing dust and painfully dry soils of the far western Oklahoma panhandle are giving farmer Kenneth Rose a 20th century flashback. "It reminds me of boyhood years in the '50s and '60s," he said. Recent moisture is welcome, but far too late to help his dead wheat crop, which has received less than an inch of rain in the past six months.

Likewise, farmer and rancher Mike Lass has seen zero measurable rainfall on his operation in the South Plains of the Texas Panhandle since July 2021. Irrigators are running hard to keep dirt from blowing, stop wildfires and maybe put some seed in the ground. "Pastures are bone dry," Lass noted. "I've never had to supplement cattle this late in the year. It's shaping up to be a not-so-profitable cattle year thus far."

But it's hard to keep a desert farmer down, both Lass and Simpkins prove. "Ranching and farming in the desert has its challenges, but that's fine -- it's what we signed up to do," Lass said. "It will rain again, it always has."

Rose echoed that sentiment. "I am confident there are better years ahead," he said. "Isn't that the hope that keeps us going?" 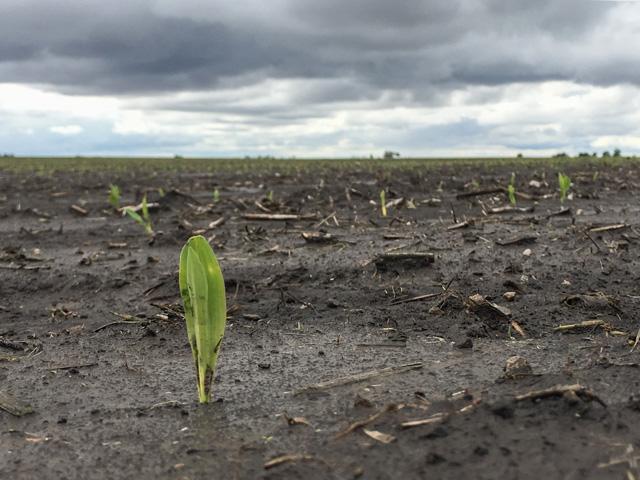