Smell a handful of healthy topsoil: It is earthy yet sweet, and it feels and looks like moist chocolate cake, said farmer Gail Fuller, of Emporia, Kansas. This topsoil is your productivity zone.

The product of residue breakdown and photosynthesis, your topsoil is about half organic carbon. Organic soil carbon is food (sugars and carbohydrates) for the tiny microbes that magically convert soil nutrients into forms that crops can use immediately. Therefore, "soil organic carbon levels and soil organic matter go hand in hand."

In this analogy, carbon is the fuel for your soil "factory," said Don Reicosky, USDA-ARS soil scientist emeritus, in Morris, Minnesota. "Crop leaves are soil factories' solar collectors, absorbing solar energy, carbon dioxide and water to produce sugars (carbon) and oxygen. Soil microbes are your factory workers, recycling nutrients -- they need to be fed (carbon) just like us. Their meals are 45% carbon, the No. 1 food source driving this whole living system."

"Carbon is the framework and the fuel of every living thing," said no-tiller Bryan Jorgensen, of Ideal, South Dakota. He and his family believe their native prairie ecosystem of no-till, cover crops and grazing livestock efficiently recycles roots, crop residues and organic matter into carbon and nitrogen that feed crops.

"Green growing plants are the best way to convert the sun's energy to carbon efficiently, as native prairie plants have done for thousands of years," he added.

Alliance, Nebraska, 30-year no-tiller Mark Watson labels carbon as the building block of soil productivity. "It's the main tool you have to work with in farming more productively. Aggregates are formed by soil microbe excretions, which 'glue' soil particles into larger aggregates. This provides a home for all the soil microbes. Soil carbon also raises soils' water-absorption capacity."

Given his 15-inch annual rainfall, storing soil water is critical to crop production. Higher soil carbon levels have raised Watson's winter wheat yields from 35 bushels per acre (bpa) to 60 bpa with the same fertilizer rates and eliminated summer fallow from his rotation while adding corn and yellow field peas.

In wet regions, these carbon-fed aggregates translate to more resilient soil after downpours. "You'll have virtually no runoff after a heavy rainfall," Reicosky said.

"Unlike other synthetic crop nutrients, there isn't a synthetic form of carbon that can be added to the soil," Watson said.

What does soil carbon have to do with profits? "Stored rainfall and the increased nutrient cycling resulting from higher soil carbon are what added to grain weight and makes the high yields," said Jerry Hatfield, director emeritus, National Laboratory for Agriculture and the Environment. "If we go from 2 to 4% soil organic matter (half of which is carbon), that translates to having 13 days of available soil moisture without water stress during grain-fill instead of just eight days. Yield variability results from soils' inability to supply moisture during grain-fill. Profit comes from being able to achieve a yield above break-even costs. Field areas with low organic matter are low-yielding, and yet we apply just as many inputs. Enhancing the soil organic matter makes low-yielding areas profitable."

Research bears this out. Continuous no-till requires 50 fewer pounds per acre of nitrogen (N) in a long-term system, according to research by North Dakota State University Extension soil scientist and soil science professor Dave Franzen. "After five or six years of continuous no-till, the soil microbial population is much more diverse, and there are more of them," he said. "N is as limiting to microbes as it is to plants, so I think that applied N is being taken up by microbes, released through the season through death/decomposition/release, protecting against N losses. In addition, we recently found that the activity of asymbiotic N-fixers is much greater in no-till soils than in conventional systems, explaining some of the efficiency seen in N-rate experiments."

An active soil biological system releases nutrients in the soil that are normally tied up or unavailable for plant use, said Jorgensen. "As an example of how feeding soil microbes carbon feeds crops more efficiently: We have several lifetimes' worth of phosphorus (P) in our soil system, but it's not readily available." He's reduced commercial N rates and P application rates by 70% under this prairie system.

"A conventional corn/soybean rotation is carbon-negative and mines the soil rather than renewing it," he said. "Tillage releases nutrients before they're needed, creating a leaky system. In undisturbed systems, livestock and soil microbes recycle nutrients and residues."

Kansas farmer Fuller added, "Aside from soil-health tests like Solvita and Haney, I use observation to assess my soil's carbon levels and soil health. Carry a spade -- the ease of it entering the soil tells you a lot about the amount of humus. If it's difficult to penetrate the soil, you need more soil carbon to create aggregates and more soil tilth."

The last 150 years of tillage have cut U.S. soil carbon levels by 30 to 70%, USDA-ARS soil scientist emeritus Reicosky said. "This contributes to soil degradation, excessive runoff and erosion, water pollution and costly environmental damage because there is less soil organic matter (carbon) to build soil physical, chemical and biological properties, and to retain and cycle nutrients."

Since the start of settled agriculture about 10,000 years ago, soils have lost an estimated 135 billion metric tons of organic carbon, Lal said. Soil carbon loss results from erosion, fires and tillage oxidizing soil organic matter. We can restore this soil carbon in 25 to 50 years or longer, he said. "In Ohio, that would be possible at a rate of adding 1/4 to 1/2 ton per acre per year."

"In parts of North Dakota, soils' total carbon loss is 90%," Franzen said. "We've lost most of the original North Dakota topsoil to wind erosion. Early 1900s' soils had a topsoil depth up to 3 feet with more than 6% organic matter."

Now that we understand carbon's vital role in farmer profits, "We need to change our farming practices to be more CO2-oriented," said Will Brinton, Woods End Soil Labs, soil biologist and founder of the Solvita soil health test.

South-central Nebraska farmer Keith Berns coined the term "carbonomics" to illustrate how soil carbon is the universal currency supporting crops, living soil and yields. "Carbon is the main food source for soil biology; it is collected (through leaves' photosynthesis), spent (eaten by beneficial soil organisms) and stored as soil organic matter," he said.

Berns has no-tilled for 25 years and used cover crops for nine years in Bladen, Nebraska, and co-owns GreenCover Seed, a cover-crop supplier. The soil provides nutrients, habitat for roots and water storage. 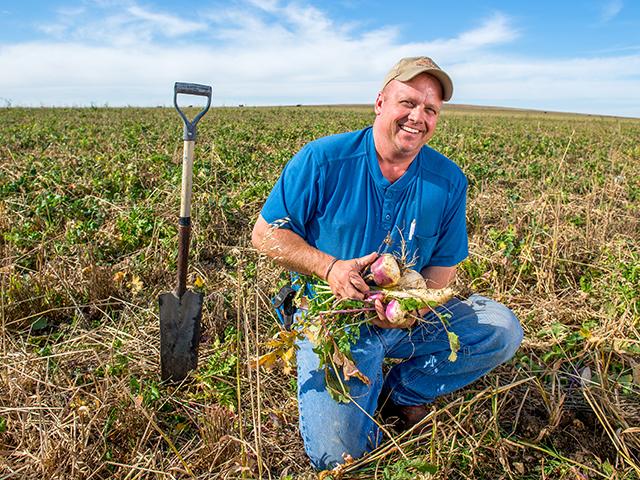