DECATUR, Illinois (DTN) -- Soybeans may have the reputation of being a fickle crop, but agronomist Dustin Bowling maintains they are merely misunderstood.

"Too often, we try to lump soybeans into the category of the corn plant. We know what has let us push the needle on corn yield, and we try that on soybeans," said Bowling, Missouri-based agronomist for AgriGold.

"We end up scratching our head because we have a hard time getting the soybean to react to those management tactics and chalk it up to the soybean being too stubborn. We tell ourselves it is going to do what it wants, no matter what we do," he said.

Instead, he urges farmers to treat the soybean like a factory by adjusting management practices to meet the biological needs of the plant throughout the growing season. "Think of it as providing everything that factory needs to keep the lights on and running efficiently all season long," Bowling said.

With favorable market prices and pricey nitrogen pressuring corn and cotton acres, soybeans are in the spotlight this year, said Kris Ehler, a farmer and agronomist for Ehler Brothers, a family-owned seed business based in Thomasboro, Illinois.

"Let's be honest, soybeans have been paying the bills on many central-Illinois acres over the past few years. It's time to quit treating them like a rotational crop," he said. Relying on seed companies to bring yield isn't enough, Ehler added. "A half-bushel or three-tenths of a bushel-yield increase per year is not going to cut the mustard if we want to remain sustainable."

Jeremy Ross, University of Arkansas System Division of Agriculture soybean specialist, has already seen practices and attitudes shift dramatically in the Mid-South. "Farmers in this state used to tell you they were a cotton or rice farmer," he told DTN. "But we had 16 farmers exceed the 100-bushel-per-acre mark in our state soybean contest this year [2021], and it was a first for 10 of those farmers."

Taking clues from the state's "Grow for the Green" yield contest from 2009 to 2021, Ross said winners have moved planting dates up by nearly a month on average. Seeding rate has dropped to 134,000 seeds per acre compared to 160,000 to 170,000 seeds per acre on average in that same time frame. More racehorse soybean varieties compared to workhorses have also increased yield potential but often also demand more management if they aren't as hardy, he explained.

But Ross sees growers in his state moving to more indeterminate varieties, which continue to flower and are of shorter maturities.

"The real difference, though, is farmers pushing soybean yields are walking these fields hard and being timely with what needs to be done," Ross added. "They are using sensors to indicate root growth and whether a late dose of irrigation will be economical to push seed fill. I wouldn't say we've got all the answers, but we're figuring some things out."

"We are looking at the key things we can do to put the plant in the position to win or take advantage of what Mother Nature provides during those periods," he said.

It all starts with understanding how the crop harnesses light energy to fix carbon dioxide through photosynthesis. Plants breathe in carbon dioxide through stomata in their leaves. Corn, for example, is classified as a C4 plant. It can close stomata to conserve water but continues to respire under hot, dry conditions.

Soybeans, on the other hand, are a C3 plant. Soybeans close the microscopic pores in the leaf when subjected to enough heat or other stress.

"At their bare bones, corn and soybean are just wired differently," Bowling explained. He points to the volume of the biomass produced by each as another example. Consider how much soybean end use is produced at 120,000 seeds per acre compared to what 30,000 corn seeds will yield, he suggests.

"A corn plant operates at a sprinter's level because of its C4 metabolism. It's going to react very quickly to nutrients you give it and keep pushing toward the goal at a faster rate -- accumulating a lot more carbon and a lot more natural resource fixation along the way," he said. If you ever wondered why common waterhemp can so quickly outdistance a soybean crop, consider that it is also a C4 plant, Bowling noted.

Soybean plants are more like a cross-country runner. "They've got the long game in mind and chug along at a steady pace. We know that available water at pod fill is still a big deal for yield, but we want to get the plant to that point in the best shape possible so it can finish," he said.

That's why Ehler is an advocate for earlier planting to push the plant to begin flowering before summer solstice (June 21) to take advantage of the most sunlight possible. He figures he gives up 4/10 to 5/10 of a bushel per day after April 25. The 2020 season has been the only year in the past 13 seasons that required some replant because of cold conditions, but he also depends on seed treatments and inoculants to help protect the seed.

On average, indeterminate soybean plants add one main stem node every 3.7 days after the first trifoliolate appears until seed development begins. An earlier start to the growing season results in more stem nodes for flower, pod and seed production. The quicker the canopy closes, the more competitive the crop is with weeds, too, particularly those like waterhemp and Palmer amaranth that emerge throughout the season.

Understanding how much the soybean crop removes from the soil is also key, as is understanding the 17 macronutrients, secondary nutrients and micronutrients required to make that soybean plant resilient. Starter fertilizers aren't just for corn anymore, particularly when planting early, Bowling said.

The second quarter is the most forgiving in terms of management. "Here, we are typically focusing on herbicide program completion and avoiding damage below the cotyledons. Nutrient needs by the plant slow and are minimal during this period," he said.

R1 marks the beginning of flowering as the plant starts its reproductive process. "During this period, maximizing photosynthesis, water and sunlight directly correlate with yield gains," Bowling pointed out.

The plant gets hungry again as it still needs to achieve two-thirds of its height, he explained. For example, at full bloom, which lasts for 16 days, the plant sucks down 7.81 pounds of nitrogen per acre per day, 1.75 pounds of phosphorus and 5.75 pounds of potassium. Those needs continue to build as the plant moves into early pod and soft seed.

"Less than 10% of the total nitrogen is used in the first 51 days -- or in other words, 91% of it is used in the second half of the soybean's growth cycle," Bowling said. "Like nitrogen, a relatively small percentage of phosphorus and potassium are utilized in the first two quarters of soybean plant growth, with the remainder taken up later in the growing season."

R3, or pod formation, is what Bowling calls fourth quarter. The source-to-sink relationship begins to change with all resources going toward the seed. Foliar feeding opportunities, fungicide applications and irrigation are all tactics being deployed to extend grain fill.

"We're using tissue testing and all kinds of tools to unlock the mysteries of this crop," Bowling says. "We're learning more every year, but taking our clues from the soybean itself is key." 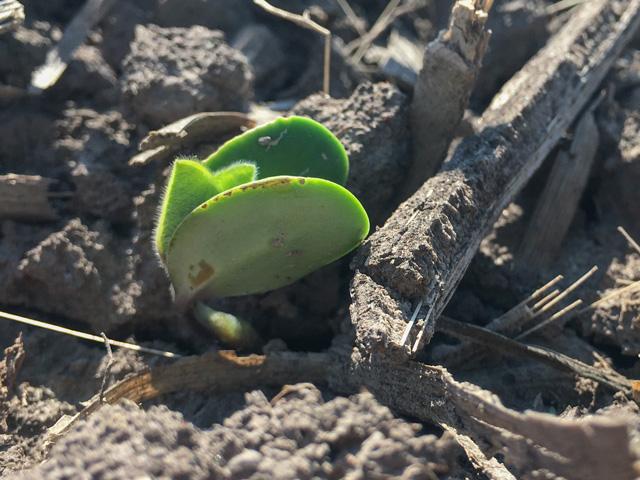