OMAHA (DTN) -- Corn and soybean producers apply phosphorus (P) fertilizer in both spring and fall, but research from University of Minnesota Extension indicates the two crops could require the nutrient at different times.

Depending on the amount of P in the soil and the pH of the soil, corn could benefit more from spring applications. Soybeans, meanwhile, appear to have a slightly better response with fall applications.

SOME DIFFERENCE WITH TIMING

While Minnesota guidelines do not specify benefits related to application, most farmers apply the nutrient when it is most convenient for them -- which is typically in the fall.

Kaiser said university researchers have conducted fall/spring timing trials on nine corn and nine soybean locations in the state since 2019. Rates of 0, 30, 60 and 90 pounds of P were applied in the fall and the spring. The trials took place side-by-side in the plots.

Corn yields across the trials were slightly higher with the spring applications; spring outyielded fall by 7 bushels per acre (bpa). Soybean yields, meanwhile, were 1 bpa greater when P was applied in the fall versus the spring.

"The corn sites responded better to the spring application while soybeans were the opposite, with just a small yield difference," Kaiser said.

Minnesota researchers also looked at the economics of spring- and fall-applied P. A spring application of P in corn with P prices at $0.80/lb. had a $23-per-acre profit; the same price of P had a $29-per-acre profit for fall application in soybeans.

Kaiser said it appears corn likes a fresh application in the spring while soybeans liked the fall season application of P, especially in P-deficient soils.

For low-testing soils with high or low pH, it may be worth delaying to a spring application of P ahead of corn. For neutral to slightly acidic pH when soils test medium or higher, a two-year spread before corn seems like a good option, he said.

One thing Kaiser wanted to point out was timing was a moot point in high testing soils. Timing really didn't matter much if producers were applying to soils at the Bray soil test of 15 parts per million (ppm) or above, he said.

Another longer-term P trial from the University of Minnesota took place at three locations (Lamberton, Morris and St. Charles) from 2009 to 2018. Multiple rates of P were applied in a two-year corn/soybean rotation.

Kaiser said the results of this study showed soybean yield was not affected by the timing of the P application. Application before corn or soybeans produced greater corn yields at two locations responsive to P fertilizer applications.

In addition, in this study starter only for corn yielded the same as broadcast P.

Kaiser said the data in this study favors some sort of P application ahead of corn. Soybeans, in most cases, did not seem to care when P was applied as long as there is enough in the soil.

"I would suggest at least a starter ahead of corn if you apply all broadcast P ahead of soybeans," he said.

Those soils with 7.6 or great pH levels tend to have greater potential for P in forms not immediately available to crops, he said. Soil samples in June while a crop is in the field showed a significantly lower soil test P following fall fertilizer application, which indicates the P likely had reacted with calcium and was no longer in an easily extractable form.

Applications directly ahead of soybeans seemed to be favored in high carbonate soils, Kaiser said.

"The degree soil test dropped from fall application to the June sampling calls into question a two-year spread ahead of corn," Kaiser said.

To see the whole presentation. "Timing of P application for corn and soybean production," go to https://www.youtube.com/… 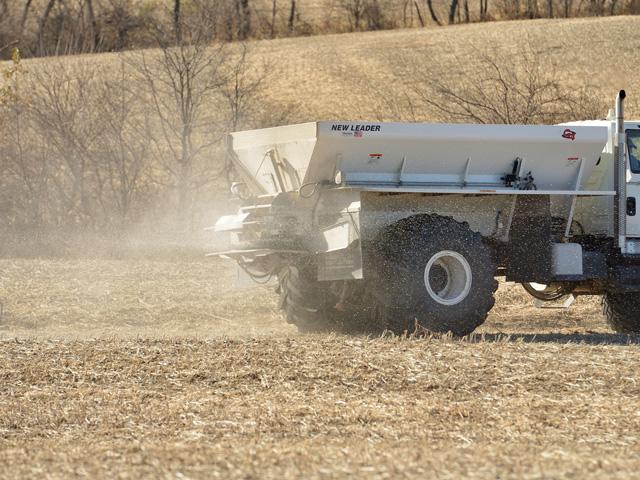