NEW ORLEANS (DTN) -- Banding dry fertilizer prior to planting corn, or possibly in-season, can help farmers get the most out of costly nutrients and boost yields.

Fred Below, a professor of crop physiology at the University of Illinois, said the current corn yield gap is 439 bushels per acre (bpa). That's the difference between David Hula's world-record irrigated corn yield of 616 bpa, set in 2019 near Charles City, Virginia, and the 2021 national average corn yield of 177 bpa.

"That's the opportunity for you to increase your corn yield with better crop management," Below told farmers earlier this month at Commodity Classic in New Orleans, the largest farmer-led agricultural and education show in the United States.

Below said increasing fertilizer efficiency by banding, which provides roots easier access to nutrients throughout the growing season, can help narrow the yield gap. He doesn't claim yields will skyrocket by hundreds of bushels per acre by placing phosphorus (P) and potassium (K) in the root zone compared to broadcast applications on the soil surface, but University of Illinois research indicates yield improvements can occur.

A 2019 study led by Below and Scott Foxhoven, a University of Illinois graduate student, compared broadcasting and banding P and K before planting corn. Researchers attempted to replicate the study in 2020 and 2021, but weather problems wiped out both trials. Here are the study details:

-- A day before planting, 154 pounds of MAP (monoammonium phosphate) and 100 pounds of MOP (muriate of potash) per acre were applied. This equates to 80 pounds of P and 60 pounds of K per acre. MAP also supplied 17 pounds of N per acre.

-- A GPS-guided tractor pulled a coulter-type tool bar to band fertilizer 4 to 6 inches deep in corn rows. Seed was planted directly over the banded nutrients. Broadcasting was done by a dry fertilizer spreader.

-- Pre-plant nitrogen (N) application consisted of 280 pounds per acre of broadcast UAN32. "We did a higher N rate to eliminate the potential effects of N coming from the MAP in the fertilized plots," Foxhoven said. "We wanted to study the response to only P and K, which are immobile nutrients."

"Banding has the potential to increase yields without increasing inputs," Foxhoven said. "Plus, it's better for the environment than broadcasting fertilizer, which is more prone to run-off."

There are several types of fertilizer banding. Some include directly under the seed, 2x2 placement (2 inches to the side and 2 inches below the seed) and in-season surface application next to plants.

As farmers continue to push plant populations and adopt narrow rows (less than 30 inches apart, which is the most common row width, according to USDA) to increase yields, Below said banding nutrients becomes even more important. The average corn population in the U.S. in 2021 was 29,000 plants per acre, according to USDA. In Iowa and Illinois, the average was 31,800 and 31,500 plants per acre, respectively.

However, Below said yield component compensation makes it difficult to boost all three functions at the same time. "It's almost impossible to increase them simultaneously," Below asserted.

For example, corn root systems shrink as plant populations increase, making it harder for plants to take up nutrients to thrive. According to University of Illinois research, corn roots average 12.3 grams, 10.5 grams and 9 grams per plant at 30,000, 36,000 and 42,000 plants per acre, respectively. In other words, for every additional 1,000 corn plants, root size shrinks by 2.5%.

Below also said the number of kernels per plant typically decrease as plant numbers per acre increase. And kernel weights often go down as kernel production per plant increases. "How can we reverse these negative relationships? Better fertilizer placement," he concluded.

In the same 2019 study of 10 corn hybrids and three planting populations comparing P and K application methods in corn, there was a correlation between yield and plant populations.

Placing fertilizer in the soil where smaller root masses can reach it allows plants to better utilize nutrients. He said more kernels were produced and kernel weights didn't go down, resulting in higher yields.

"We were able to break the negative yield component relationship ... by making sure fertility was concentrated in the beginning (of the growing season) and making more available later in the season," Foxhoven said.

Indiana farmer Randy Bales is an advocate of narrow-row, high-population corn. He and his son plant 20-inch rows and shoot for about 40,000 plants per acre. He said banding fertilizer on their Lewisville operation is a must to make the system work.

Bales said the yield benefits of banding per University of Illinois research results pretty much mirror what he sees on the farm. The Baleses have banded fertilizer since 2017, when they switched to narrow rows and increased per-acre corn populations by about 6,000 plants.

Foxhoven and Bales say the boost in corn yields from banding will pay for equipment, if needed, and then some.

"It's (banding) worth it or I wouldn't be doing it," Bales said.

Foxhoven said time management is a legitimate worry for farmers who are considering banding fertilizer. They're concerned about getting all their acres banded in the spring and corn planted in a timely manner, given unpredictable weather.

There is a possible solution, Foxhoven said. In-season application of P and K when corn is at the V5 or later vegetative growth stages is an option for acres that didn't get banded preplant.

In another University of Illinois fertilizer banding study in 2020 and 2021 at three sites, researchers studied MAP and MOP applications to corn via preplant broadcasting, preplant banding and in-season at the V5 growth stage. For the in-season application, researchers manually applied dry fertilizer along the base of plants to simulate a high-clearance machine equipped with a dry fertilizer box and boom doing it, which Foxhoven called "dry-drop." It's similar to applying liquid fertilizer in-season with Y drops.

"It's (dry-drop) a different type of banding ... we made it up," Foxhoven said. He said the "dry-drop" application equipment and technology isn't commercially available, but he expects it will be in the near future. Foxhoven knows of farmers who have rigged up high-clearance machines to "dry-drop" granular fertilizer.

In the University of Illinois broadcast vs. banding study that includes in-season application, 180 pounds of UAN32 was broadcast applied preplant on all research corn acres. MAP and MOP were applied at 154 pounds and 100 pounds per acre, respectively, via preplant broadcast, preplant banding and dry-drop at the V5 growth stage. This equates to 80 pounds of P and 60 pounds of K per acre. MAP also supplied 17 pounds of N per acre. Here are the results:

"I was surprised dry-dropping had similar yield efficiencies compared to preplant banding," Foxhoven said. "I wouldn't necessarily recommend it as the primary application (due to environmental concerns from fertilizer runoff), but I think it could be a great backup application method if you can't get across every acre in the spring preplant banding." 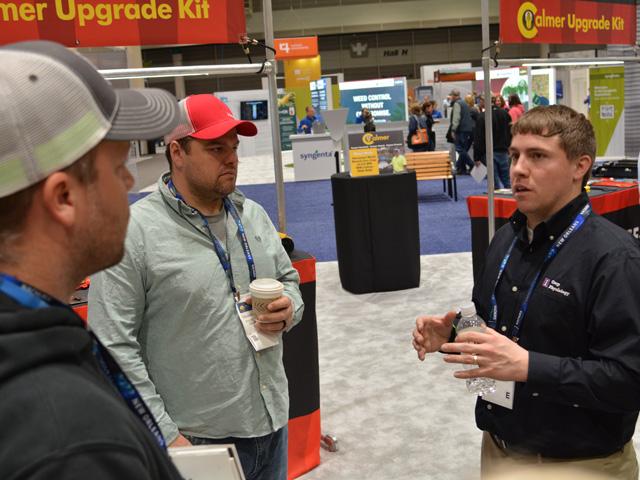