During the past several years, irrigation equipment manufacturers have been busy reinventing sprinkler systems to serve more as "hired hands" than just an efficient way to water crops.

From running self-diagnoses to reduce downtime and repairs to monitoring the crops in the field, the new generation of irrigation hardware is designed to help growers make better use of their water resources, meet environmental goals, operate with fewer employees and improve harvest yields.

Progressive Farmer has been following the irrigation industry closely since the first center-pivot rig was installed in Nebraska in 1956, and now, 66 years later, this roundup of the latest offerings from major irrigation OEMs (original equipment manufacturers) catalogs how far technology has progressed. This is the second story on irrigation technology (see note below this article for the link to the first one).

The Pro board, which can be retrofitted to an existing Precision Point Touch system or added as an option to a new pivot, combines the following functions into a single controller:

Neal Schlautman, T-L's engineering manager, said the system allows growers to preset a specific water pressure for the system to build to before the pivot kicks on, assuring the machine is irrigating when it begins to move.

"To improve efficiency in case of equipment stoppage, safety inputs deliver specific readouts for troubleshooting," he explained. "It's not just a 'check-engine' light, it's a diagnosis of where the problem is." The additional auxiliary relays allow for precision on-off functions based on pivot angle, Thom explained.

"A chemigation pump can be controlled to be functioning on corn and turned off when the pivot reaches the programmed spot where a field split switches to soybeans," he said. "The original Precision Point Touch has two end-gun controls. With the Pro system, a producer can easily tie into the extra relays to control individual spans or an entire half of a pivot."

Growers in traditionally nonirrigated farming areas and those with limited water resources will be interested in 360 Yield Center's new 360 RAIN unit that features a three-wheel, well- or hydrant-tethered 24-row sprinkler that can operate on 100 to 225 gallons per minute.

Gregg Sauder, founder of 360 Yield Center, in Morton, Illinois, said his firm ran seven 360 RAIN units on fields in three Corn Belt states in 2021 and will have six commercial units running through the 2022 growing season. He said test-strip results at the sites showed significant yield increases over "dryland" areas with the application of only 4.5 inches of additional water.

With a 60-foot boom, the diesel-electric 360 RAIN sprinkler waters 24 rows through 360 Y-Drop-style hoses at the base of the plant, supplied by up to 2,900 feet of 3-inch diameter hose dispensed by a computer-controlled reel. As the machine moves up and down the crop rows, the well-tethered reel dispenses and retrieves the hose.

"At 0.45 mph, 360 RAIN can apply over 2 million gallons of water per week -- the equivalent of 1 inch of rain over an 80-acre field from a well producing just 215 gallons per minute," Sauder explained. "Two years of test data show a strong yield response to timely doses of low volumes of water and nutrients."

In 2020, replicated side-by-side trials showed test strips that received 4.5 inches of water through the system over the growing season generated an additional 65 bushels of corn per acre -- a 32% improvement over nonirrigated strips, he added.

Sauder said the sprinkler system follows maps generated by the planter (with equipment provided by 360 Yield with the RAIN unit) and operates on Real-Time-Kinematic-corrected GPS signals for sub-inch accuracy. The system also provides an avenue to apply manure, micronutrients and nitrogen in the irrigation water, and can operate in any shape field, even those with obstructions.

"The RAIN unit is very flexible and can make pinpoint applications to trouble spots within a field if necessary," Sauder explained. "For instance, you plant corn on Monday and then get a rain. By Thursday, there's a crusting on 25 acres of a problem soil type in your field. RAIN has the capability to go to that spot and apply 0.4 inches of water to soften that area and improve stand emergence."

How does it make corners dragging the hose without damaging the crop? Sauder explained it this way: "A specialized dispenser feeds the hose to the ground so that the hose is never pulled or dragged through the field. The dispense and reel speed match ground speed, so the hose stays in the place where it is laid.

The sprinkler cart operates on a 48-volt DC system supplied by an onboard generator powered with a small diesel engine. Each wheel has its own motor. Sauder said tests show the 300-gallon fuel tank will need to be filled only once during the season under normal circumstances. He added the system also can be configured to operate with a 120-foot boom.

FieldWise LLC grabbed the attention of irrigators during the past year with its introduction of the three-part FieldWise Nano system. It offers a modular design, entry-level sprinkler monitor with growth potential that can provide full control of most irrigation systems and several other farm applications.

Jared Kruntorad, assistant manager of the Ewing, Nebraska, telemetry company, which has collaborated with major irrigation equipment providers during the past several years, said providing farmers the ability to grow into a full-control system over time was a prime inspiration for the Nano system.

"Many entry-level monitors are just that: monitors," he explained. "They can see where the system is and monitor pressure. After 13 years in the telemetry business, we wanted to give growers a simple system that they could install themselves and grow into more complex control functions as their business and experience allowed."

The beginning step of the system is the Nano Solar, which monitors the on-off status of the system, provides field location and monitors pressure.

It's a low-cost basic monitor that can be ordered online and installed by the farmer, Kruntorad explained. The next step is the Nano Basic, which added a relay board to the Solar's modular-design core circuitry and wires into the pivot tower box. It allows the grower to start, stop, control an end-gun and change directions, speed and pressure.

"The next step is the Nano Advanced, the most intelligent telemetry product on the market," he said. "It's identical to the Basic but comes with an in-field communication kit. It can be a stand-alone end-tower monitor, or it can be paired with a 5- or 10-inch touch screen universal computer panel, in which it would act as a remote GPS controlled wirelessly with a phone, tablet or computer. If cell service is marginal, the Advanced also can use radio communication for reliability."

The Advanced can be paired with the FieldWise SARAS (Smart Auto-Restart/Auto Stop) board.

Kruntorad said the Nano system is designed primarily for irrigators, but after the watering season is complete, the equipment can be used in other systems to monitor soil moisture or stored grain, or control and monitor grain bin dryers, fans and pumps.

He said the Nano is available through a 150-member dealership network with distributors located in Australia, Canada, New Zealand and throughout the United States.

"With radial tire technology, growers can run lower pressures -- 15 pounds per square inch for the Hi-Dration Lug -- and carry the same load with a larger footprint to reduce rutting and compaction," explained Scott Sloan, Titan ag product manager. "We developed a nondirectional self-cleaning design to provide maximum traction forward and backward for irrigation sprinkler use nearly six years ago, but we think adding radial technology to the design gives us the best of both worlds."

Competing brands offer radial irrigation tires and nondirectional tread designs, but none offer both features in one product. The Titan Hi-Dration Lug is available in 290/85R38 and 380/85R24 sizes and are covered under Titan's new eight-year warranty on all radial agricultural Titan tires.

Sloan said the new tire has been under development for about five years in collaboration with major irrigation machine manufacturers and, based on radial tractor tires, the compounds used in the Hi-Dration Lug could last on a sprinkler "for decades." 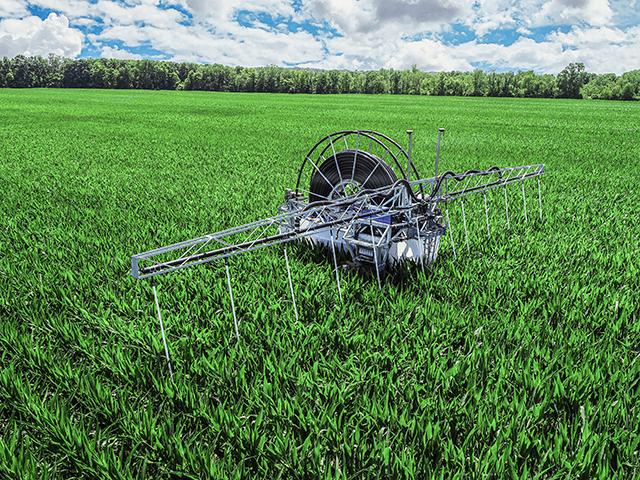