The top four yield winners from the National Wheat Foundation's 2021 National Wheat Yield Contest give a quick view of their winning field and the 2021 season, followed by a full list of the contest's national winners.

The Players: Steven VanGrunsven farms with his wife, Anna, a sixth-generation dairy farmer, while working as a crop consultant for Valley Agronomics in the Willamette Valley. Wheat is a rotational crop they plug into their farm's busy lineup of grass seed, crimson and red clover seed, corn, alfalfa and other forage crops.

The Field: This soft white wheat field followed a silage corn crop. One million seeds per acre, a shot of dairy manure and a mild winter got it off to a roaring start. "We got some great tillering through the winter," VanGrunsven recalled. With the rich manure source at work, he used a growth regulator to keep overgrowth at bay in the spring, as well as applying urea, potash and sulfur. Overall, his total nitrogen load landed around 200 units, he said. Three fungicide applications kept disease away, and 7 inches of irrigation supplemented the measly 2 inches of rain his region saw between March and July.

The Challenges: Drought and extreme, record-setting heat scorched his area this year. "We had 114-degree days in late June -- that decimated crops," VanGrunsven recalled. "Fortunately for this field, we happened to have irrigated just before that hit."

The Winning Card: Easy access to dairy manure gives his wheat an advantage, VanGrunsven said. But picking good genetics is his operation's all-important backstop. "Some breeders say, 'Breed for the worst, hope for the best,' and it's definitely true," he said. "It helped us this year."

The Players: Scot Poffenberger is the farm manager for William F. Willard Farms, nestled in Montgomery County, Maryland, a region which the farm shares with more than a million people. Together with farm partners Billy Willard Jr. and Joe Sayer, they grow corn, soybeans, wheat and sorghum on 2,500 acres split among dozens of fields, some as small as a few acres.

The Field: This soft red winter wheat field went in at 2 million seeds per acre in perfect planting conditions in the fall, along with some broadcast nitrogen, phosphorus and potassium, and a new micronutrient product Poffenberger is staying mum on. The field received split-nutrient sidedressing passes at green-up, Feekes 6 and Feekes 10, with his total nutrient load landing around 145 pounds of nitrogen, 150 pounds of potassium and 30 pounds of phosphorus. That last pass included insecticide and fungicide, as well. "It seems like the past few years, head scab gets worse and worse in this area," Poffenberger said. Twelve to 15 inches of rainfall at well-timed intervals finished the field beautifully.

The Challenges: Getting pesticides on in a timely fashion in May is hard between weather and applicator demand, Poffenberger said. "We're hoping to purchase our own sprayer at the farm this year."

The Winning Card: Mother Nature gets a lot of credit this year, with timely rains and a dry harvest period, Poffenberger said. But, his love of experimenting has brought some exciting new products to the farm, as well. "If you give me something to try, I'll always throw it on a few acres," he said.

The Players: Phillip Gross farms within a large family farm called the Warden Hutterian Brethren. Based in central Washington, the operation covers about 25,000 acres and produces a diverse range of dryland and irrigated crops, such as potatoes, corn, mint and wheat.

The Field: This field of hard red spring wheat was planted in the fall at 800,000 seeds per acre and powered through several hard freezes in the spring, Gross said. Most of the fertilizer went on at planting, when he added 130 pounds of nitrogen, 20 pounds of phosphate and 20 pounds of sulfur. "Because it went in behind corn, there was so much nutrient release from the corn stover that we just kept an eye out and tissue- and soil-sampled, and never needed anything in the spring," he said. Twenty acre-inches of irrigation helped the wheat weather the hot, dry season but also made conditions right for head scab and Fusarium head blight. So, Gross sprayed fungicides twice.

The Challenges: The extreme heat and dryness was "humbling" this year, Gross said. "We had 118 degrees with 22-mph winds right when the wheat was going from milk stages into soft dough," Gross recalled. "It just dehydrated it and took 35 to 40% off of the yield."

The Winning Card: Scouting and sampling are his secret weapons. "We just try to stay proactive and stay ahead of any problems that we know can show up on wheat -- insects, stripe rust, head scab," Gross said.

The Players: John Hofer farms on Sundale Farm, a multifamily operation spanning 12,000 acres in the southeastern corner of North Dakota. They raise turkey and hogs, and grow wheat, corn and soybeans.

The Field: This field of hard red spring wheat got off to a good start but quickly ran into hot, droughty conditions. "At one time in June, I thought it was going to make nothing," Hofer recalled. But Mother Nature nursed it along with about 4 inches of rain delivered in hundredths of inches at a time throughout the growing season. Because of the grim growing conditions, Hofer didn't sidedress the crop at boot stage as he normally would, but it did receive 100 units of nitrogen, 50 units of phosphate and 40 units of potash broadcast before planting. He also applied fungicides twice, as well as insecticide.

The Challenges: The drought that plagued the Northern Plains in 2021 kept Hofer guessing all season. "For awhile, it looked like there wasn't going to be any wheat," he said. His wheat stalled out at 18 to 20 inches tall as a result.

The Winning Card: Poultry manure smells pretty sweet to wheat, Hofer said. "We raise turkeys and then have to go somewhere with their byproducts -- that's good stuff," he said. "Smells a bit, but worth it." Ultimately, timely rains were the real lifesaver this year, small as they were. "We watched it just hang on for dear life, and then a few rains hit just right, and it really came around," Hofer recalled.

This is the second story in DTN's three-part series called Wheat Yield Contest. 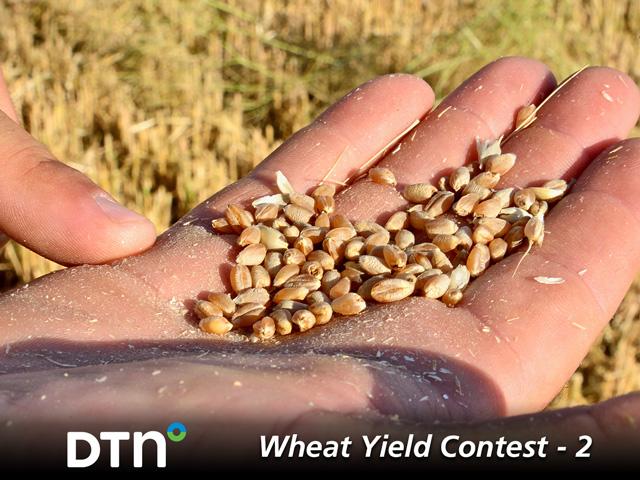