OMAHA (DTN) -- A global fertilizer market that has already seen many challenges in the past 18 months will see added pressure from the Russia-Ukraine military conflict, according to The Fertilizer institute (TFI). However, the exact magnitude is unknown for now.

TFI said in news release Wednesday it was concerned about the destabilizing situation occurring in the Ukraine. Its main concern is the safety of all the citizens in harm's way.

The actions of Russia will affect the global fertilizer market, as 90% of all fertilizer is consumed outside of the United States, according to TFI.

TFI also points out that the conflict will put stress and uncertainty on the energy market. Russia supplies about one-third of Europe's natural gas supply, the main feedstock to produce nitrogen fertilizers.

"Because of Russia's large fertilizer production and its role as a global fertilizer supplier, the removal of Russian production from the global marketplace will have an impact on supply," the news release said. "Despite the benefits afforded by a robust U.S.-based fertilizer industry, prices for our products are driven by global supply and demand factors."

In a call on Tuesday morning, RaboResearch farm input analyst Samuel Taylor said that while we don't know exactly how fertilizers will be affected by this conflict, there are two obvious areas: production and export of fertilizers that come from the region, and the flow of natural gas.

Ammonia and potash are two fertilizers at most risk. Taylor pointed out that urea, because it's a dry product, has good shipping flexibility versus a product like ammonia, which has a very ridged structure.

"One of the interesting bits about ammonia is it's transported from a pipeline from Russia down into the Black Sea, and that has actually been shut off in the eastern part of Ukraine," Taylor said. "That is a state-owned pipeline."

Taylor said that because of these issues, he believes ammonia and potash prices could stay elevated for some time now.

At the end of 2021, fertilizer analysts predicted global fertilizer prices could decline in the second half of 2022. World fertilizer markets so far have been fairly quiet, he said.

Certain geographies have larger exposure to these global fertilizer problems, he said. Brazil tops the list.

"When we look at a need for supply chain realignment, we have to look at Brazil as a country in great need," he said.

Beginning last week, Brazil was trying to find other sources for urea. The country was even exploring different bartering programs with the Iranian government, he said.

The country is expected to reenter the global market in the middle to second half of 2022. This could be a potential risk mitigant in a tightening balance sheet on the urea side, he said.

The International Food Policy Research Institute (IFPRI) also has been analyzing some of the impacts of the war and the sanctions on both Russia and Belarus. Currently, Belarus and Russia account for about 15% of all world fertilizer. Europe, including Ukraine, rely heavily on both countries for inputs such as potash.

"The Middle East, to India, and even Brazil import a significant share of our potash from this part of the world. So, it's a global impact," said David Laborde Debucquet, a senior research fellow at IFPRI.

"We have alternative suppliers. Actually, Canada is a big, big provider of potash. Now, how people can scale their production, that's not so easy, you know -- mining activities cannot be scaled up very quickly. So basic sales for that price have increased and will continue to increase our cost of production. And we could see a shortage of potash in many places, not only in Europe."

Speaking directly about agricultural production in Ukraine, Debucquet also noted 90% of the potash used by Ukrainian farmers comes from Russia and Belarus.

That doesn't bode well for potential spring production with the current conflict, he said.

Europe also relies heavily on Russia for natural gas, which is a key reason the EU has not placed any sanctions on energy markets.

"The natural gas markets right now are mainly regional markets, (and) that's why we have these big price gap between Europe and the U.S.," Debucquet said.

"The high price of natural gas in Europe leads to a high price of nitrogen fertilizer in Europe, an issue for European farmers. But (it's) also an issue for global farmers, and in particular the countries that were relying on Europe for buying a lot of their farming goods."

Large exporting countries like the U.S., the EU member states, Australia and others are the big players in world markets. They will be hit by high input prices, he said. 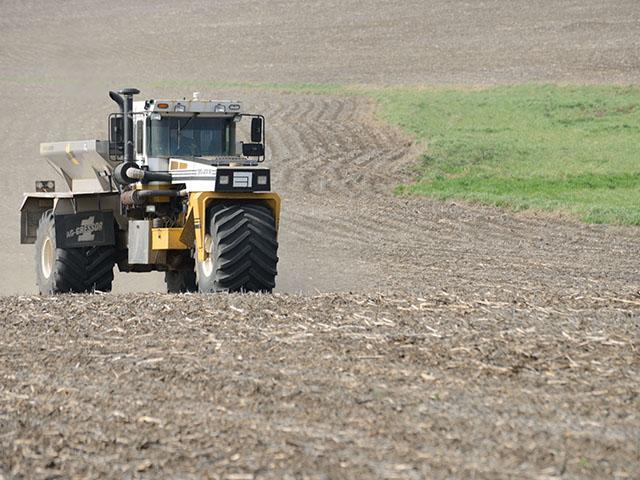