ROCKVILLE, Md. (DTN) -- Minnesota became the first state to try to formalize 2022 dicamba use, when its department of agriculture announced on Dec. 9 that it is seeking dicamba cutoff dates and a temperature limitation that will exceed EPA's current restrictions.

Minnesota state officials are attempting to make direct changes to federal dicamba labels -- a new approach that could create a new paradigm for state-by-state dicamba restrictions in 2022.

In a news release, the Minnesota Department of Agriculture (MDA) stated that it is working with EPA and the registrants to add the following Minnesota-specific cutoffs to the federal labels of four dicamba products:

-- A temperature cutoff of 85 degrees Fahrenheit, reached either in the field to be sprayed or in a forecast for the day in that location.

Should EPA and the companies agree to them, these restrictions will be listed for Minnesota on the federal labels of Bayer's XtendiMax, BASF's Engenia and Syngenta's Tavium herbicides. (They would also appear on Corteva's FeXapan herbicide, which -- though federally registered -- has been discontinued by the company).

Although nothing is formalized yet, MDA's Director of Pesticide and Fertilizer Management Division Joshua Stamper told DTN that the agency has received verbal commitments from the registrants that they won't fight the label changes.

In the background, however, looms a potential future EPA decision to alter these same federal labels, perhaps significantly, based on what the agency says may be an unacceptable amount of off-target injury in 2021. See more on that here: https://www.dtnpf.com/….

But, driven by a year of record off-target dicamba injury and complaints, Minnesota regulators said they couldn't sit back and wait on EPA to act.

"Our commissioner has wanted the EPA to be engaged in this, and we have been patient and waited for the EPA, but at the end of the day, we just can't continue like this," said Stamper. "The public just won't continue to put up with this."

At least one registrant, however, stated that state-specific changes to the federal label were unlikely.

"BASF is working with the Minnesota Department of Agriculture (MDA) to help it find an acceptable solution to its proposed Minnesota-specific restrictions for over-the-top dicamba applications," BASF said in an emailed statement to DTN. "However, BASF has not agreed to change the container label for Engenia herbicide. Any such changes would require EPA approval. Additionally, changes cannot be made to the container label for Engenia herbicide this late in the year due to significant logistical challenges. Any attempt to make such changes would delay applications nationwide next year."

Despite EPA's changes to the federal labels in 2020, Minnesota officials received over 300 complaints over dicamba injury in 2021 -- their highest ever. At least 115 of those complaints required a full investigation, and the MDA's laboratory and staff were overwhelmed, Stamper said. For the first time in its history, the lab will not be able to process all the dicamba residue samples it received this year.

"(Morale) is pretty low," Stamper said. "This is what a slow drowning looks like. I've had guys retire. To be honest, I don't blame them."

The geographic breakdown of those complaints and incidents is what led state regulators to produce different cutoff dates above and below Interstate 94, which runs in a southeastern diagonal across the state, from Fargo, North Dakota, through Minneapolis.

The entire state endured drought all summer, so it was hot and dry when applicators applied dicamba in June, Stamper recalled. But dicamba injury didn't appear to be consistent across the state.

"We didn't have many complaints north of I-94," he explained. "We don't know exactly why that is, but I don't want to put regulations on folks who don't purport to have a problem."

So the regulators landed on an earlier cutoff date -- June 12 -- for Minnesota soybean growers south of I-94, and stayed with the federal cutoff date for soybean growers -- June 30 -- north of I-94. But they decided to apply the temperature limitation of 85 degrees across the entire state, given dicamba's known tendency to volatilize more at higher temperatures.

"It's an imperfect solution to an imperfect chemistry," Stamper concluded. "Dicamba has a role (in weed control), but that role is not using it later in the season."

By seeking changes to the federal dicamba labels, Minnesota regulators are attempting to bypass the roadblock EPA put up last year limiting state pesticide rules that are more restrictive than federal pesticide labels.

In 2020, the agency announced that it was no longer accepting a special type of pesticide label created by states, called Section 24(c) special local needs labels, if they were more restrictive than the federal label of that same pesticide. Instead, EPA informed states that they needed to work through their individual state rulemaking or legislation, a time-consuming and political process that most states cannot accomplish in fewer than two years. Only two states managed to establish and keep dicamba restrictions via this route last year -- Indiana and Illinois. (See more here: https://www.dtnpf.com/….)

That left most states with no option but to follow the federal dicamba labels, a situation that Minnesota regulators told EPA "handcuffed" their ability to prevent the state's record-breaking year of off-target dicamba injury this year.

Should Minnesota regulators succeed in having dicamba registrants add these restrictions to their labels, EPA will have up to 90 days to approve those changes.

Stamper acknowledged that an EPA decision on dicamba label changes in that timeframe would throw the MDA's plans out the window.

"We would be disappointed, especially with the amount of work our staff have put into this, but I think this is a cautionary tale," he said. "At the end of the day, we have a label that almost no one can comply with. We have to do something." 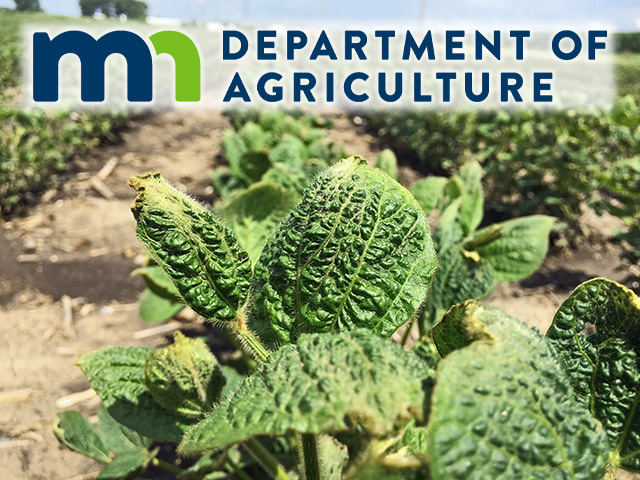