ROCKVILLE, Md. (DTN) -- Scientists from both Tennessee and Illinois have confirmed dicamba-resistant waterhemp in their respective states this week.

In Montgomery County, Tennessee, waterhemp collected from fields in the Cumberland River bottoms are showing roughly 4.5-fold levels of resistance to dicamba, said Larry Steckel, University of Tennessee Extension weed scientist, who worked with Purdue University scientists to confirm his findings. The Tennessee waterhemp populations are also resistant to Group 9 (glyphosate), Group 14 (PPO-inhibitors) and Group 2 (ALS-inhibitors), although surprisingly, 2,4-D is still effective on them, Steckel said.

By adding dicamba to its arsenal, these waterhemp populations become the second major dicamba-resistant pigweed species of concern in U.S. row-crop agriculture, following the discovery of dicamba-resistant Palmer amaranth in Tennessee in 2020. (See more here: https://www.dtnpf.com/…)

Perhaps most alarming is the Illinois discovery comes from a field that was not treated intensively with dicamba, and scientists aren't sure exactly what the mechanism of resistance is, Hager said. Their research suggests it involves a type of resistance known as metabolic resistance, which allows weeds to escape herbicide damage by rapid metabolism of a chemical, allowing them to survive multiple classes of herbicides, even those they have not been exposed to. There is also evidence of cross-resistance between this weed's multiple herbicide-resistance traits, said Pat Tranel, a University of Illinois molecular weed biologist working with this population.

"This kind of cross resistance really hampers us in our ability to tell farmers what to do," Tranel explained, since mixing herbicide modes of action will not prevent cross resistance or metabolic resistance and may actually encourage it -- by favoring weeds that can survive many classes of herbicides.

The Tennessee population of resistant waterhemp, in contrast, is almost certainly the result of widespread, continuous use of dicamba, Steckel noted. Dicamba use in Tennessee ramped up two decades ago when glyphosate would no longer control horseweed, he said. Then it soared when dicamba-tolerant (Xtend) crops were rapidly and uniformly adopted by the state's farmers after 2016, as the herbicide continued to be used in other row crops such as corn, he said. "I think that's why we're seeing dicamba-resistant weeds in our state quicker than in others." See a blog from Steckel on the full details of the Tennessee discovery here: https://news.utcrops.com/… .

"It is what many of us predicted would happen because we're not starting from scratch with dicamba" with Xtend crops, Hager said. "We've already had decades of selection against it, because we've used it for so long in agriculture."

The discovery drives home the need for farmers to keep weed populations as low as possible, said Tranel. "The fewer weeds that are there, the fewer rolls of the dice for evolution to work and find a solution to the herbicides," he said.

Given the development of metabolic resistance in weeds, non-chemical control options will need to play a bigger role in weed management of the future, Hager added.

"The closest you can get to zero weed seed at the end of the year, that's the winning strategy," he said. "Maybe that means harvest weed seed control, or maybe hand-rogueing weeds." 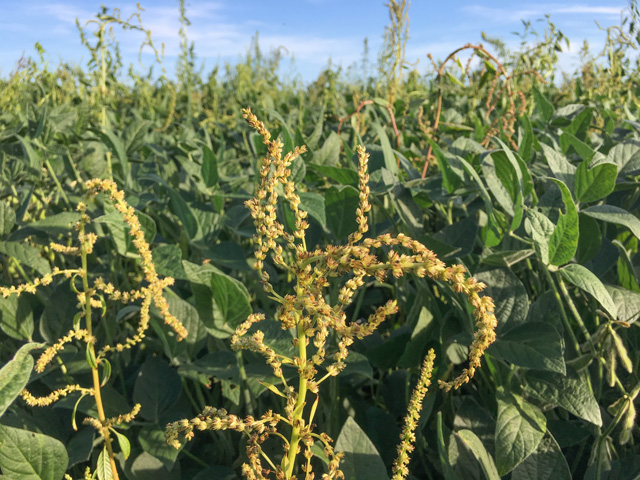