Take it from Marc Arnusch, a Colorado farmer who discovered he was overfeeding his wheat crop with nitrogen, in an effort to get the crop up and headed toward its optimal yield.

"We used to put nitrogen on in the fall religiously," recalled Arnusch, who farms in Keenesburg. "We wanted to provide a stocked refrigerator for the crop to pull from in the fall, winter and early spring."

Soil tests this fall can be a huge help to wheat farmers who are trying to navigate the challenging fertilizer market right now, Ruiz Diaz added. "To me, soil testing is key," he said. "Because, in many cases, that 30 to 35 pounds will already be there, especially in dryland situations where we don't always have excellent summer crop yields and we have some residual nitrogen left there."

That residual nitrogen can come from many places, added University of Missouri emeritus professor of nutrient management, Peter Scharf. "It could be left over from a corn crop; it could have mineralized while soybeans were growing, and they didn't grab it -- it doesn't take much to come up with 15 pounds of nitrogen," he explained. And unless you have very sandy soils, where rain can move nitrogen rapidly down through a soil profile, those nutrient leftovers should remain available to a fall-planted wheat crop, Scharf added.

His wheat isn't complaining. In 2019, Arnusch grew an award-winning field of irrigated winter wheat that topped out at 210 bushels per acre (bpa). Nor has his farm's overall winter wheat average yield suffered without fall nitrogen applications; it ranges between 55 bpa on the dryland and 130 bpa under irrigation.

That's something Scharf wants more wheat farmers to examine. Last year, he analyzed a series of field experiments at four different locations in Missouri over two years. Nitrogen was either applied all at planting, all in the spring, or it was split -- with a third going on in the fall and two-thirds in the spring. The researchers tested two rates: 80 lbs. and 120 lbs.

Putting nitrogen on in the fall can also free up time in the spring, when fieldwork gets busy and the windows of good weather can be scarce. This year, the uncertainty of spring supplies also has growers favoring fall nitrogen applications, simply to be sure of getting the nutrients on while it is available. And in the semi-arid regions of the country, such as eastern Colorado and western Kansas, you're less likely to lose much fall nitrogen to leaching, Ruiz Diaz said.

But then again, those are places where nitrogen is also likely to remain available to growers in the fall from summer crops, without any fertilizer applications. And although spring supplies and prices remain uncertain this year, in general, moving to spring applications may help dryland farmers utilize Arnusch's strategy of keeping resources out of the field until they're most likely to pay off, Ruiz Diaz added. "A lot of our farmers in western Kansas head to the field in February and March and evaluate what is out there -- do we have the moisture and yield potential to invest more in this crop?"

As you move into higher-moisture environments, where nutrient leaching is more common, the benefits of moving nitrogen applications to springtime become even more evident, Scharf noted. In some states, regulators have taken note, and are pushing growers to deliver nutrients in season, when nutrient loss is less likely. (See DTN story here: https://www.dtnpf.com/….)

For growers who are considering moving away entirely from fall nitrogen applications in wheat, or moving their spring applications closer to the critical jointing stage, Scharf has one final piece of advice: Have a backup plan.

Editor's Note: This story was originally published on Nov. 6, 2020, and is being reprinted for the 2021 season. See the original here: https://www.dtnpf.com/…. 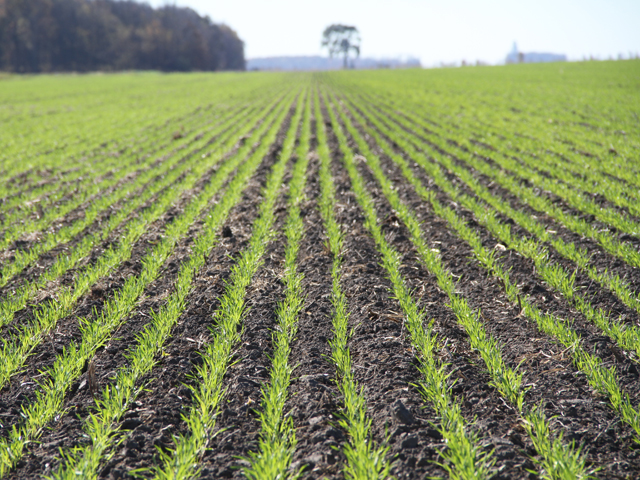